Jacó Rustico: Keeping it Tico-style in a touristy town 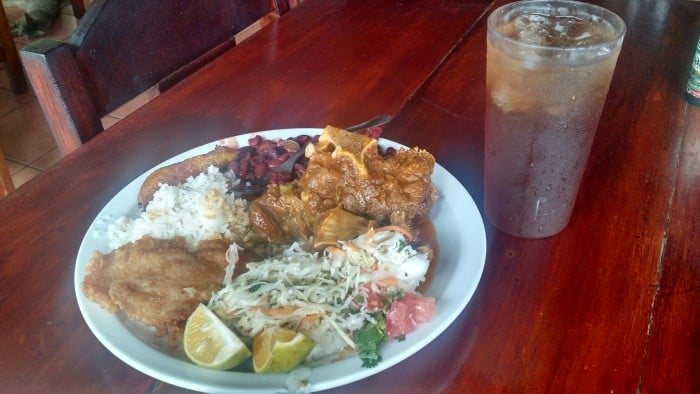 JACÓ, Puntarenas — When a line of locals runs so long it spills out onto the street, it’s always a good sign for a restaurant. At Jacó Rustico – a beachside soda, or typical Costa Rican-style restaurant – that constant stream of diners has been pouring into the family-owned diner for 13 years now, a lifetime for any establishment in this fast-changing town.

For the entire hour I was at the restaurant Sunday, the line never got shorter, as crowds of Ticos piled in to have lunch, mostly traditional plates like casados and beef stew.

Cashier Karen Salas Umaña started working at the restaurant when her sister Kathia and brother-in-law Wagner Díaz opened it more than a decade ago. The owners were in the United States on the day I ate at Jacó Rustico, but Salas, who normally runs the cash register and the front of house, takes over anytime they’re out of town.

As the crowd continued to boom, made up largely of regulars who know the staff by name, Salas and her team of servers kept customers satisfied with the quality food and service they’ve become known for.

“They say that first of all the food is very good, the price too, and the treatment is very personal,” she said. “We get a lot of regulars who always come and say it’s like being at home.”

Normally when I’m visiting the coast, I avoid the traditional-style food so prevalent in San José in favor of restaurants with foreign chefs or fresh seafood. But when I saw the line out into the street from Rustico, I knew I’d be remiss in not trying out a place that clearly has the locals’ approval.

Of the more than 100 people who passed through the restaurant while I was eating lunch, maybe three were foreigners. Salas said she gets more foreigners on weekdays, and she’ll be getting a lot more when the high season cranks up in December.

“There’s people that come from the United States, for example, and they come directly via a taxi from the airport and go straight to here,” she said. “And they say, ‘We’ve heard about your restaurant in our country.’ We don’t exactly how or why, but it’s a good fame to have.”

The restaurant employs up to 15 workers, which seems like a good idea on this crowded Sunday at the beachside diner, which stands about 100 meters from the sand.

Salas said the restaurant is able to make Ticos feel like they’re getting a top-notch version of home cooking by using fresh ingredients from local and national vendors. In keeping with the family theme, Salas’ aunt Estrella Umaña is the long-time chef, who uses family recipes for each one of Jacó Rustico’s dishes.

On top of being delicious, the plates are extremely inexpensive. My mountain of food included a piece of fried fish and beef ribs, which were complemented by a flavorful marinade, on top of rice, beans and salad for 3,000 colones, or just under $6.

Karen said Jacó Rustico was one of the first sodas to open here and experience sustained success. More than a decade later, with competition alive and well in this bustling tourist town, the family restaurant is doing as well as ever.

“There’s something special about this business,” she said. “There’s a lot of other good restaurants here in town, but still people prefer to come here.”