Cuba: This is not your Papa Hemingway’s Havana anymore 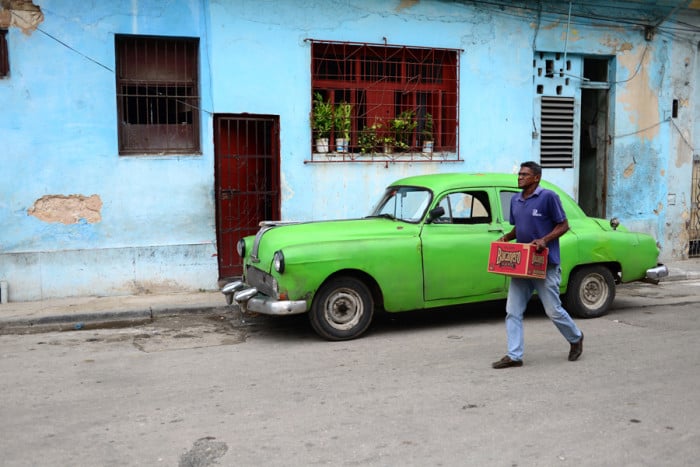 A man carries a case of beer through the streets of Havana. (Allison Voigts/The Tico Times)

HAVANA, Cuba — On a Friday night in Havana during the recent Biennial Art Exhibition, I watched a young performance artist contort herself as symbols of Cuban identity were projected onto her T-shirt — first an old-timey car, then Che Guevara’s iconic visage and the white star of the Cuban flag — until ultimately she tore the T-shirt away from her body and stood half-naked before us.

I was visiting La Fábrica, a multilevel art and music complex in Vedado, a middle-class neighborhood west of Havana’s center. Young, hip Cubans and gray-haired artists passed from room to room sipping daiquiris and examining the photographs, paintings and performance art. I could hear snatches of German, French and Italian as small groups of Europeans drifted through the halls.

“If you don’t mind my saying it, they want to come here before all the Americans,” said Elaine Guzman, a 28-year-old Havanan who, like many of the highly educated young people I met, speaks four languages.

In the rush to visit Cuba “before everything changes,” I traveled to Havana at the height of the monthlong Biennial, when the city was flooded with international artists and collectors. And while my friends and I dutifully toured the Rum Museum and downed mojitos in Ernest Hemingway’s favorite haunts, we quickly learned that Havana has more to offer than the rote sites travelers have been visiting for the past 60 years.

Much of the attraction of Havana is undoubtedly its locked-in-time look: Baroque buildings painted cream and pastel pink decay like collapsing birthday cakes. Mid-century Chevys and Chryslers rumble past in electric shades of purple and green.

Aside from the occasional political slogan—“Socialism or Death!” “Fidel, always Fidel!”—there are no billboards. Without Internet or air conditioning, Habaneros spend their free time in the street or in public parks playing chess, arguing baseball news and talking with neighbors. In five days I didn’t see a single person looking at a smartphone.

At the recommendation of Pico Iyer — who wrote extensively about the island during its “Special Period” of economic crisis in the ’90s — I stayed at the Hotel Inglaterra, a creaky old behemoth surrounded by the classical domes and towers of the Capitolio, the Gran Teatro and the Museo de Bellas Artes.

Straddling the line between well-preserved Old Havana and more decrepit Central Havana, it proved to be an excellent base for exploring the city by foot. In the maze of unpaved side streets, I passed vendors selling bananas and avocados from carts, and people lined up outside panaderías with their ration cards.

According to a long-running joke in Cuba, the three greatest accomplishments of Fidel’s revolution were health, education and sports; the three greatest failures were breakfast, lunch and dinner. Fortunately, with a loosening of restrictions on private eateries in the past five years, good food is becoming easier to find in Havana’s paladares, or family-run restaurants.

At the most famous of them, La Guarida — where the touted celebrity visitor isn’t Hemingway but Rihanna, who traveled to Havana last month — reservations are required. At others, such as the more off-the-beaten-path Restaurante La Casa, set within a retro pink-and-white home in Vedado, we were the only diners. Appetizers of fried malaga and octopus ceviche filled the table as we waited for our entrees of succulent lamb, lobster and red snapper.

Owner Alejandro Robainas, a suave Havanan with a faint resemblance to Fabio, seemed thrilled to be hosting a group of U.S. tourists and supplied us with decade-old Havana Club rum and recommendations for local discotecas. Like all of the Habaneros we met, he sees U.S. tourism as an opportunity.

The Cuban convertible peso, which tourists use to pay for everything from hotels and restaurants to taxis and tour guides, is the equivalent of an American dollar and worth 25 times as much as the regular Cuban peso (the currency with which Cubans at most jobs are paid). The discrepancy allows a growing number of independent workers in the tourism industry, such as guides and taxi drivers, to earn more than a doctor or a lawyer.

Though I wasn’t planning to purchase any art, I found Havana’s galleries — which range from venues like La Fábrica to less formal artist’s studios — to be some of the most dynamic places in the city to spend an evening. After running across a group of tango dancers on the Paseo del Prado pedestrian street, I followed their advice to visit El Ojo del Ciclón, the studio of local artist Leo D’Lazaro.

D’Lazaro describes himself as needing human activity around him to create art, as evidenced by the low hum in the studio. Several couples tangoed slowly around the room with their eyes shut, while a group played dominoes in a dimly lit corner. A girl in a long dress swayed back and forth on a swing that hung from the ceiling. Two young men excitedly spun the rods of a foosball table, its players replaced by grotesque figures, and someone served Cuban espresso from a tray.

On the T-shirt of one of the young men were the words “Hemingway no vino aquí” — Hemingway didn’t come here.