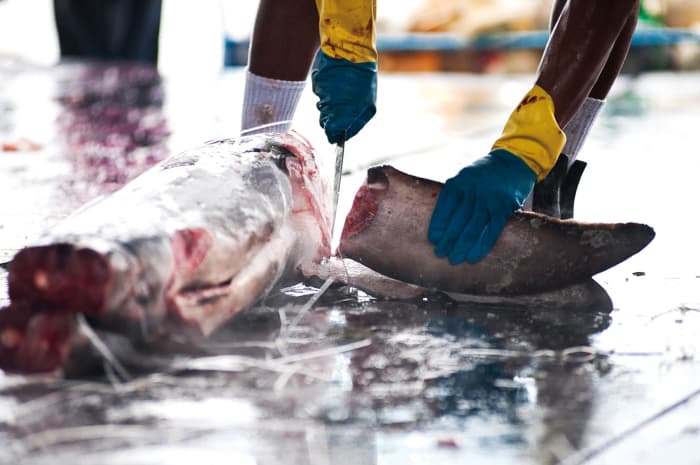 Shark finning at a private dock in Puntarenas in 2010. (Francesco Vicenzi/The Tico Times)

Foiled again! For the third year in a row, Costa Rica has been omitted from the list of “The World’s Ten Best Ethical Destinations” in developing countries, as measured by an organization called Ethical Traveler.

The San Francisco-based nonprofit, which seeks to use the economic clout of tourism to protect human rights and the environment, offered an unusually detailed explanation of why Costa Rica was left off the list.

“Much research and hand-wringing went into our decision to omit Costa Rica in 2016,” the organization said on its website. “Though we admire the country’s many green initiatives, and agree that it is one of the most environmentally progressive countries in the developing world, our annual award is given not just for reputation but for progress — deeds, not words. By this standard, Costa Rica has been static or losing ground on some of its most celebrated initiatives.”

Among the specifics cited by Ethical Traveler:

Ethical Traveler says it makes its list based on countries “that are doing the most impressive job of promoting human rights, preserving the environment and supporting social welfare – all while creating a lively, community-based tourism industry.”

Here are the countries that did make the list of “World’s Ten Best Ethical Destinations” in developing countries, in alphabetical order:

Greenwald left Costa Rica “deeply impressed with the country’s aspirations, and aware of its many challenges,” the report says.

But the organization offered a laundry list of reforms that it would like to see Costa Rica act on before it considers restoring Costa Rica to the list:

However, Ethical Traveler also cited many areas in which Costa Rica has made good progress, including clean energy, forest protection, equal rights, access for the disabled, rule of law and LGBT freedom.

“Costa Rica truly is a Destination of Interest, and we sincerely wish to see it reappear on our Top Ten list,” the report says.

Asked for comment by The Tico Times, the Costa Rican government issued a lengthy response to Ethical Traveler’s report.

On the issue of shark protections, the statement cited a rebuttal to international criticism previously published on Nov. 24.

“The government of the republic of Costa Rica sharply denies that there has been a decrease in shark protections,” wrote Gustavo Meneses, executive president of the Costa Rican Fisheries Institute.

“The export (of hammerhead shark fins) has not been declared in the public interest; it was indicated clearly that we made a one-time exception to CRAC-CITES [the Convention on International Trade in Endangered Species of Wild Fauna and Flora] criteria, while awaiting a finding that extraction of this species was not detrimental, according to Article IV of the CITES convention,” the statement says.

Noting that Costa Rica previously campaigned for the inclusion of the hammerhead and silky shark in Appendix II of the Convention on Migratory Species, the statement said the government’s position is that absent a scientific finding that certain species of sharks are in danger in the eastern Pacific Ocean, it would not support a ban on their harvest.

“We recognize that there has been a historical abandonment of indigenous people by the Costa Rican state, yet that hasn’t stopped the present administration from taking on the challenge of assuming these debts of the past, many of which require structural reforms that affect the interests of other groups,” Zúñiga wrote. “Nevertheless, our only goal is the fulfillment of their human rights and the state’s responsibility to guarantee improvements in their living conditions.”

Zúñiga cited four priorities the government has identified: formulation of a policy on lands, territories and resources; the creation of a mechanism to consult with indigenous populations; generating open lines of dialogue with indigenous peoples; and strengthening government coordination to bring attention to indigenous groups.

The government statement also cited at length the steps it has taken to combat the sexual exploitation of minors by tourists, although this was one area in which Ethical Traveler actually praised the country.

Finally, regarding justice for the slain Jairo Mora, the statement said this matter is currently being adjudicated by the courts.