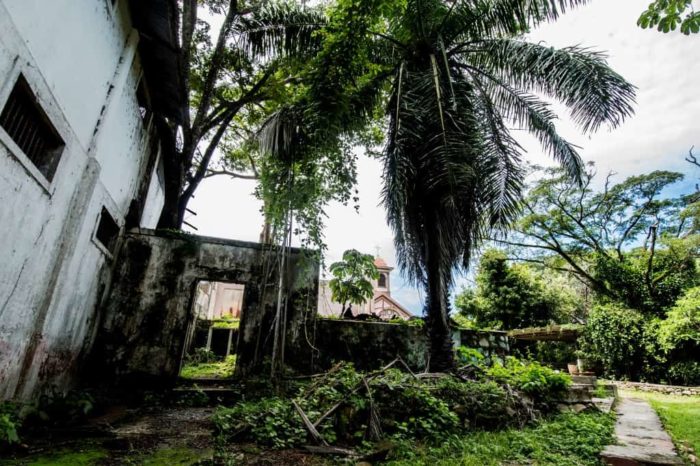 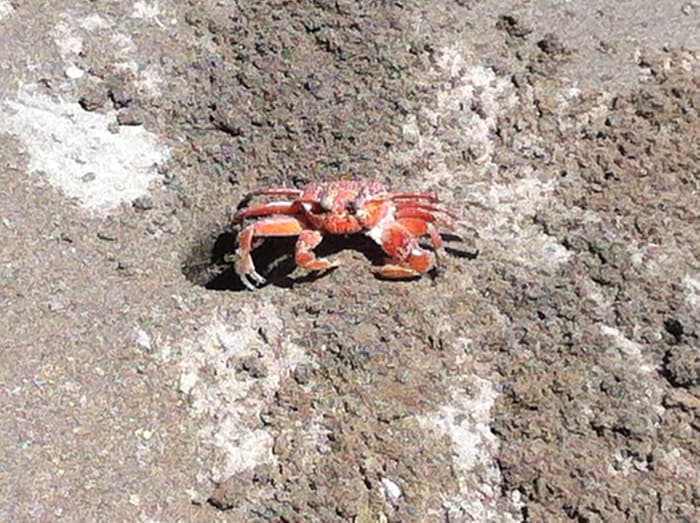 A stare-down with a crab at Playa Uvita. (Karl Kahler/The Tico Times)

But pound for pound, the little red and purple crabs that scuttle from hole to hole at Playa Uvita provide one of the most entertaining wildlife visuals you can easily find in this country, and on this beach in particular, you can find them by the thousands, if not the millions. Compared to the cute, green tree frogs that adorn the covers of guidebooks, this crab just might be the Rodney Dangerfield of Costa Rican species — “I get no respect!”

As you walk along the beach, you will see innumerable pill-size balls of sand radiating outward from crab-size holes dug by these busy little crustaceans. And you will see countless 1- to 2-inch crabs scuttling and scattering before you as you walk. They are not dangerous — unless you grab one, in which case you’re going to feel some pain. These crabs have two powerful pinchers in front of their eight legs, a defense mechanism that has served them well, judging from their abundant numbers.

In “Rocky II,” Rocky Balboa trained for a title fight in Philadelphia by trying to chase down a chicken. In Costa Rica, Rocky could just as well have trained by trying to catch a crab.

I tried it, and the crabs ran like crazy. One big crab I chased on the open beach broke into a sprint, tried to dive into a crab hole, found it occupied by another crab, and broke for another hole.

Another crab weirdly stood his ground staring at me with his eyestalks, no matter how close I came. I thought he might be blind, but as I walked around him he circled with me, claws up. Then he started advancing — at which point I backed off, thinking this crab was too crazy to mess with. Ballena Marine National Park protects 110 terrestrial hectares and 13,300 marine hectares and has four main entrances, the most popular of which is at Playa Uvita. This is where you’ll find the Whale Tale, an unusual land formation jutting into the ocean that looks just like a whale’s tail — convenient for a place where humpback whales come every year to mate. In fact, this is said to be the only place where humpbacks migrate from both the north and south, from California to Antarctica. Playa Uvita is a great beach, and on this three-day weekend (Saturday on Costa Rica’s Labor Day weekend) there were hundreds of people making the most of it. Buying my way in for $6, I saw that the nationalities in the registry were almost all Costa Rican.

“This is a three-day weekend, so we almost always get more nationals than foreigners,” said Evelyn Arroyo, one of the park rangers at the entrance. A Tico in one group tried to carry in a big ice chest, and the ranger asked him if they had any liquor.

“No,” the man lied, clutching the heavy ice chest with both arms.

“But I saw a bottle of guaro,” said the park ranger, and he cited fines of hundreds of thousands of colones for having liquor in the park.

“We’ll put the liquor in the car,” the man said, turning back.

Arroyo remarked on the white hawk that had just landed in a tree across the path. I asked what kinds of animals were found here. And how many Homo sapiens?

“In the high season, about 3,000 people per day,” said the other park ranger, Senem Alemán.

So there are lots of people on the beach, but it’s a big beach, where you can find plenty of places to work on your tan, brave the big waves or relax under a coconut palm.

But if these crabs ever organize and attack en masse, the humans are doomed.