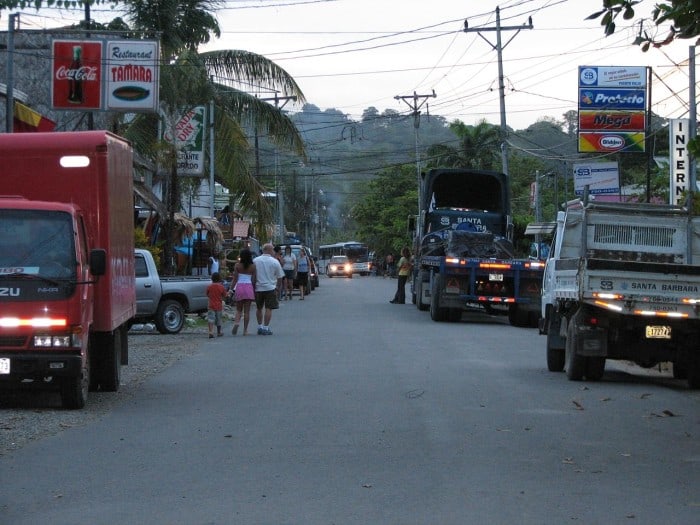 Businesses in the tourist town of Puerto Viejo have reported major dips in clientele and sales after heavy rains hit the area. ((Courtesy of Flickr))

Heavy rainfall and flooding have cast a dreary situation over Costa Rica’s Caribbean coast in the past few weeks. With roads closed and tours canceled because of severe weather that triggered a national emergency, tourism numbers in Limón province’s coastal towns took a hit.

But those in the industry, despite having reported sizeable losses in clientele and sales, say they remain optimistic in hopes of brighter skies ahead. Leda Villa, vice president of Cahuita’s tourism chamber, said the attention generated from the devastating weather could make the government focus more on supporting tourism in popular Limón cantons like Talamanca in the future.

“Yes it’s another opportunity for people to look at the problems in the Caribbean and the Talamanca canton but it will be worth the pain because now they might take it more seriously and have better planning,” she said. “This area is one of the most important recipes that keeps Costa Rica alive, especially with its environment.”

Whether it be stories of drug trafficking or violence, the province and especially its coastal towns receive a steady steady of negative news coverage. For local entrepreneurs, who say the negativity is unfair and hurts their businesses, the national emergency is just another hurdle to overcome.

It might be impossible to stop Mother Nature, but Villa says area businesses also suffer from lack of support from the national government when it comes to allocating resources and putting preventive measures in place.

“For many years Limón has been the precarious province for Costa Rica,” she said. “For the government, for the Costa Rican tourism board (ICT), we are precarious. And it’s true because they would normally never take a second look at our towns.”

Paolo Mora Streber, who has owned Caribbean Tours Puerto Viejo in the popular beach town for eight years, said her business lost an estimated $1,000 last week because of the heavy rains. The tour company offers snorkeling and scuba diving tours, as well as trips to Cahuita and Bocas del Toro, all of which had to be cancelled last week.

“There might still be tourists that were coming but they were going to be bored since they can’t do these tours like snorkeling or scuba diving,” she said. “It’s a little difficult to be able to accommodate them with the hard rains.”

However, in keeping true to the optimism that permeates through Puerto Viejo’s chilled-out atmosphere, Mora said at the very least she got a forced vacation.

“It’s hard to look at it positively but at least it’s like a little break for us here after the high season,” she said.

Another tour company in Puerto Viejo, Terraventuras Jungle Expeditions, had to cancel up to 20 reservations from last week, according to receptionist Gloriana Quintanilla Meza. She said the cancellations for normally high-selling tours like rafting and snorkeling added up to about $2,500 in lost sales.

Though weather seemed to clear up on the coast during the weekend, new rains early Monday morning forced Route 32, which connects the Central Valley with Limón, to close for the third time since rains began two weeks ago. As late as Monday evening the only open roadway connecting San José with Limón was Route 10 to Siquirres.

“I don’t pay much attention to road closures now because they can clear it up so quickly,” said Colin Brownlee, co-owner of Hotel Banana Azul in Puerto Viejo. “I’m just in awe of how quickly they can deal with these big situations.”

Brownlee said last month generated his hotel’s lowest reservation numbers for a June since he started eight years ago. But, he added, area tour operators and hotel owners have gotten over tough times before, mainly spurred by negative publicity. As Brownlee said, it isn’t just foreign tourists who can relate Limón to images of crime and drugs.

“The really big problem over the years was the Costa Ricans themselves,” he said. “Either business-wise or through their own internal fears, they would discredit the Caribbean. Our biggest challenge has been to win over the hearts and minds of locals, not foreign tourists.”

In nearby Cahuita, which celebrated its 100th birthday on Sunday, the third annual Calypso Festival signaled a hopeful break from tumultuous weather as Costa Ricans converged on the small beach town to celebrate traditional music and culture.

“We get a lot of bad propaganda aimed towards us, but we just had a three-day festival and there was not even one problem the whole time,” Villa said.

For the Caribbean region, where 32 percent of the population is considered to be living in poverty, according to the 2014 census, tourism is a critical source of well-paying jobs. Now a region and a country waits in hope that the heavy rains that stalled business don’t return.

And when the skies do clear up, as Villa says, the area’s beauty can again speak for itself to attract tourists.

“We might not have tourist services of the highest quality or five stars, but maybe it’s even more stars because of all the stars you can see in the sky.”