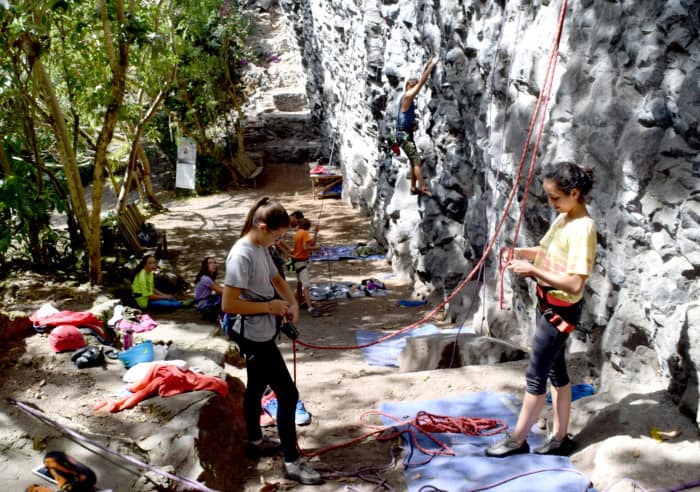 Though rock climbing is fairly new to Costa Rica, this rising sport has many talented climbers, and some are training a new generation to get to the top.

Swedish climber Pernilla (Penny) Andersson and her Costa Rican climbing partner and boyfriend Jorge Leal are two passionate athletes who want to spread this sport as far and wide as possible, and to train beginners in what it takes to go climb a rock.

Andersson started working at the European School of Costa Rica in Heredia last August as a rock-climbing trainer. There she trains about 50 students, ages 4-16, four days a week. The school has a fully equipped gym with its own artificial rock-climbing wall.

“We arrived yesterday and we’re just climbing so they can feel the rock,” Andersson said. “Today, with the two most experienced guys, we are practicing leading and falling.

“At the gym we train in strength and technique. Here, we are focusing on mental control, which is really important in climbing. It’s like 80 percent of it. I want to show them that it’s not just about climbing the hardest routes; there are other things that are important too. I want to open their minds, and show them it’s not just about getting up there, but all it involves.”

“I kind of like everything about climbing, like how exciting it is,” said Mariana. “And how you always have to be paying attention. I think it’s a good idea to exercise, you know, training, working and getting better.”

Andersson and Leal became climbing partners last August, when Leal told her he was going to Mexico to climb the magnificent Time Wave Zero cliffs in the state of Nuevo León. Andersson decided she had to go too.

They trained together for a few weeks to achieve their goal of climbing Time Wave Zero, one of the longest routes at El Potrero Chico in Mexico. It’s about 2,100 feet high and has 23 pitches, meaning roped climbs between belays. (The belayer is the person above who controls the safety rope.)

“It’s quite important to know your partner, because up there you will barely see her/his face,” said Leal. “This will help to know on which type of route each of you is better while climbing, and this will improve your climbing.”

The couple managed to climb Time Wave Zero on their first try, a feat that very few Costa Ricans have achieved, in an impressive time of 10 hours.

They made their trip along with four other climbers: Mexican Amilkar Moncada and Costa Ricans “Calado,” Andre and Adrian Brenes.

“This was the most life-changing experience ever,” said Andersson, who also wrote about the experience for Avate Women, a blog designed to empower female climbers.

This is the highest rock the couple has climbed so far. It’s a difficult test for climbers, and was a complete success for them, even though they had some troubles during their trip. For example, they ran out of water before rappelling back down, and they also found a snake in the middle of the route and had to change course a bit.

“Penny is super-strong, and she has been an athlete for her whole life,” said Leal, proud of his girlfriend. “She does gymnastics, and traveled from Sweden to Spain by bike. She has done pretty amazing and extreme things in her life.

“I haven’t done things like that. I have practiced mountain bike, downhill, but the farthest I’ve gone is to Parrita, that’s not the same as Sweden to Spain. So, when we got to pitch 21, I was so euphoric and started screaming ‘Yes, we did it!’ and then I completely lost all my energy. So, while we were rappelling down, I fell asleep three times! (Penny was so worried.) Until we stopped at one spot and recovered a bit.”

The group started their climb on Nov. 17 at 4:15 a.m. with few problems besides the snakes, climbing “solid and steady to the top.”

When they reached the top, rather than being dead-tired, they were full of adrenaline and energy, proud of their achievement, and enjoying a view few people will ever witness.

Both of them agree that to become a good climber you don’t need a “perfect body.” To them, the only thing you need is passion.

“You must be really looking forward to it,” said Andersson. “Get out of the comfort zone. If you want to try it, then just do it. It doesn’t matter the size of your body or anything, you can become a great climber if you want to. And, man or woman, it doesn’t matter, because you are working with your body. You have to learn how to carry your own body weight.”