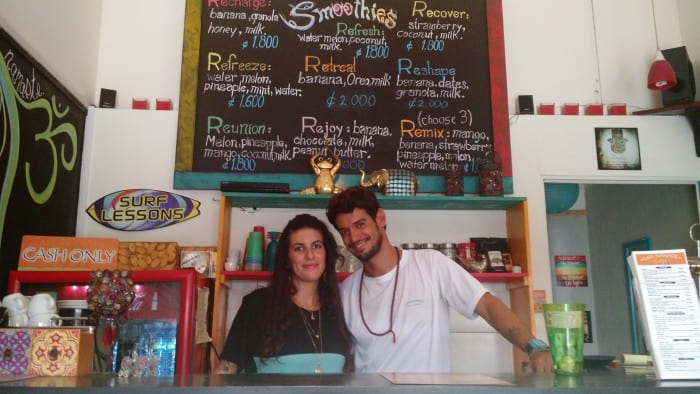 JACÓ, Puntarenas — When the chef comes out from the kitchen he is wearing board shorts, flip-flops and a beaded necklace that hangs down past his chest. He sits at the far table, the one halfway out the open-air entrance that leads to the beach, and explains to a young foreigner the surf lessons he gives on the side.

The words “Where there is love, there is life,” a quote from Gandhi, are painted in rainbow coloring behind them under Cafe Namaste’s main bar. As the heat sweeps through the eight-month-old Indian restaurant tucked into one of Jacó’s side streets, chef Niv Turgeman quickly switches his attention from one passion to another as he gets up to proudly show off his spice collection. Like a kid marvelling over his gifts, he holds up each bag of spices directly sourced from Jaipur, India, to explain their distinct value.

Mustard and cilantro seeds, along with a diversity of curries and powders, are just part of the ingredients essential to Namaste’s featured dishes like the Baba Ganush, chicken curry and Goa masala fish. Tahini, which is sourced from Lebanon at a price of $200 per unit, Turgeman said, is key to the homemade Baba Ganush and hummus. But why pay that much for something as simple as tahini when you could just add water in its place for free?

“You know why? Because we don’t cut corners,” Turgeman said.

He and his wife, Noa, opened the tiny restaurant that only fits six tables for two to pay homage to the tastes of their home country, Israel, and to India, where Niv traveled extensively. And through that unique arsenal of spices and flavors, the dishes deliver a large impression on the eater despite the place’s limited size.

“Intentionally I wanted a small place with a small menu,” he said. “Everything here on the menu comes from the tradition of its region or its culture.”

The masala fish, for instance, is a recipe Niv took from traveling through the Goa beach region of India where he would go out and buy ingredients before knocking on strangers’ doors and asking if he could come in and cook with them. The fish is cooked under a bed of whole milk before it’s served with a sauce of Indian spices, ginger, garlic, and coconut cream that does not envelop or override the fresh protein’s taste. When served with chile dulce, rice and lime wedges, its a light lunch that is much more fitting for a humid day on the beach than pizza or nachos could ever be.

“We want to have more options for the vegan people and vegetarian people,” Noa said. “We’re trying to keep options for them as well since there’s a lot of American food here like hamburgers, and fried food where everything they have is fried in oil. We’re trying to be a little bit more healthy.”

Turgeman is an Israeli chef and culinary adviser who worked in kitchens all over the world, from Italy to China, until settling in Costa Rica. Before opening up Cafe Namaste, he worked as a chef at the five-star Río Perlas hotel in Orosi, Cartago.

Namaste, as the menu notes, is the all-encompassing Hindu greeting and farewell used for friends and strangers alike. Niv tells the story of traveling through Goa, where he met a poor boy on the beach and asked the child where his favorite place was to eat in the village. The boy took him to a shoebox-sized place, Niv said as he used his hands to invisibly mark off a section of about five square feet, where the kitchen’s entire offering cost just $20.

He bought everything on the menu and wrote down in a notebook what ingredients and flavors he would take away and which ones he could do without. The boy then became Niv’s assistant for the next week as they toured their way through Goa’s restaurants, marketplaces and homes in search of the best flavors.

The chef said that experience was one of the strongest inspirations behind Cafe Namaste’s unique menu. And now in honoring classic Middle Eastern and Asian fare with spices direct from the region, the little cafe is lifted to new heights.

“It might be a small place, but it’s the flavors that are big,” Niv said.