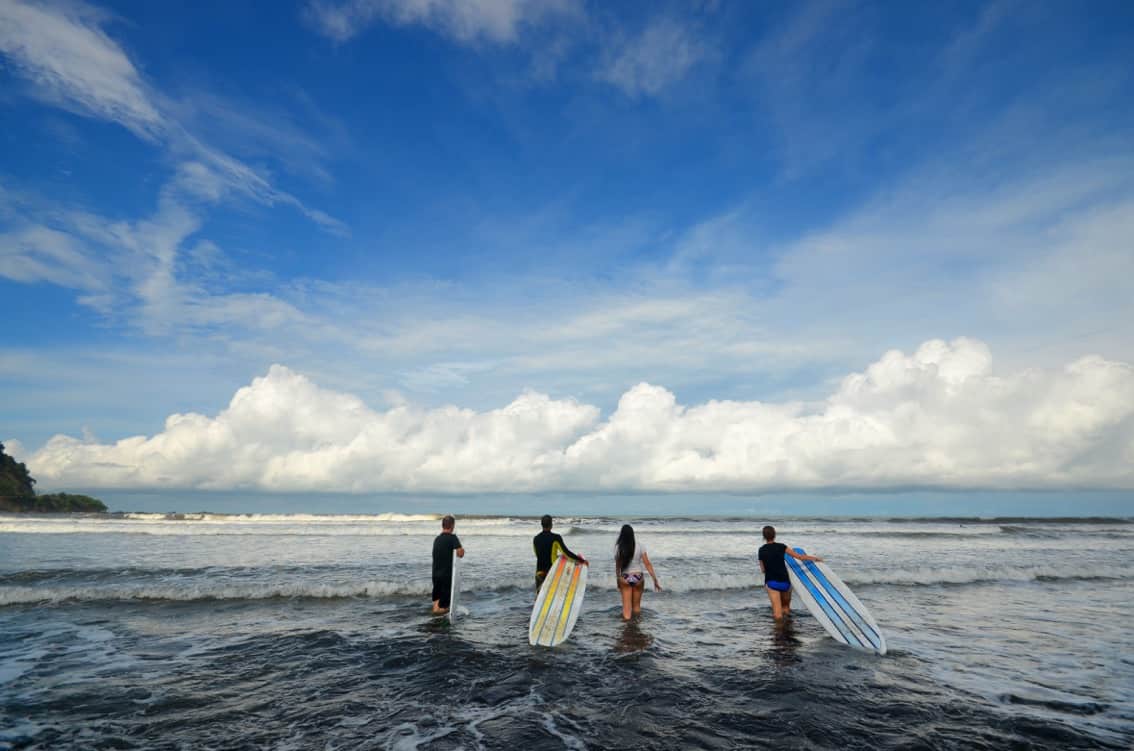 I pushed myself up, slid my feet along the board, then angled my heels. I felt my back instinctively arch, my arms elongate into the position of an archer. My posture mimicked every surf movie I had ever seen, but effortlessly, as if my body had waited 35 years for this moment to pose. I was standing so high that I felt vertigo, and the wave pushed me along, a velvety glide toward the shore. For an instant, I remembered what it was like to balance on a bicycle for the first time – the same breeze, the same smooth propulsion. My throat struggled to emit a triumphant laugh, but it seized.

The wave dissipated, the board slowed, and then I stepped off, tumbling into the froth. The board drifted away, tugging at the leash attached to my ankle. Now I could laugh, fully and from the diaphragm. A cackle drowned in the ocean’s noise.

I stood up, I marveled. I stood up on the first try!

Surfing has always been exotic to me. Having lived most of my life in cold, landlocked places, the absence of oceanfront and warm weather made surfing seem like an impossible fantasy. Until I spent time in Costa Rica, I had never really seen surfers in person. When I saw surfers, they were on TV, flipping off crests and speeding through “tubes” with ease. Aside from furrowed brows, pro surfers betray no anxiety that cubic tons of water are curling around their fragile bodies, threatening to crush them. I couldn’t even imagine it.

The first time I visited Jacó, I saw surfers on the bay. Some were skilled, skidding along the breaks and hurling themselves into the air, but most of them were not. They stood up, they fell down. They perched on their boards and let the waves roll under them. They bobbed in groups and chatted. Most had regular body types, and some were even flabby. The waves in Jacó are gentle and long, not the 20-footers I had always seen in calendars. It dawned on me that most surfers are casual amateurs, just as most basketball players play pickup games on neighborhood blacktops. I spotted a hairy, middle-aged guy venturing into the waves as he dragged a longboard behind him. If that guy can do it, I thought, I can do it.

Then I had my chance: My friend Andrés had business in Jacó, and we decided to make a weekend trip. Andrés said he could schedule a free two-hour class for my wife Kylan and me, thanks to an arrangement he had with a local hotel.

“We’re gonna be surfers!” we exclaimed to each other periodically as the day approached.

We were elated, because an unthinkable dream would soon come true. We liked the simplicity of surfing – boards are affordable, and daily rentals are downright cheap. Gear is simple, and a single rash guard can last for years. There is no need for cleats, pads, helmets, or sticks. There is no engine to maintain, no fuel to buy, no special gloves or shoes to replace. The arena is free and as big as the ocean. A surfer requires no judge or spotters or ball boys or caddies. Barring the threat of riptides, a surfer can throw on a swimsuit, grab a board, and spend hours alone in the water.

Surfing also has its own culture, which comes with rituals and vocabulary, and although I never imagined saying phrases like “Eddie would go” and “Mad backhand, bro,” I liked the idea of chilling at cabanas with longhaired friends and bragging about the day’s exploits. Serious surfers carry with them a mystical optimism that I’ve always enjoyed.

Of course, Costa Rica is also the perfect place to learn how to surf. The beaches are packed with toned young wave-riders, and they come here from all over the world. Costa Rica earned global fame in 1966 with the release of “The Endless Summer,” a surf documentary of biblical renown, which featured the country prominently. All over the world, surfers ache to visit places like Puerto Viejo and Malpaís. And here we were, a reasonable drive from either coast.

But we also had no idea how we would fare. Kylan and I both love solo sports, and we are both skilled alpine skiers, yet this felt completely different. Most sports have static environments, like a field or court. Most outdoor activities have predictable courses that change only slowly; runners and rock climbers can see oncoming storms, snowboarders can anticipate an icy day. In contrast, surfing changes every second. Each wave is distinct from all others. The height and power and arc of a single wave will never be repeated, and there are always exceptions to the pattern. The one thing most athletes can trust – the ground beneath their feet – is the surfer’s greatest adversary.

We took our first lesson with Dante (not his real name), a petite-yet-muscular instructor from Venezuela. A rising sun bathed the beach in rosy light. Dante unloaded the surfboards from his truck, asked a few questions, and cut to the chase.

In preparation for our first lesson, Kylan and I had watched a few YouTube tutorials about the “pop-up” – the act of lifting oneself into a standing position. Since most video footage of pro surfers takes place in mid-glissade, I had never really noticed the first stage of the process. Dante demonstrated how to lie on the board, where to put our bodies, and how to hold the sides. The pop-up was a lot like a push-up, and the movement felt graceful. Dante refined our positioning with each attempt. “Robert, remember to angle your feet,” he advised. “Keep them closer together, or you won’t be able to keep your balance.”

The practice rounds felt silly, since they took place on the dry sand, but we knew that there was no better way to do it. We stood up over and over, spreading our arms as we had seen in a hundred beach movies.

When Dante was satisfied with our progress, he guided us toward the water. We lugged our longboards, which were larger and heavier than we’d expected. Where downhill skiers graduate to longer and longer skis, surfers do the opposite – with increased skill, the board itself generally shrinks. Pro surfers sacrifice the stability of a longboard for the dexterity of a short board. As we tromped through the lukewarm water, the longboard felt gigantic, like a polyurethane raft wedged under my armpit.

We waded our to our chests, and Dante gave us our final instructions. He held my board and signaled when I should crawl atop it. He watched the horizon for swells, but I had no idea what he was looking for. This was part of the art of surfing – knowing which waves would crescendo just the right way and launch the board forward.

After my first successful pop-up, I looked back and saw Kylan lift herself to her feet. Like me, she only sustained herself for a few seconds before tumbling into the foam, but I shouted toward her, “Awesome! That was awesome!” It’s always exciting to succeed at something new and unfamiliar, but surfing was something else. We doggy-paddled back into the water, and Dante prepped a few more runs. Our pop-ups improved with every attempt, and when we finally toddled to shore, we felt victorious.

“We’re totally going to be surfers,” I proclaimed at lunch. Our destiny seemed clear.

For weeks we boasted of our astonishing new skill. We bragged to our parents over Skype. We compared anecdotes with friends who had also taken one complete surfing class. We catalogued longboard prices and considered buying a roof rack for our car. We imagined our new life as itinerant beach bums, working remotely for half the day and waiting for a local stoner to call through our bungalow window, “Surf’s up, mae!”

After long delays, we scheduled a second class with a different instructor. He had us demonstrate our pop-ups on the beach.

“Huh,” he said, nodding approvingly. “You look like you know what you’re doing.”

Kylan and I traded knowing smiles. Of course we know what we’re doing. We’re freaking prodigies.

Showing off for our new instructor was our downfall. Rico (not his real name) escorted us into heavier breaks, and he taught us how to roll onto our backs, hugging our boards, so that the waves could slosh over us. Dante had (wisely) not covered this step, and we burned so much energy fighting through the current that we were soon exhausted. Rico had us straddle our boards and float for a few minutes, then he told us to get into position. We hadn’t realized how much effort Dante’s grip had saved us. Now that we were fending for ourselves, the waves felt anarchic. Kylan has never been a strong swimmer, and my upper body has atrophied since my adolescent swim classes.

After 20 minutes of watching us flail, Rico ushered us toward a calmer stretch of water. He looked disappointed. We were not the budding surf champs he had expected, just a couple of rookies who knew how to stand up on a level surface. Rico did exactly as Dante had done, holding our boards and signaling when to paddle. We had regressed. We were back to training wheels. Rico looked increasingly bored as he gave us banal suggestions: “Okay, maybe bend your knees a little more. Keep your feet closer together. Try standing more in the middle…”

An hour later, we could barely lug our boards to the waiting truck. Our arms dangled, our jaws were slack, and we yearned to collapse in the sand. We had finished our first class in triumph, but now we had tasted real surfing, and the waves had wrecked us. Perhaps we had no future after all.

A few days later, I stumbled into a collection of quotes by famous pro surfers. Many were funny. (“I surf to get tan,” said Shane Dorian). Others were startlingly profound. (“We’re all equal before a wave,” Laird Hamilton). Hamilton also said, “Wiping out is an underappreciated skill.” I cherished his modesty, considering Hamilton is among the most famous surfers of all time, and he has routinely surfed 11-meter swells – roughly the height of a three-story building.

But it was Phil Edward, surfing pioneer and co-star of “The Endless Summer,” who impressed me most: “The best surfer out there is the one having the most fun.”

Despite our ruinous second attempt, we had had fun. And we would again. Come hell or uncomfortably high water, we would try surfing a third time, and maybe one day, we’d get to try the shortboard. Robert Isenberg is a writer and photojournalist for The Tico Times. Based on his travelogue “Pura Vía,” his new column will chronicle travels in Costa Rica and beyond. Visit him at robertisenberg.net.