Peeling the mango: An expat relearns how to cook 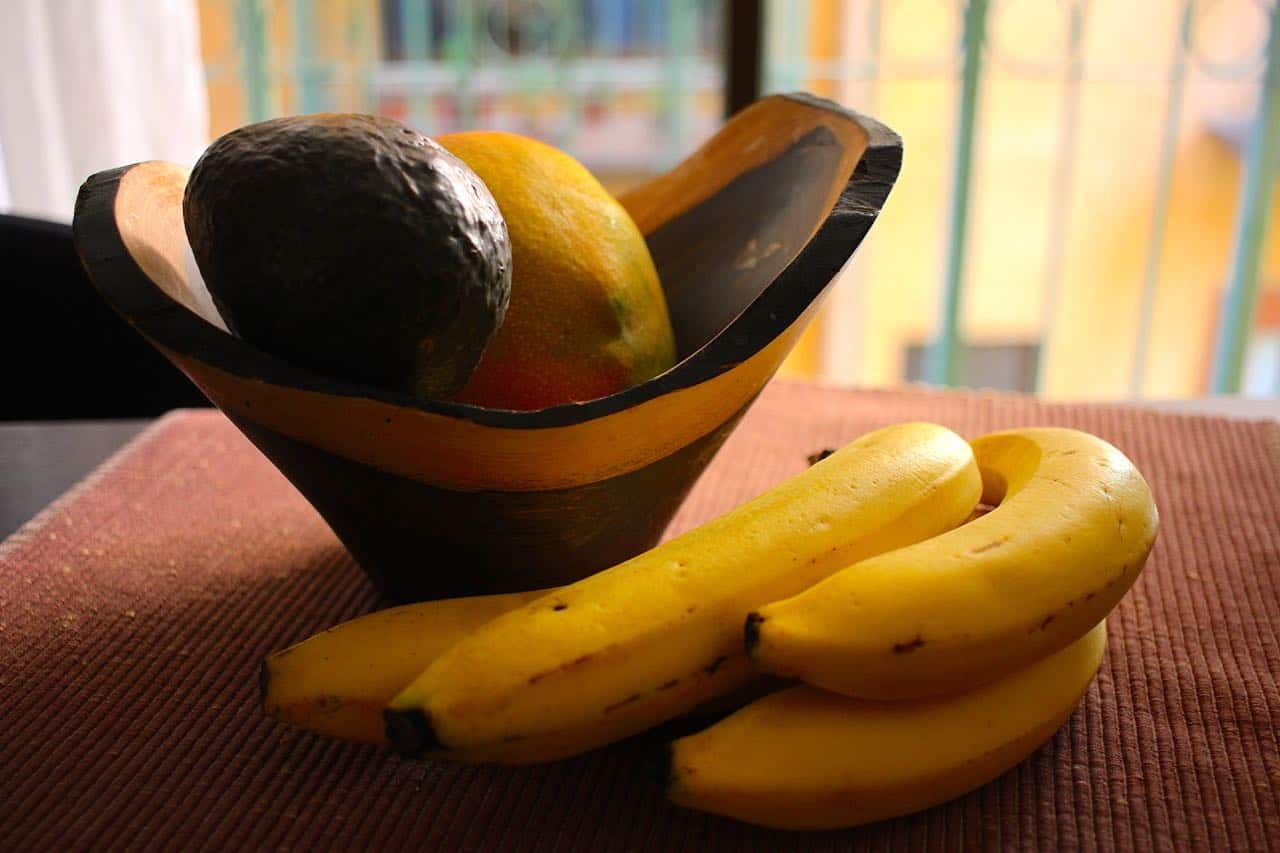 We sat on the beach in Puntarenas, watching the waves roll in. The sun was high and hot. A cruise ship crouched in the water, at the end of the long wooden pier. The vast stretches of brown sand were peppered with people – families on beach towels, a police officer, and men pushing carts full of coconuts.

“You want a mango?” asked my wife Kylan.

Kylan drew the mango from our bag and dug her thumb into the skin. Then she ripped the rind open, exposing the frizzy orange meat within. Kylan did this effortlessly, tearing away the yellow-and-red outer layer and piling its abstract pieces on the sand. Then she bit into the naked mango and rent away a chunk.

We traded the mango back and forth, and as I tasted its ripe sweetness, letting the rivulets of juice crawl down my forearms, I felt for the first time that I was really living in the tropics. Here, on the oft-forgotten waterfront of Puntarenas, beneath a blindingly bright sky, we could eat a mango as freely as monkeys. Kylan had learned to pick and eat mangos during a high school service trip to Cuba. Her hosts had picked dozens of fruits from roadside trees, stripping and eating them whenever they felt peckish.

This was an unexpected aspect of traveling in Central America, something I hadn’t considered before I arrived: I had to learn how to eat. Sure, back in the United States, my neighborhood supermarket had had its share of tropical fruit and “Latin” ingredients, but I had never really considered how such produce was cultivated, much less how to eat it. For years, I had bought the occasional mango in Pittsburgh and cut away the skin with a knife, the same way you’d peel an apple. This method was slow and laborious and made no sense. Meanwhile, I had never imagined frying a sliced banana, and I had never seen bananas growing on a finca, where blue bags protected the bunches from pests. I had never seen an actual coffee bean, I had no idea what a cacao pod looked like, and – most embarrassingly – I thought that pineapples grew in trees, like coconuts.

From the moment we arrived, we had to relearn the very idea of food.

When I turned 23, I finally decided to learn how to cook. I had lived in dorm rooms and crummy tenements, where kitchens were primitive or nonexistent. I was tired of microwaving dinners and wanted to learn my way around the kitchen. For motivation, I thought, What do I want to eat? The answer was instantaneous: sushi. I bought special rice, sheets of seaweed, and a bamboo mat. I learned how to wash sticky rice and spread it out with a wooden spoon. I asked a fishmonger what kind of fish to buy, then added vegetables and sesame seeds. Through grueling trial and error, I learned how to cut the roll into individual pieces. It was an odd foray into culinary arts, but I loved the process. A few maki rolls later, I was hooked.

Since then, cooking has become a favorite hobby. I’m not a very sophisticated chef, but I love trying a peculiar new entrée. In most U.S. cities, grocery stores are stocked with a rainbow of international foods, and although I struggled to find, for example, the teff flour required for Ethiopian injera bread, I could track down almost any kind of vegetable, spice, oil, or grain I wanted. I had a favorite Indian grocery and Mexican bodega. The renowned Wholey’s Fish Market stood only a block from the Lotus Asian market. And this was Pittsburgh, a landlocked city without much diversity.

Then I came to Costa Rica. The first time I walked into a supermercado, I felt the disorientation of a lucid dream. The whole store looked rearranged. Items I had expected to find anywhere – like tofu – were hard to track down, while items I had never much thought about – like mayonnaise – came in a hundred different varieties. I could buy entire sacks of rice with pocket change, ditto tropical fruit, but a block of Swiss cheese might cost ₡5,000. All of the produce I had ever known was inverted in price and quantity; star fruit and papaya were now dirt cheap, while a bag of grapes cost as much as two gallons of milk. Fruits that I had seen only once or twice in my life, such as dragon fruit (pitaya) and lychee (mamón chino) were routinely available.

After our first trip to the local frutería, a shack by the side of the highway, we took a photo of our bounty and posted it on Facebook. Back in Pittsburgh, my friend Fred saw the picture, observed the fuzzy lychees, and commented: “What are you eating, the Lorax?” We had never actually made hummus before. We devoured this bowl in a single, 10-minute sitting with a bagful of plantain strips. Robert Isenberg/The Tico Times

In a way, this is one of the great honors of expatriate life: As Costa Rican tourism becomes increasingly luxurious and all-inclusive, fewer travelers ever step foot in a Costa Rican supermarket, or even an authentic Tico restaurant. The four-star fusion platters served in a resort are generally delectable, but you’d be hard pressed to find seared tuna steak in a wasabi-butter reduction sauce at your local soda. It’s possible for a tourist to spend a week in a Guanacaste hotel without ever trying gallo pinto.

But the selection also posed a challenge. First I had to learn a completely new vocabulary, and then I had to learn the foods I had never heard of, like maracuyá, guanábana, and tamarindo. I had to erase my presumptions, like thinking that gallo pinto and “rice and beans” were the same thing, or that everyone knew what I meant by “salsa.” In many ways, the aisles of Auto Mercado were exactly like those of Giant Eagle in Pittsburgh, with their familiar boxes of Cap’n Crunch and jars of marinara sauce. But then I’d see a container of rompope – Costa Rica’s sweeter, ever-available version of eggnog – and I’d feel like I’d entered a whole new world.

“Can I show you something?” said Beto, my compañero at The Tico Times, when we ran into each other in the office kitchen. He had been watching me struggle with an avocado and finally took pity.

“Sure,” I said, handing over the halved avocado and a butter knife.

I had been trying to remove its pit by cutting around the edges and digging it out with my fingers. Beto drew a larger knife from the cutlery set, aimed it at the avocado, and chopped the blade into the pit. The knife stuck fast. Then he twisted the blade, and the avocado easily loosened and came free. Then Beto smacked the knife’s handle against the lip of a trash can, and the pit shot off the blade and vanished. It was one of the simplest, most elegant gestures I’d ever seen in a kitchen.

“That is amazing,” I murmured reverently.

Until I lived in Costa Rica, avocados were a source of endless frustration. They don’t grow in Pennsylvania, and imported avocados are usually rock-hard, like ovular green rocks. We would leave them on the windowsill above the sink, waiting for the avocados to ripen. Then, in the span of a day, the avocadoes would darken and disintegrate. The meat would bruise and blacken, until all that remained was an odiferous mush. Each avocado might cost $4.

Here, Kylan and I could buy ripe avocados and eat them the same day. Once, during a restaurant’s grand opening in Brasilito, waiters handed out avocados from platters. Each fruit had been cut in half and scored with a knife. Where the pit had been, the depression was filled with pico de gallo salsa. I scooped bite after bite out of the avocado, holding the tough skin like a makeshift bowl, which was soon empty. I marveled that such an uncomplicated preparation could taste so good, as if nature had designed the avocado to be eaten exactly like this. The more time I spend in Costa Rica, the more I use these strange ingredients to my advantage. We would never have attempted lentil burgers or Thai green curry had bags of legumes and cans of coconut milk not been so plentiful. We were no longer distracted by the frozen vegetables and heat-and-serve dinner kits we had once bought from Trader Joe’s. We missed many of these things: We yearned for a bag of frozen Asian dumplings with their packets of hoisin sauce, because they had been so easy to boil up and serve to guests. When we didn’t feel like cooking, we missed having our pick of a dozen all-you-can-eat Indian buffets. But we could live without those things, if it meant trying something new – learning, for example, to de-pit an avocado with a big knife.

One afternoon, Kylan received a recipe from her mother: banana pancakes. While I have grown to love bananas and plantains, I have never liked foods that are simply banana flavored. If we were going to mix something into pancakes, they should be a familiar North American fruit, like blueberries.

“No, it doesn’t have bananas in it,” Kylan corrected. “It’s made from bananas.”

Since my earliest years, making pancakes on Sunday morning has been a sacred ritual in the Isenberg household. My Dad is a pancake master, and even today he will slip into the kitchen around dawn, play a vinyl record of Vivaldi’s “Four Seasons,” and fry up towers of flapjacks. Growing up in Vermont, I came to think of such flannel-clad mornings as a universal part of life. Indeed, my parents even make their own maple syrup. Armed with my mother-in-law’s new recipe, I mashed up bananas and eggs. The instructions required no flour, no buttermilk, no salt or baking powder or obscure grains. All I had to do was mix two ripe bananas and four eggs, then pour the batter into the pan. I had no idea what to expect; the concoction crackled and bubbled on its oily bed, more amoebic than circular. A sugary scent filled the room, along with the haze of steam.

I placed the plates on the table and poured sugar-free fruit juice – a drink I now consume by the liter. We poured generic syrup and cut into the pancakes, and then we took our first tentative bites.

“That is delicious,” Kylan said.

They were some of the tastiest pancakes I’d ever eaten, a perfect blend of New England inspiration and Central American fruitage.

Robert Isenberg is a staff writer for The Tico Times. Keep an eye out for his next book, “The Green Season,” in print soon. Visit him at robertisenberg.net.