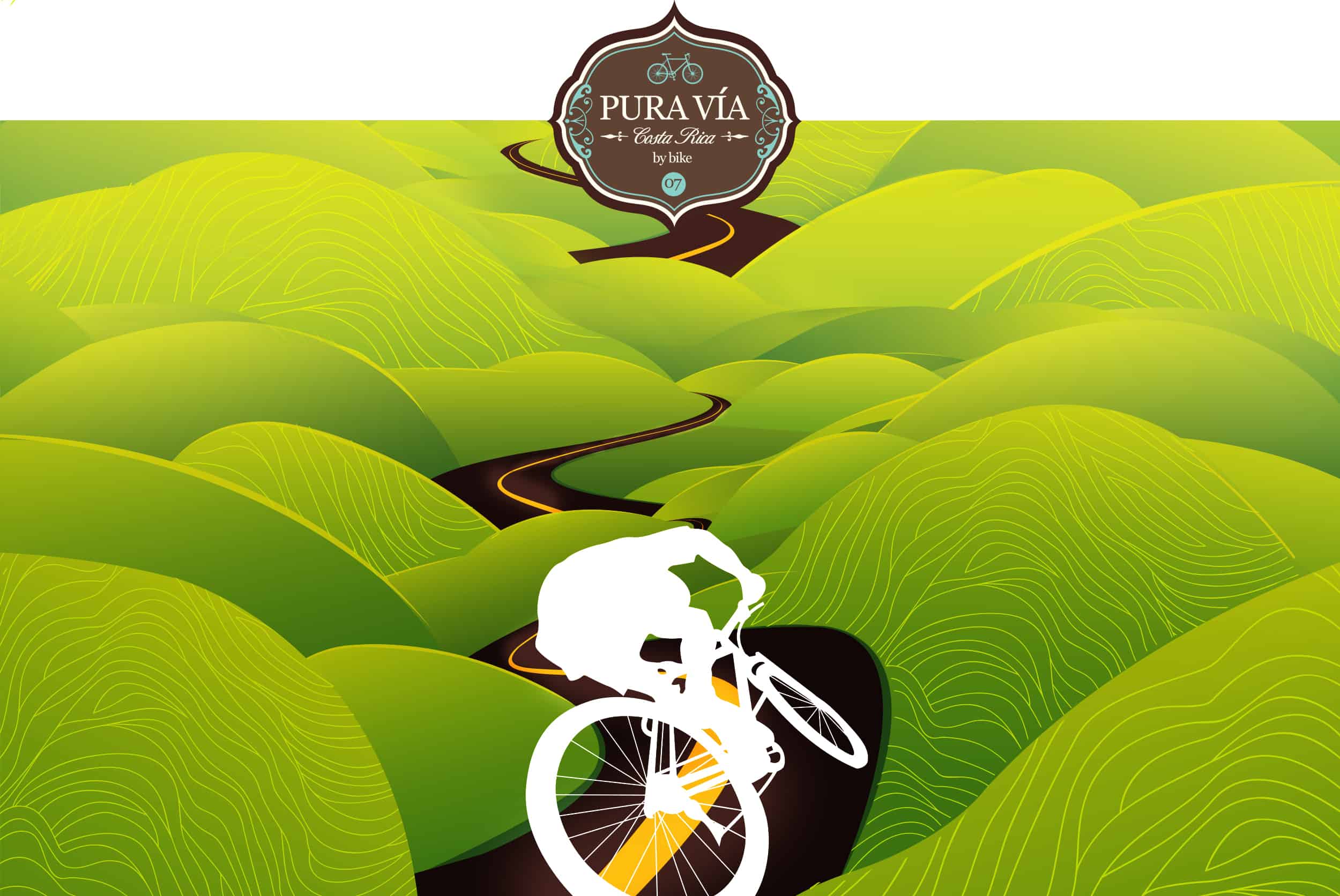 At breakfast, I unfolded my map and traced a squiggle of road from Puerto Viejo to Ciudad Quesada. The road formed a “V” shape, dipping south, then ricocheting north again. It looked long but manageable.

And hell, I felt good. I sipped the last of my coffee, pushed my bike into the street, and pedaled toward the hazy hills.

Within a few kilometers, the honeymoon was over. Flat road morphed into hills. Slowly, the real punishment began.

The first time I came to Costa Rica, two years earlier, I took the bus from San José to Alajuela Province, and as the enormous vehicle groaned its way through the mountain switchbacks, I actually thought: Man, I’m so glad I’m not biking here. That would be insane. Now I was cycling those very same roads, and the way was torturous. Gradual slopes rose steadily toward the foothills, which transformed into brutal S-curves carved into the escarpment. I pushed down on my pedals, one rotation at a time, as the walls of exposed rock and red topsoil crowded around me. Trucks crept up behind me, their engines roared, their wheels struggled to climb the crest, and within seconds I was swallowed in billows of dust.

After three full days of continuous riding, my body revolted: My calves boiled with lactic acid, my shoulders slumped, my spine ached, and my sunburned forearms were seared in the midday sun. The roads felt empty and remote, except for a few scattered houses and strands of telephone wire. When I finally reached the apex of a long hill, my body was stiff with pain. I dismounted woodenly and nearly fell in the grassy ditch. I huddled by the side of the road, covering my ears when truck engines belched behind me, and sucked down half a liter of water.

A shadow swept over me, and I looked up to see an enormous bird. At first I admired its slow glide in the highland winds, but then I realized the bird was circling me. Two more birds joined it, making slow figure-eights above. When the thermals receded, the birds hovered close, and I could see their crooked heads. They were not hawks, as I had thought. They were vultures.

Well that’s fitting, I thought, and gulped the rest of my water. The road to San Miguel de Sarapiquí is an endless slope flanked by houses and lawns, and by mid-afternoon, I could no longer endure its gradient. I pushed my bike the last mile, until I reached an intersection that hugged the mountaintop: Take one road, and I would head toward Poás Volcano. Take the other, and I’d ride toward Ciudad Quesada, also referred to as the canton of San Carlos, my destination for that night.

My clothing was drenched in sweat, and my stomach rumbled. I collapsed into a table at the local soda, and the owner gave me a glass of water.

“Where are you coming from?” he asked.

The owner nodded knowingly. His name was Marco, and I liked him immediately. Marco was middle-aged with a sage expression. He looked calmly engaged with his surroundings, like a Little League coach. When I invited him to sit down, Marco grabbed us two Imperial bottles and settled into a chair. His establishment, Los Gallitos, was located directly on the street, and it was relieving to watch traffic ease past the broad windows, a safe distance from me and my bike.

Marco told me about his life – how he left his urban home in the Central Valley more than 20 years ago, settling in this hilltop village. He and his wife loved living here, because they enjoyed the fresh air, the small-town atmosphere. Marco said the road had only been paved in the past decade, and while they appreciated the spike in business, the traffic had exploded.

“Where are you going?” Marco asked.

“Today?” He shook his head gravely. “Don’t go there. It’s too big, too many people. And on the bicycle, there are too many hills. You should go to Aguas Zarcas, and then to La Fortuna. Much more relaxed. Much flatter.”

“I don’t have to go through Ciudad Quesada?”

“No,” he said, rolling his lower lip. “Just go north from Aguas Zarcas. But you should go tomorrow and stay here tonight.” He pointed at the moody gray sky. “It’s going to rain soon, and you don’t want to bike through that.” Los Gallitos was a restaurant, Marco said, but he had also built cabinas into a retired farm, just a couple hundred meters down the road. I wanted to decline – I still had some daylight, and I didn’t want to fall behind schedule – but my body was too beaten up to press on. The idea of biking, or even climbing onto my seat, made me shudder.

When I finished my casado lunch, Marco revved his car, and I managed to pedal the last stretch down the road, following him toward the cabinas.

As I coasted around a curve, I spotted a dark shape in the corner of my eye. My contacts were foggy from overuse, so at first I thought the animal was a dog, but then I recognized its simian movements as those of a monkey. Marco’s car slowed as the primate plodded ahead, slipping into tall grass and disappearing into the underbrush. The El Gallito property stands atop a grassy outcrop, where cows nibble the grass and the surrounding rain forest is cacophonous with birds. The small swimming pool had been drained, and the air was too cool to swim anyway. I had no desire to explore the town of San Miguel, and the vanishing sun left no light to read or write. The cabinas had no Wi-Fi, and my phone had patchy service.

All for the best, I thought.

I turned a heavy wooden recliner toward the jungle and seated myself on the edge of a concrete patio. I cracked open a liter bottle of Pilsen and sipped it slowly, watching the sky darken. My body went limp, and I finally felt myself relax. Ever since I left Playa Amarilla, four mornings earlier, I had pressed so aggressively into Costa Rica that I hadn’t really paused to appreciate it. I’d felt single-minded about my mission, about meals and lodging and the constant switching of gears, about applying sun block and taking breaks and snapping pictures of photographic scenes. Now it was nightfall, and I had nothing to do but sit here and listen to the rain forest. In the darkness, sound replaced sight. The only visible thing was the vague outline of distant trees.

A thick-bodied dog meandered toward me, sniffed my beer bottle, and climbed into a nearby chair. He settled into a circle of fur and wheezed contentedly. A soft breeze kept the mosquitoes at bay. The traffic had finally quieted on the nearby ridge. I hadn’t felt so at peace, so far away from real life, for a long time. When I finally retired to my cabina, covering myself in two layers of woolen blankets, I fell deeply asleep – as if I were home, in my childhood bedroom, on a cold February night. Pura Vía is an 11-part travel series about biking across Costa Rica. Check out the next episode on Sept. 3. For previous chapters, click on the map above the story.