Caballeros: Taking the reins for the first time 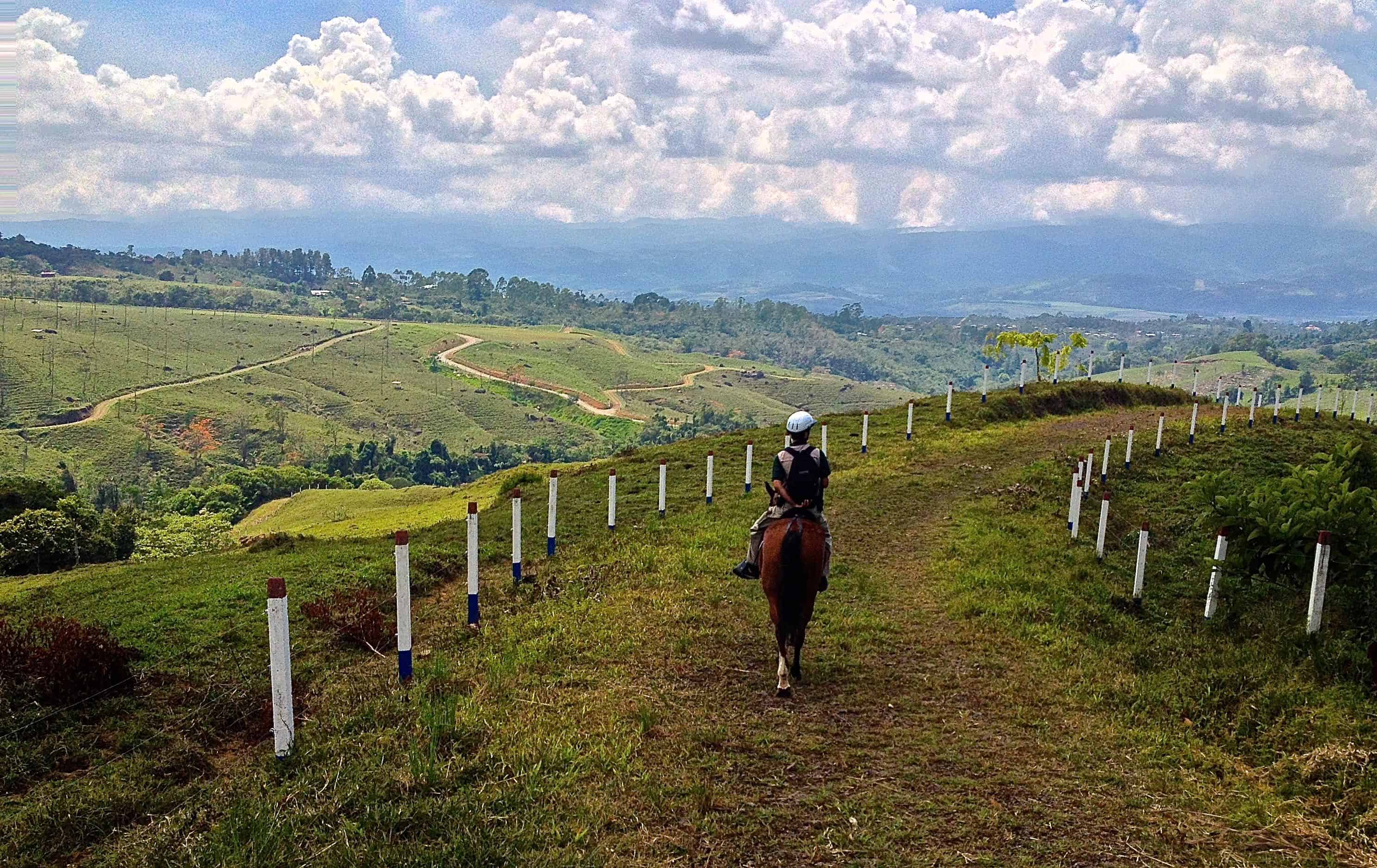 “When you mount the horse,” said Eric, “you grab the saddle on both sides, like this.” He cupped his hands over the leather lips of the saddle. “Then you put your foot in the stirrup and lift yourself up.”

With a straightening of his knee, Eric levitated off the ground, then slowly swung his second leg over the horse’s back. The movement was as smooth as a dancer’s. He clasped the reins in both hands, then added, “You should always have at least one hand in control. The other hand can be free. But you must always have a grasp on the reins.”

As Eric instructed me, I looked at the horse, and the horse looked at me. I could see my distorted reflection in her black marble eyes. Her name was Duquesa (“Duchess”) and she was as fine a mare as I had ever seen: medium-sized, snow-white, and groomed to perfection. When Eric pulled gently at the reins, Duquesa’s head veered in that direction. When Eric tapped his heels against her haunches, she took a few steps forward. Her movements were robotically precise.

“Sí, listo,” I said. But my apparent calm was deceiving. I wasn’t just ready. I had been ready – waiting for this very moment – for years. A stableman prepares one of the AltaGracia horses for an outing. Robert Isenberg/The Tico Times

I grasped the saddle, just as Eric had demonstrated, and lifted my foot. The stirrup was higher than I expected; my toe missed the mark, and I nearly lost my balance. But then I kicked higher and fitted shoe into ring, then straightened my body and threw my other leg over the horse’s spine. In those final seconds, the movement felt as natural as straddling a bench.

“Does that feel all right?” Eric asked, eyebrow raised.

Eric nodded his approval, threw himself onto a second horse, and trotted briskly down the path.

At long last, I nudged Duquesa’s abdomen with my shoes, and we jolted into motion, toward the open road.

I grew up next to a horse farm. Horses were everywhere in Vermont, grazing on hilltops and clopping down country roads. Friends of mine took riding lessons. The Morgan Horse Farm stands 10 miles from my parents’ front door. And yet, despite so much proximity, I had basically never ridden a horse.

Once, when I was 13, my Dad took my brother and me on a road trip to Montana. We stopped at a horse farm and signed up for a tour. I was a shy and lazy teenager, and my only motivation to ride the horse was to impress the guide, a pigtailed teenager with rosy cheeks and a big smile. I didn’t impress her, though, because I couldn’t get the horse to move. I slouched uselessly over the animal, mumbling, “Come on… come on.” The horse ignored me, instead dipping its face into grass and chewing loudly as a dozen other riders disappeared into the prairie, including my Dad and brother.

The problem was that I didn’t want to hurt the horse. I was too timid to take command. The arrangement struck me as awkward and unfair. Why should I kick a horse in the ribs to make it move? Why should the horse have to take me anywhere at all? What did it get out of the arrangement but a slop bucket at the end of the day?

But my attitude has changed over time. Now older and more hardened, I appreciate the tough-love relationship between horse and human. Nearly two decades after my equine malfunction in Montana, I had a foggy dream about riding. In the dream, a mysterious voice said it was my “destiny” to learn to ride a horse. It was as close to a spiritual vision as I’ve ever had without chemical stimulation. Since then, I have been on the lookout for a decent place to saddle up.

When the opportunity arrived, it came as a complete surprise.

During a visit to AltaGracia, the not-yet-open luxury hacienda in San Isidro de El General, the management suggested I visit their stables and take a tour. When the hotel opens in June, its “equestrian experience” will be one of its hallmarks. The estate boasts 840 acres of rolling countryside, and gravel paths crisscross the bucolic landscape. The dynastic Esquivel family has built a vast home for their steeds, complete with generous pens, washing stations, veterinary chambers, and a spacious central court.

By the time we reached the stables’ front entrance, on a sunny Friday morning, I was giddy with anticipation.

Riding a horse for the first time is a potpourri of unfamiliar sensations. First, you are perched very high above the ground, which is why falling off can be so dangerous. Your legs are splayed unnaturally wide; within a few minutes my thighs tingled and my calf muscles dully ached. The horse’s movements are a constant up-and-down motion, and your brain bounces inside your skull, making you feel dizzy or even seasick.

But the strangest sensation is that the horse is alive. The horse is not a machine, but a living, breathing animal. Horses are smart; they have distinct personalities. As fellow mammals, horse DNA is remarkably similar to ours, and we share 90 hereditary diseases. When you ride a horse, you build a symbiotic relationship with the creature that you don’t build with, say, a bicycle. Each time I pulled the rein, I marveled at Duquesa’s instant change in direction. I could signal this command with the lightest tug. The horse is a powerful species, with a speedy gallop and a deadly back-kick, but they can also be awkward. As we descended the pebbly road, Duquesa stumbled and slid. Her knobby legs quivered as she trudged gingerly down the hill, wary of every loose rock. The going was so slow that I wondered whether I should be more forceful. My old reluctance to kick the horse resurfaced. Wasn’t there a better way?

“No, it’s very different,” he replied, smiling proudly. “There’s really nothing else like it.”

Eric is a trim, bright-eyed young man, the kind of guy who looks game for anything. He’s a skilled horseman, but he didn’t grow up with horses, and riding is only part of a broader repertoire. Eric studied tourism and has led all kinds of groups. When AltaGracia hired him a few months earlier, Eric had a chance to focus on horses and riding.

He nodded enthusiastically. “Oh, yes. Much more peaceful. You have room. Fresh air. Everything is better.”

All around us, the golden fields lay open, and the sky was as blue and delicate as hydrangea petals. The sunblock on my pale skin practically sizzled in the powerful sun. As we slipped into the glade, surrounded on all sides by dense woods, Eric tossed me a water bottle, and I drank greedily. The heat and motion felt good, but I had a newfound respect for all those farmers I’d seen riding down Guanacaste highways.

“Have you ever ridden a horse before?” asked Eric.

“Not really,” I said. “But I’ve wanted to for a long time. It’s interesting, because riding a horse is so associated with being dignified.”

Eric raised an eyebrow. “How do you mean?”

“Well, the Spanish word for a gentleman is caballero. Literally, it’s a horseman. It’s the same in French and German – chevalier and Ritter. Historically, if you were part of the nobility, you were supposed to ride a horse. It was a symbol of dignity.”

Eric grinned knowingly. “There is a sign above the stable. You may have seen it. It says, ‘El hombre que no domina los caballos no se domina a si mismo.’ Basically it means, ‘The man who cannot master a horse has not mastered himself.’” The quote startled and excited me. It was the bold wisdom of a bygone age, back when people were more, well, cavalier. I have met so many people in Costa Rica who have experience with horses – who sound surprised that I have never really ridden one. Even now, I knew I wasn’t really riding a horse so much as sitting on one. These horses were rigorously bred and trained so that rookies like me could feel safe and secure. If the horse were agitated, or if she started running at full speed, I would instantly tumble to the ground and probably shatter a limb.

But as we climbed the hill back to the stables, Duquesa picked up speed. I tightened my grip on the rein as my legs vibrated over the saddle.

Eric laughed merrily. “They knew they’re getting close to home,” he said. “They’re excited to be coming back. You can pull the rein to slow her down.”

Duquesa charged up the hill, her back rolling beneath me, her head bobbing ahead. I loved this feeling, the muscular acceleration, the hot breeze. I touched Duquesa’s head and felt the sweat moistening her hair. It was the slightest hint of what a gaucho feels while galloping across the pampas. It was the wordless communion between man and beast, experienced and fostered for thousands of years. It felt something like destiny.

Robert Isenberg is a staff writer for The Tico Times. Keep an eye out for his next book, “The Green Season,” in print soon. Visit him at robertisenberg.net.