How to stay happy when relocating to Costa Rica 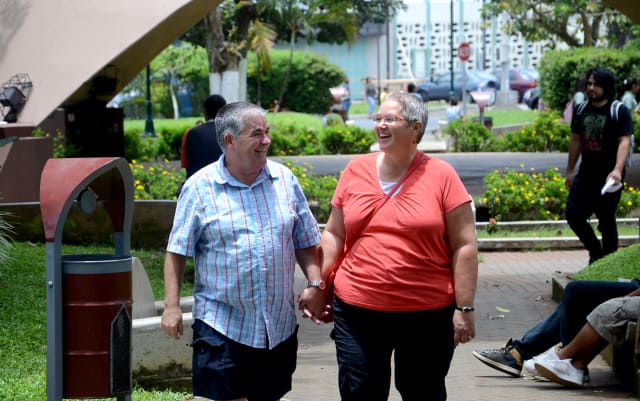 Bill and Kelly retired in Canada and moved to Costa Rica in 2012. They chose the city of Grecia for its good weather and tranquil lifestyle. (Alberto Font/The Tico Times)

Costa Rica is without question one of the retirement dreamlands of the Americas. Retirees from Europe also are increasingly taking notice. But before you start packing your bags, there are a few things to keep in mind. Following are some suggestions to help make your move to Costa Rica a happy one.

Be ready to live in another location

Most transplants tend to move as a couple, leaving friends and family at home. If you don’t make a serious effort to adjust in Costa Rica, you’ll likely end up heading back home once or twice a year to visit everyone. Before you know it, you’re buying a one-way to move back home.

When you move, be ready to start a new chapter in your life. Have friends and family visit you in Costa Rica. They’ll likely be up for it.

Be open and ready to adjust

Moving thousands of miles away from home permanently is no easy task for most people. Life will inevitably be different, for better and worse, so you’ll need to be ready and willing to adjust to the changes as they come. Ticos have their own idiosyncrasies just as every other culture does. If you try to change them, you’ll be fighting a losing battle and be that much more miserable for it.

Costa Rica is renowned and highly sought after by retirees because of its natural surroundings. So it should go without saying that you need to be a nature-lover if you’re thinking of permanently relocating here. Ticos are just as much a strength as the nature, always friendly and willing to help, but this is ultimately a very small country. If you are a big-city person and prefer to live with those comforts and amenities, you might want to reconsider Costa Rica.

Some might be fine with spending the golden years lying on a beach with a silly straw between their lips, but retiring in Costa Rica can mean a new career for some. Think about starting a business, though try to plan everything out as much as possible beforehand. Besides earning a little extra income, this can also help with integrating your family into the local community and making your new town actually feel like home.

The grass is always greener someplace else, even in a country retirees and expats have long fantasized. As Costa Rica becomes home, it’s only a matter of time before something annoys you, and you begin making comparisons to other countries and cultures. Avoid that as much as possible. Because whatever country you’re comparing Costa Rica to probably has its own group of locals wishing life were more similar to Costa Rica. Keep a positive attitude through the thick and thin. After all, that’s the pura vida attitude. Your reward will be, statistically speaking, a longer and happier life.

Lucrecia Cordero has been a real estate professional for over 25 years after working as a journalist and public relations adviser prior to becoming a broker. She also currently serves as president of the Chamber of Realtors of Costa Rica in Guanacaste.