5 reasons downsizing is the new trend in Costa Rica 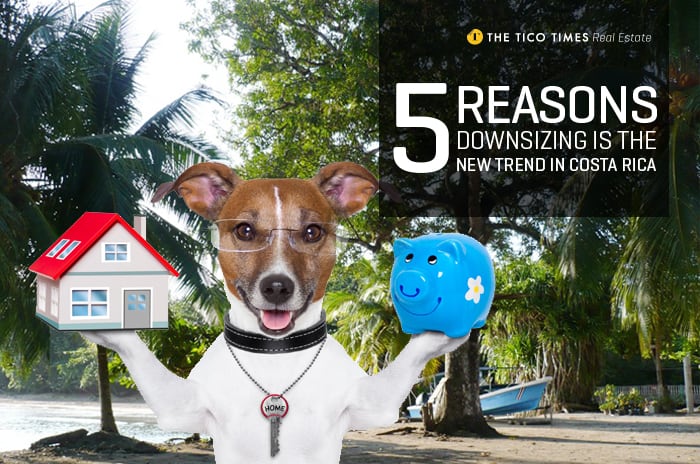 Who ever thought that downsizing would happen in Costa Rica? Downsizing is pretty normal when you plan to move to a big city like New York, London or Amsterdam. In contrast, when I moved to Costa Rica 35 years ago, there were cows in the streets of Escazú, which would be an unusual streetscape nowadays.

But now, for different reasons, many people living in Costa Rica are abandoning larger homes for smaller ones.

Residential developers in Costa Rica have definitely caught on to the trend of downsizing and have redesigned their floor plans into smaller social areas, making the kitchen part of the living/dining areas (open floor plan) with much higher ceilings, fewer bedrooms and without maid’s quarters. This change of lifestyle has also obliged developers to pay more attention to common area of communities or condominiums by including a swimming pool, a gym, larger social areas and other amenities.

Let’s go through the different reasons for downsizing in Costa Rica.

The cost of land and construction has gone up tremendously since 2008, but the purchase of property in Costa Rica has been made much easier by availability of bank financing at a much higher percentage of LTV (Loan to Value).

Home buyers in Costa Rica can now afford higher monthly payments than ever before because of higher income and the rise of dual-income households. But with higher monthly expenses like credit card payments, car financing and a more active social life, many are obliged to live in a smaller dwelling than was common before 2008.

The high level of education in Costa Rica has changed the lifestyle of younger people, who now live on their own at a much earlier age than ever before. While just a few years ago children would not move from their parents’ home before they were married, high-paying jobs now allow them to move out at an earlier age and purchase a home or condo on their own. Young people can now afford to finance and purchase property much more easily.

Because children move out of their parents’ home at a younger age, parents suddenly find themselves living in a house that is too large for the two of them. That has changed their lifestyle and they are now, at a younger age than previous generations, able to travel more often and enjoy life without wanting to be tied to a large home with a lot of upkeep.

Baby boomers, retirees and snowbirds from other countries have the same reasons for downsizing as the empty nesters. The phrase “Less is more,” adopted by architect Ludwig Mies van der Rohe as a precept for minimalist design and architecture, makes a lot of sense when you’re retired and you decide to get rid of extra baggage you don’t need to live a worry-free retirement.

People tend to socialize less, or should I say differently; they spend more time on the internet, their phones or tablets and on social networks like Facebook. Games are played on the computer and not with the whole family, as we did when I was little. Families enjoy socializing in different ways; they don’t have their Sunday family lunch at home anymore, and are more likely to go to a restaurant. I remember when restaurants in Costa Rica were all closed on Sundays, which would be unimaginable today. This is among the reasons we need less space in our homes.

Urban construction is changing the concept of living in Costa Rica, just as it did in large cities in developed countries in the 1970s. Large and modern condo buildings are under construction in San José, Heredia, Alajuela and Cartago, as old neighborhoods are torn down.

Furniture stores carry more modern furniture for urban living than ever before. Architects in Costa Rica are designing a more modern, contemporary style than the customary cookie-cutter colonial style that was customary for so many years, what’s known as “the RostiPollos style.” Downsizing is an important part of that change in the concept of living in Costa Rica.

For more reading on this topic, I suggest this article.

Ivo Henfling founded the American-European Real Estate Group in 1999, the first functioning MLS in Costa Rica with affiliate agents from coast to coast. You can read other articles like this on his blog. Contact Ivo at (506) 2289-5125 / 8834-4515 or at [email protected].