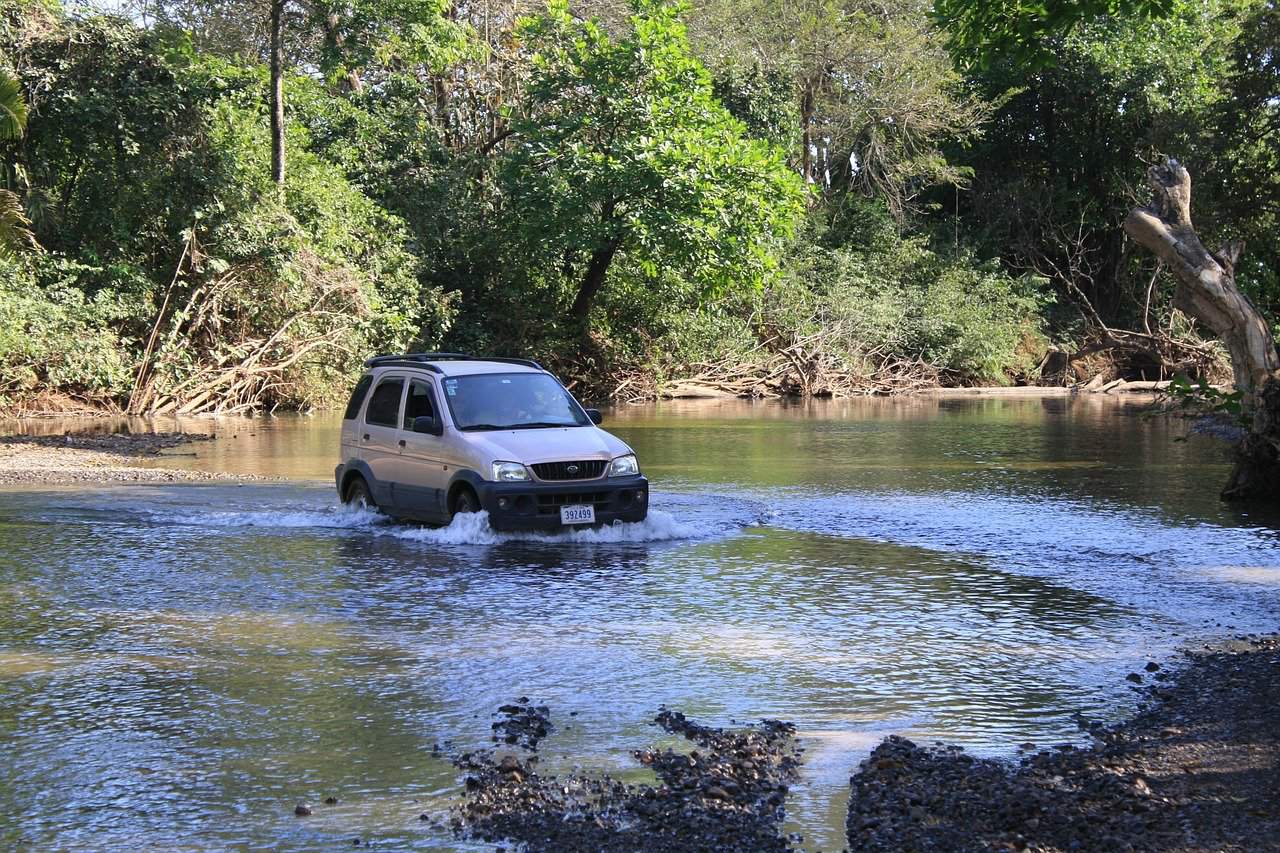 Giant potholes, washed-out roads, drivers passing around blind corners… the list of driving hazards in Costa Rica seems endless. This article is a primer or introduction to safe and competent driving in the country. While not all aspects of vehicle safety are covered here, it is an attempt to touch on the most important.

1. Maintain a high level of concentration while driving

It is easier to maintain a high level of concentration while driving during the daytime; avoiding nighttime driving is therefore advisable. The paved and dirt roads of Costa Rica have many dangerous challenges that are not easily foreseen. Below are a few obstacles drivers frequently encounter, both night and day:

More concentration is needed while on the highways of Costa Rica than one might expect; there are a lot of hills and most of the highways are single-lane. Passing slow-moving, large trucks on hilly highways adds risk.

Driving on unpaved roads or on paved roads in poor condition requires the driver to concentrate on the path of both sets of wheels, left and right.

Be sure to leave some space if you are following vehicles in front of you. If you are to swerve, you need to be able to see if you have room on the shoulder as well as the oncoming traffic in the other lane.

2. Adjust tire pressure for on-road and off road driving

Lowering your tire pressure is recommended for both unpaved roads and paved roads in poor condition. I have found that for passenger cars and trucks, 18-25 pounds of pressure gives your vehicle improved ride characteristics, traction and smoothness to absorb potholes and the washboard effect of unpaved roads. Knowing ahead of time where gas stations are is also helpful for inflating or deflating your tires. Additionally, you will need a tire-pressure gauge.

4. Be aware of dry versus wet season differences

During the dry season (December to April), visibility on dirt roads can be impeded by the high level of dust. Leave an extra amount of space between you and the vehicle ahead to allow the dust to settle or blow aside off the road. Dirt roads also become washboarded and rocky this time of year.

During the wet season (May to November), the roads are in worse condition, paved and unpaved. Water fills the potholes, preventing you from seeing the depth of the hole. If you can’t find a path around all of the potholes, adjust your speed and drive slowly enough so you don’t hammer on your suspension system as you pass through them.

More things on your vehicle will fail or break down in the wet season than any other time. The rain, humidity and poorer quality of the roads all take their toll on your vehicle.

Don’t put off vehicle repairs during the wet season.

A few words about river crossings: the rivers are deeper and faster moving during the rainy season. Most vehicles have the ability to ford a depth up to the center of their wheels, more or less. When in doubt, watch other vehicles cross or walk across the river yourself to measure its depth. If you are still unsure, don’t cross.

Being able to see farther down the road allows you to judge the depth of potential potholes and the presence of other obstacles. This added visibility also gives the driver more time to assess and maneuver around obstacles.

In my experience of having vehicles repaired, I have found that older and less sophisticated machines suffer fewer breakdowns. Older vehicles have fewer parts that can fail, the parts are cheaper and you are more likely to find multiple sources for parts needed. Though electrical and electronic components raise the performance, comfort and reliability of vehicles in general, Costa Rica’s climate and road conditions make these enhancements more prone to failure.

First, remember that Costa Rica measures distances in kilometers, not miles. The speed limit is not always posted on road signs. Often, speed-limit changes are indicated by painted numbers on the road itself.

It is not uncommon while driving in Costa Rica to be stopped by police. Be prepared by having your papers in order and obeying all of the laws. Unattended vehicles should be locked. Do not leave belongings unattended in a vehicle, locked or otherwise, as this may be an invitation to thieves.

Written by Rick Chalmers who is a licensed mechanic and emissions technician with more than 30 years of experience in automotive repair.