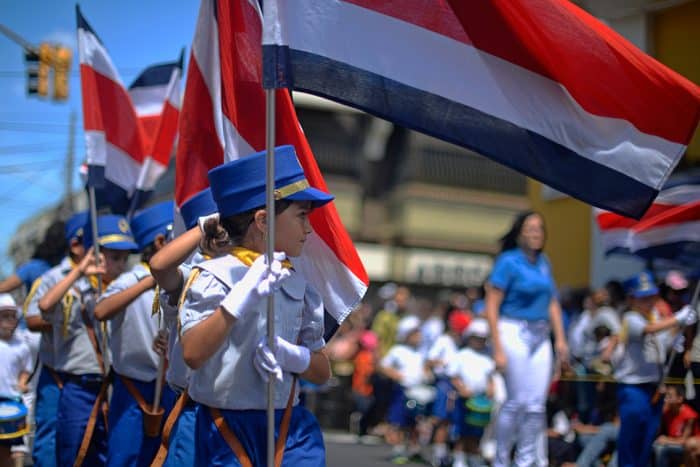 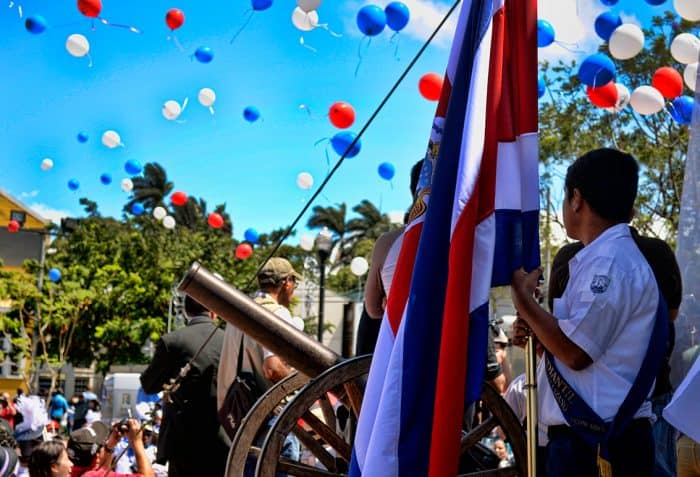 The statue of Juan Santamaría in the main park in Alajuela. (Lindsay Fendt/The Tico Times)

Costa Rica feted its first and most-loved national hero, Juan Santamaría, on Sunday, April 11. His name adorns the international airport in his native Alajuela, and schoolchildren across the country learn his story. But how much of that story is legit?

In the Battle of Rivas, Nicaragua, on April 11, 1856, the humble drummer boy set fire to a garrison lodging mercenary troops who sought to take control of Central America for the United States. His selfless act of bravery changed the course of the war and saved Costa Rica from becoming a slave depot.

As with most legends, people have debated the veracity of the details since shortly after the event took place. Costa Rica officially takes great pride in having made a working-class campesino its national hero rather than a military or political leader (Costa Rica claims to be the only Latin American country to have done so). However, some historians and sociologists say the original construction of the Juan Santamaría myth was, well, convenient.

In the second half of the 1800s, Costa Rican leaders were looking for something around which to form a national identity, and particularly something — or someone — that would engage the lower and middle classes and secure their loyalty.

That someone was Juan Santamaría.

The first time Juan Santamaría’s name was mentioned to a wide audience was in a speech and in pamphlets authored by Panamanian-Colombian politician José de Obaldía in 1864. (The two countries were several times united under the same flag.)

De Obaldía was exiled in Costa Rica at the time, and as part of the September 15 Independence Day activities that year, he delved into the details of the 1856 Battle of Rivas and wrote:

The reference to Gallego is unclear, though Juan Santamaría’s mother may have had the last name Gallegos.

Despite de Obaldía’s prescience, the nation’s political leaders basically forgot about Santamaría until 1885, according to Costa Rican historian David Díaz Arias. That’s the year Guatemalan dictator Justo Rufino Barrios decided to revive the idea of uniting the isthmus in a single Federal Republic of Central America — by force, if necessary.

Costa Rican leaders decided Juan Santamaría was the perfect figure around which to consolidate a national identity they hoped citizens would fight to defend.

Santamaría’s nickname was “El Erizo,” which could mean “burr” or “sea urchin” — he had curly hair, a testament to his partly African heritage.

But Costa Rican leaders at the time weren’t at all interested in emphasizing the country’s mixed heritage; they wanted the country to be seen as “white.”

Part of the politicos’ plan to elevate Juan Santamaría to hero status was to build a statue, the one that currently stands in Alajuela. They hired a French sculptor to craft it, and when it was unveiled, in 1891, Santamaría looked a lot like a French soldier.

Then, in 1897, Costa Rican painter Enrique Echandi Montero, threw a wrench in the hero’s identity. He painted a scene of Juan Santamaría’s legendary fire-setting deed, and in it he showed the hero as an exhausted-looking peasant with mulatto features.

The image was more of a “fallen hero,” along the lines of Jesus on the cross, than a determined warrior, wrote historian Guillermo Brenes Tencio.

The owner of the daily La República, Juan Vicente Quirós, did not like it. On Jan. 25, 1897, he wrote an article saying the painting was “worthy of the flames.”

He called the work “reproachable from an artistic point of view” and “a caricature that sacrilegiously makes fun of the hero and makes the entire country look sadly ridiculous.”

Look for a likeness of Juan Santamaría today and you’re likely to find one based on the French-made statue.

3) Juan Santamaría was actually the third person to try to set fire to the mercenaries’ garrison.

Santamaría was the guy who finished the job, not the one who started it. The first two to attempt to set fire to the garrison were a lieutenant from Cartago, who was wounded, and a Nicaraguan soldier, who died.

In a paper, Alejandra Murillo Goussen postulated that the first two wouldn’t have worked as national heroes: the lieutenant because he didn’t actually die for the cause, and the soldier because he wasn’t Costa Rican. That left Santamaría.

4) No one knows where Juan Santamaría is buried.

In 1981, then-Sandinista commander Daniel Ortega made a big show of meeting Costa Rican President Rodrigo Carazo Odio at the border to hand over the supposed remains of Juan Santamaría and other Costa Rican soldiers killed in the Battle of Rivas.

The story was that the remains of Juan Santamaría had been found buried underneath an atrium in Rivas in a box marked with the initials “JS,” historian Díaz Arias recounted in a 2014 article in La Nación.

Díaz suggests that politicians from both countries used the event to attempt to renew the symbolism of Juan versus foreign meddlers (ahem, the United States) and to turn Santamaría into a Central American hero, not just a Costa Rican one.

But some Costa Ricans were suspicious — both of the motives and of the contents of Santamaría’s supposed coffin.

They were right: several months later, a commission of Costa Rican scientists formed to evaluate the authenticity of the remains issued a report saying that the promised sacred bones weren’t even human.

5) Costa Rica’s reputation as the Switzerland of Central America may have started with Juan Santamaría.

You might think the whole Switzerland comparison is about Costa Rica’s political neutrality and relatively high standard of living. But here too, Santamaría might have a role.

In his scathing 1897 review of Enrique Echandi Montero’s painting of Santamaría, La República owner Quirós called the hero “the Guillermo Tell of our mountains.”

Guillermo (Wilhelm in German) Tell is a 14th century Swiss folk hero who was ordered by a tyrant to shoot an apple off his son’s head. Tell, as legend has it, drew his crossbow and split the apple without so much as brushing the boy.

The tyrant, Albrecht (or Hermann) Gessler, was impressed, but hauled Tell off anyway to spend his life in a dungeon. On the way, Tell made a daring escape, assissinated Gessler and went on to help lead a rebellion that eventually resulted in Switzerland.