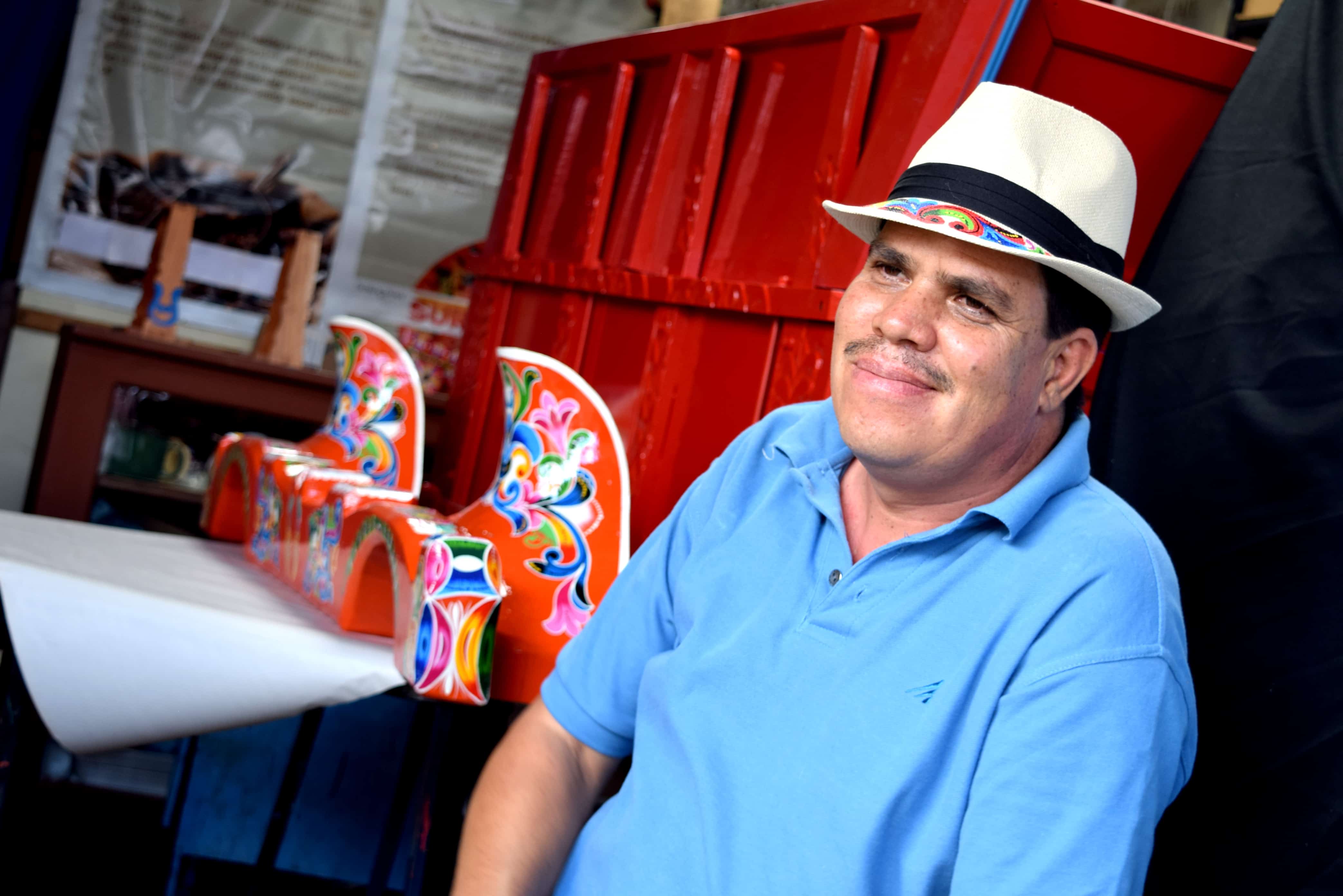 Luis Madrigal depicts Costa Rican identity through the use of bright colors and shapes on the oxcarts he paints. (Amanda Zúñiga/TheTicoTimes)

Luis Madrigal, 48, is a Costa Rican painter from the town of Sarchí in Alajuela. His canvas: the country’s iconic oxcarts.

Madrigal graduated in 1986 from the Colegio Técnico Francisco J. Orlich, after deciding to master the technique of painting oxcarts during the last two years school.

He worked at the Fábrica Joaquín Chaverri in Sarchí and ever since has dedicated his life to painting oxcarts, traditional costumes, yokes, scenography and more products through the use of bright colors.

In 2015, he participated in two international fairs with the Costa Rican Tourism Institute (ICT) in Berlin and Madrid. He is now working with the Culture Ministry in order to protect the oxcart tradition.

On a sunny, beautiful morning in Sarchí, The Tico Times sat down and spoke with Madrigal about his life and work. Excerpts follow.

Which is your process for painting an oxcart?

We start by using a base color. For example, this one that’s behind me is an oxcart that’s already prepared to be decorated, with a red base. There are also orange ones.

Once the base is ready, we draw the outline. Then we start giving the oxcart color: the base colors, the plane colors and then the shading of each color. Last comes the outlining of the details… Each oxcart is an original and unique piece.

There are many designs. A star design is traditional for the wheels, but another design has developed over time, which is the saw-shape design. You can also combine these. Then you can play with the colochos (curlicues) on the rest of the oxcart.

These elements are taken from nature: leaves, stems, flowers, pistils. Even the dots make allusion to the seeds. It’s a close relationship between the campesino and his agricultural activity, so in the end, the oxcart’s design represents the campesino’s activity and environment back then. The combination of flowers and bright colors is a characteristic of Madrigal's work. Amanda Zúñiga/The Tico Times

How do you prepare the color palette, and how would you define Costa Rica in color?

In Sarchí, the painter has always worried about the details so that the oxcart looks its best. The paintbrush choice, the paint choice, the color tones… the sarchiseños have been taught to pay attention to all of those details.

If you take a look at the oxcart, you notice that the colors are very bright and strong, vivid and striking. What we look for is for [the oxcart] to be appreciated at a long distance. We want every detail to be seen separately.

Also, when you look at a painted oxcart, especially here in Sarchí, you’ll notice that what we really express is the Costa Rican true essence. Ticos, by their true nature, are warm, cheerful, and jovial. That’s what we express with an oxcart.

How would I define Costa Rica in colors? First, it’s a country that’s in the tropics. It’s very interesting. When I was in [Berlin and Madrid], I was able to understand that the weather has conditioned our way of being. We’re super warm.

You take a look at the oxcart and you see color everywhere. You see details everywhere and that’s how the Tico is. It’s a color palette with strong contrasts and super vivid colors. Costa Rica is like that: very cheerful, very warm, very yellow, super blue and super red. It’s the color in its maximum expression.

How is the oxcart a representation of Costa Rican values?

Costa Rica developed as a country thanks to its coffee and the oxcarts. The first coffee exportation took place in 1820, and since that point on Costa Rica began changing.

The boyeros (oxcart drivers) made oxen caravans that went from San José to Puntarenas to carry the coffee and bring back European merchandise. It was the source of transportation back then. A boyero took eight days to get to Puntarenas and eight days to get back to San José because the oxen had the capacity to only travel a distance of 20 to 22 kilometers per day.

After those 20 or 22 kilometers they gathered at a certain place to stay for the night, get the oxcarts in place and feed the oxen. At those specific points, economic activity was generated, and those points became towns. If you go from San José to Puntarenas you’ll notice that the distance between towns such as Orotina and San Mateo is about 20 or 22 kilometers because of that.

Imagine all of the things that those boyeros had to have in order to survive that trip. Tenacity is the first thing. They were very brave people. Those people went through cold, heat, rain… it was something unbelievable. They had to survive that. That was the Tico from those times: brave, honest and hard-working. We try to represent all those values with our art. Besides painting oxcarts and traditional costumes, what other things do you make?

Sometimes I work for schools, scenography and different activities. I participate in local and national fairs, selling chonetes (hand-painted traditional hats) because it’s the concept of the oxcart decoration, but smaller. Besides that, the chonete is very representative of us. At the fairs I paint the hats and sometimes I personalize them.

People love it! We also give workshops so that people can paint. I make all sorts of things, and it’s very hard to answer when people ask me what I do. People are hiring me more to do demonstrations, sell products or participate in workshops. It’s very interesting because I’ve diversified the services I offer. It transcends the idea of just painting.

You’ve also got to get involved in things. When I go to meetings about Costa Rican heritage in San José, it’s nice to see neighbors from Sarchí such as Lidilia Arias Chaverri, who works at the National Museum and wrote a book about the Sarchí painting.

There’s also Giselle Chang, who was the one who did the research so that UNESCO would declare the boyeo (the tradition of oxcart work) and oxcarts as part of World Heritage. Imagine the type of knowledge you acquire from these meetings.

It has been a slow process, but we have advanced a lot. A Safeguard Committee will soon be created in order to safeguard the boyeo and the oxcart. What does it feel like to be painting something that is so representative of our country?

Extreme happiness. When I’m painting, I’m doing what I love. Painting an oxcart can be an exhausting and tedious process because there are a lot of pieces; it’s many hours and repetitive, in the sense that each wheel must be painted in the same manner.

But for those of us who love this, the simple sight of a finished piece and the expression on the customer’s face is everything. In the end, the money I get is symbolic. Watching the other person’s satisfaction is great. Their expression brightens up. The same thing happens to me because it’s the result of what I did.

Besides that, it’s not only about painting. Now that UNESCO has declared this activity as part of World Heritage, I’ve got that responsibility not only of maintaining the tradition, but also of passing it on to the new generations.

I’ve realized what this means for us. Behind a painted oxcart or yoke, there’s the series of values I mentioned before that make the Tico who he or she is.

The new generations must understand this and that their roots made this country big. The idea that Costa Rica is the happiest country is true. We must not lose these values.

This article first appeared in 2016