Stronger together: A feminist’s view on the 8M March in Costa Rica 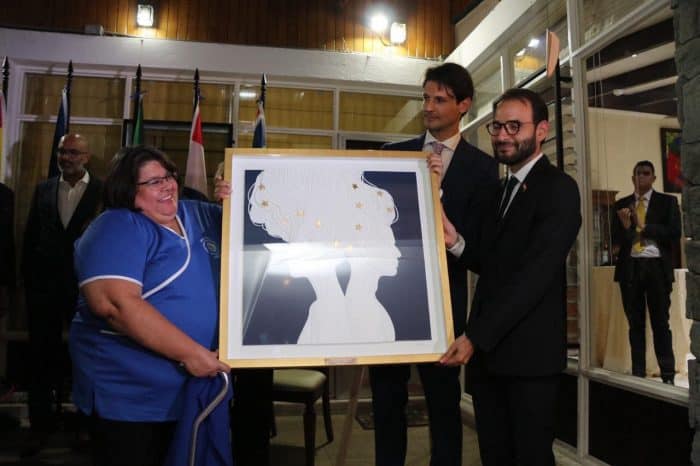 A portrait of Francisca ‘Pancha’ Carrasco. Born in 1816 in Taras de Cartago, she broke the rules for girls by learning to read, write and ride a horse. In public demonstrations against dictator Francisco Morazán in the 1840s Pancha led a mounted female brigade through the streets urging the public to oust this intruder from Honduras. ()

In honor of International Women’s Day, we’re taking a look at just a few of the many remarkable women who have shaped the Costa Rica we know and love today.

We might not have a specific woman to name here, but no look back at Costa Rican women leaders would be complete without mentioning that in the days before the Spanish arrived in Costa Rica, women here were highly involved in social and political life. Indigenous women were chiefs and among the Brunka people, women were warriors and leaders. In the Nicoya region, Chorotega women were the economists, in charge of production and marketing of agricultural products and handicrafts.

Costa Rica may not have an army today, but Francisca ‘Pancha’ Carrasco gained fame as a warrior. Born in 1816 in Taras de Cartago, she broke the rules for girls by learning to read, write and ride a horse.  In public demonstrations against dictator Francisco Morazán in the 1840s Pancha led a mounted female brigade through the streets urging the public to oust this intruder from Honduras.

In 1856 when president Juan Rafael Mora Porras issued a call for an army to rout the invasion of William Walker and his Filibuster army, Pancha joined her husband Gil Zuñiga on the long march to Guanacaste and later up the coast to Rivas, Nicaragua. Although she tended to the women’s work of cooking, mending and caring for the sick, at the battle of Rivas she picked up a rifle; her shooting skill help the Ticos to recover a cannon, an important step toward preserving Costa Rica’s independence. Honored by the government, her portrait hangs in the Alajuela museum dedicated to Juan Santamaría and the Campaign of 1856.

Emilia Solorzano Alfaro would be remembered merely as the wife of strongman Tomás Guardia and First Lady from 1870 to 1882, except for one extraordinary achievement that brought Costa Rica into the ranks of more progressive countries of the world. Her travels through Europe inspired her to work for education, especially for girls, and she was the founder of the first high school for girls in 1878 – but her most important contribution the use of her influence to bring bout the end of the death penalty in 1871. She was honored by the government as a Benemérita de la Patria for her role.

Carmen Lyra’s book Cuentos de Mi Tía Panchita, or Tales of My Aunt Pancha, is beloved by children and grownups alike; the stories are part of Costa Rican tradition.  Doña Carmen was born Maria Isabel Carvajal in 1887 in San José, and studied to be a teacher. While traveling in Europe she studied the early education programs used there and in Costa Rica introduced the Montessori method of teaching young children.

Writing became her passion and several of her books are widely read today.“En una Silla de Ruedas,” or In a Wheel Chair, is part of the Costa Rican high-school curriculum. In the 1930s she joined the Communist Party and organized women workers and teachers into unions. In 1948, along with other Communist leaders, she was exiled to Mexico and died there a year later. She was later honored by the government of Costa Rica as a Benemérita de la Cultura.

Sor María Romero was born in Nicaragua in 1902 and died in 1977 but she is known and loved throughout Costa Rica and soon may be Costa Rica’s first saint.  She came to Costa Rica in 1931 as a Salesian nun of the Order of Don Bosco and worked tirelessly to help the poor and the oppressed, founding homes for the abandoned and homeless. She urged education for all, but especially for girls; she set up schools and training for working girls, as well as a home for girls. Her home and convent, Casa Maria Auxiliadora, on Calle 32, Av. 4 in San José, carries on her work, providing food, shelter, help, heath care and legal aid to those in need, including a shelter for abused women and children. Alumni of the Maria Auxiliadora high school across the street remember Sor María as an inspiring and caring teacher.

Sor María died in 1977 and in 2002 was beatified by Pope John Paul II, a step up the ladder to sainthood.

Emma Gamboa is a name know to all: her picture was on the ¢10,000 bill until recently, making her the first Latin American woman to be honored that way.  Born in San Ramón in 1901, she studied to be a teacher at the old Normal School in Heredia and at Ohio State University in the United States. She promoted education for everyone and her textbook Paco y Lola, using Costa Rican subjects and themes, was the standard reading tool in the schools. As the first education professor at the University of Costa Rica, she established the laboratory school for practice teaching. Costa Rican women’s sports have had their share of heroines, such as swimmer Claudia Poll and boxing phenomenon Hanna Gabriels. The world-champion boxer was born in 1983 to a sporting family. Her father Leslie was both a boxer and soccer player and a brother also played in the national soccer league. Hannah chose boxing and made a name for herself representing Costa Rica in international boxing. She won the middle weight world boxing championship in 2009. In 2013 she lost the championship because of a health problem but came back to win it again in 2014.

Known for her energetic personality and her interest in helping other, Gabriels is a popular and well-known figure. Costa Rican President Laura Chinchilla addresses lawmakers and dignitaries at the Legislative Assembly in San José, on May 1, 2014, during her last major speech before leaving office on May 8. Chinchilla spoke for almost three hours about the achievements of her administration. Alberto Font/The Tico Times

Laura Chinchilla Miranda made it to the top in politics at a time when women presidents are still considered a rarity. She was only the eighth woman to be president in Latin America. Born in 1959, she grew up in a political home: her father, Rafael Angel Chinchilla, was controller in the 1970s and 80s.  Active in the National Liberation Party she held posts as Minister of Justice and Vice President before being elected president in 2010. Her administration advanced anti-crime programs and free-trade agreements, as well as one of her top-priority projects, an effort to create quality daycare centers for the children of working mothers.

The list is far from complete as there are many more women who have contributed to Costa Rica’s history. Who would you choose to add?

This piece was originally published on March 8, 2015.