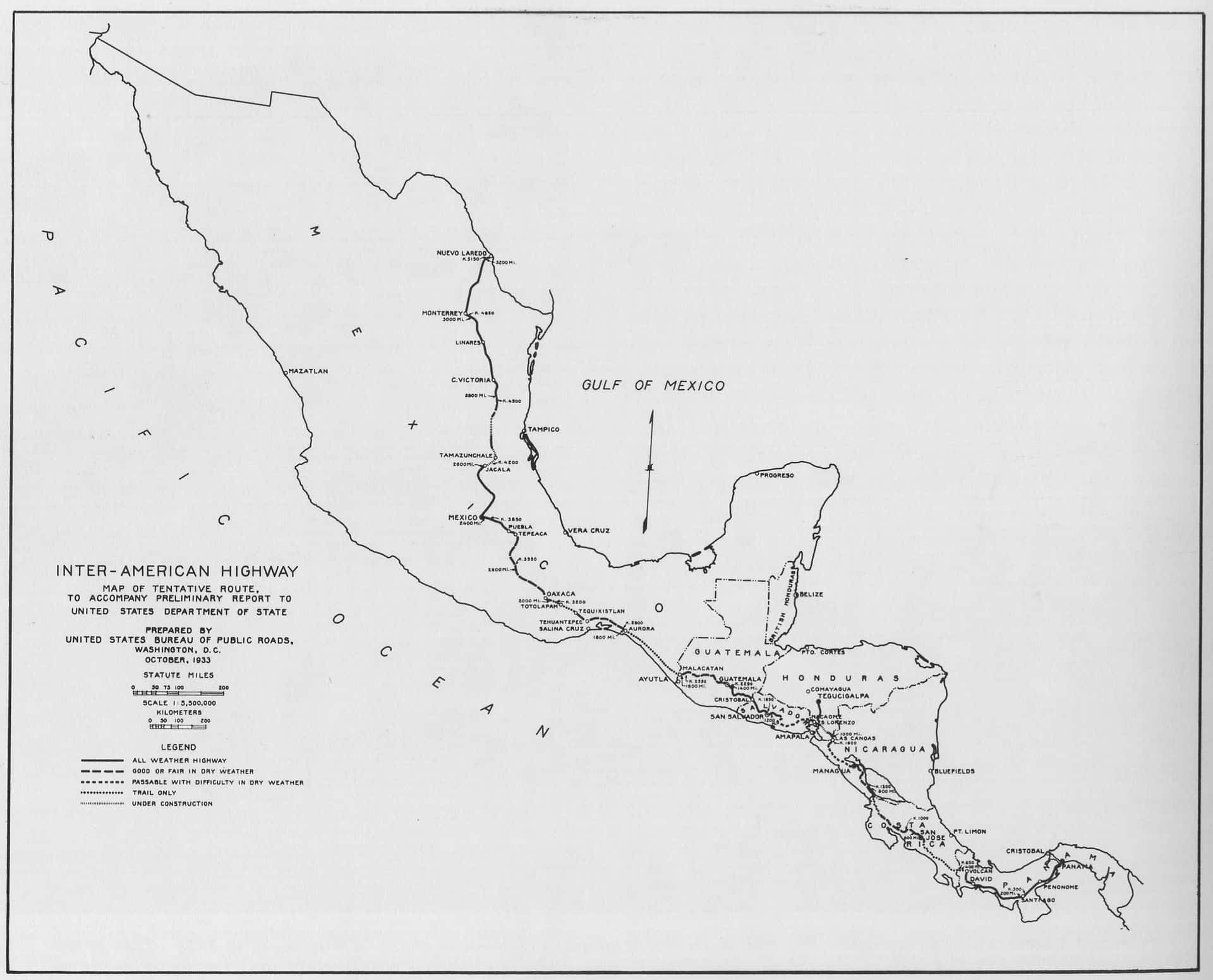 1933 map of the Inter-American Highway. (Photo: US government (Public Domain))

For Throwback Thursday, we’re republishing a Tico Times story that first ran in 2005. The author, Max Schwartz, shares his memories of working on the Inter-American Highway in Costa Rica.

Following the bombing of the U.S. naval base in Pearl Harbor on Dec. 7, 1941, the United States entered World War II. Concerned about the vulnerability of the Panama Canal to enemy submarines, the United States decided that an overland route to the canal was imperative.

The work was assigned to the Los Angeles office of the U.S. Corps of Engineers, where, at age 19, I worked as a draftsman. I signed up as a surveyor-aide on the project and was sent to the base office in San José, Costa Rica. Conditions were challenging back then, with malaria, amoebic dysentery and skin infections common among surveyors.

Shortly after my arrival, I was reassigned to a field survey party near Liberia, capital of the northwestern province of Guanacaste, to replace a man down with malaria.

When I attempted to drive north by army jeep, my tires were shredded by the deep-rutted dirt roads used by oxcarts, and I was forced to fly on an ancient TACA airplane.

The plane bounced across the La Sabana soccer field – then, San José’s main airfield – and rose into the clouds. Sitting in the copilot’s seat, I noted that the pilot flew by dead reckoning, rarely using the sparse instruments or radio. After a long, bumpy flight, the pilot suddenly banked and dove through the clouds toward a grass-covered field outside of Liberia.

Shouting over the engine noise, I asked him where the airport was. He laughed, and explained that in Costa Rica, any clearing in the jungle wide enough for a landing was an airport.

The plane bounced to a jarring stop. Trying to hold down the contents of my stomach, I climbed out of the cabin and was engulfed by the intense heat and humidity. This is like a Turkish bath, I thought, as I was greeted by the party chief, a 50-year-old, leathery surveyor. Soon we were riding horses to the survey campsite several miles from the “airfield.”

My job was to help blaze a trail and mark a preliminary route for the highway. This was to be followed by a topographic survey of a 100-foot-wide strip to Cañas, southeast of Liberia, where another survey party was working.

We surveyed over mountains, through valleys and across rivers without maps or radio, only by compass. Each morning, we rode horses from the campsite to the survey line with a pair of saddlebags suspended behind our saddles containing our personal belongings. Packhorses carried our surveying instruments and other heavy equipment.

We set up tarps to shelter the instruments against the sun and rain. Though we were supplied with rubber raincoats, I refused to wear mine, as I got just as wet sweating as I did from the rain. After each rainfall, the sun and heat evaporated the moisture in the soggy ground, forming a dense fog.

Survey work could not start until the air cleared enough to make sighting through telescopes possible.

The jungle’s damp air fouled the crosshairs in our instruments and rotted our clothing. Books and boots fell apart when bindings melted, and threads rotted in the heat and humidity. Everything was so wet it either rotted from fungus or dissolved from moisture. The wood survey stakes we used grew branches after they were set in the ground.

Using sharp machetes, the Costa Rican workers cleared a path ahead of the survey party. The chief set his transit over each point of intersection, where the line changed direction. He shouted the angular change to me, which I recorded in my field book. The level party followed, measuring the elevations of the ground within a 50-foot-wide swath on both sides of the line, which I also recorded.

When we were too far from Liberia to make the trip on horseback, we moved our base camp and set up army-style tents in the jungle. We slept on canvas cots a few inches above wet ground that crawled with scorpions and snakes. Each night, I used a net to guard against the malaria-carrying anopheles mosquitoes.

The fieldwork for the section took about five months. When it was finally completed, I returned to San José with my field books. I helped the highway engineers prepare the final design of the roadway, and drew topographic maps for the designer to plot the best route for a military roadway with very steep grades, sharp turns and gravel paving.

The roadway crossed watercourses by wooden culverts and bridges. Although contractors began construction, the threat to the Panama Canal had subsided by mid-1943, as the U.S. Navy and continuous B24 bomber flights over the Atlantic Ocean and the Caribbean had reduced the German submarine menace to acceptable conditions.

Consequently, the U.S. Corps of Engineers phased out the military road effort and turned their work over to the U.S. Public Roads Administration and the Costa Rican Ministry of Public Works and Transport, which continued design and construction of the Inter-American Highway for civilian traffic in the country.

The highway was completed around 1960, extending from the Nicaraguan border in the north all theway to Panama in the south.

Max Schwartz returned to the United States in 1943 and enlisted in the U.S. Army Corps of Engineers. He worked on military roads and bridges in Europe from 1943-45 with the 1306 Engineers of Patton’s U.S. Third Army.

After the war, he continued in his profession as a civil engineer for 40 years.