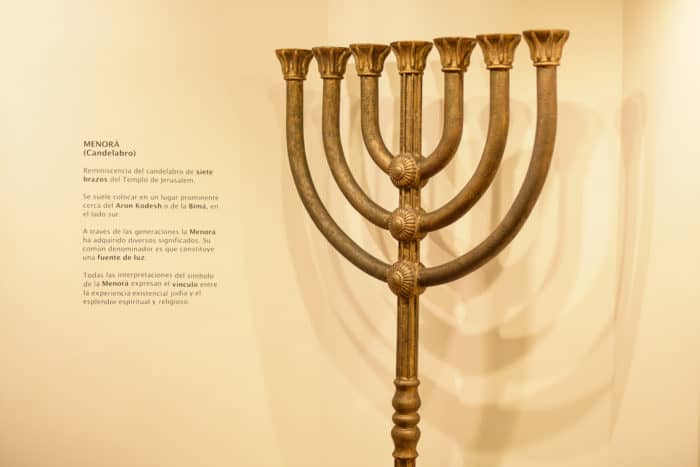 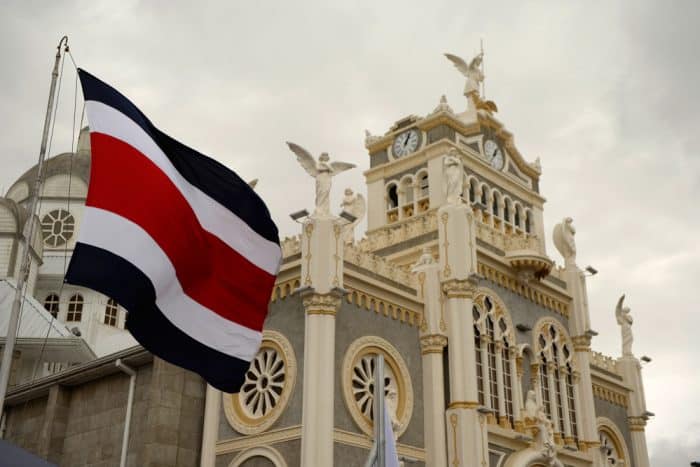 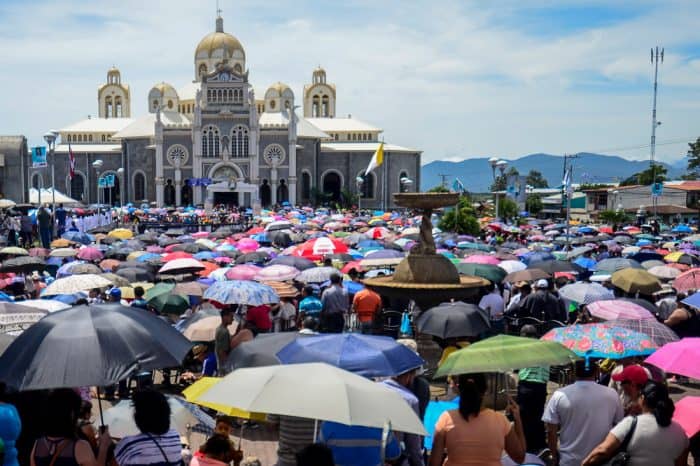 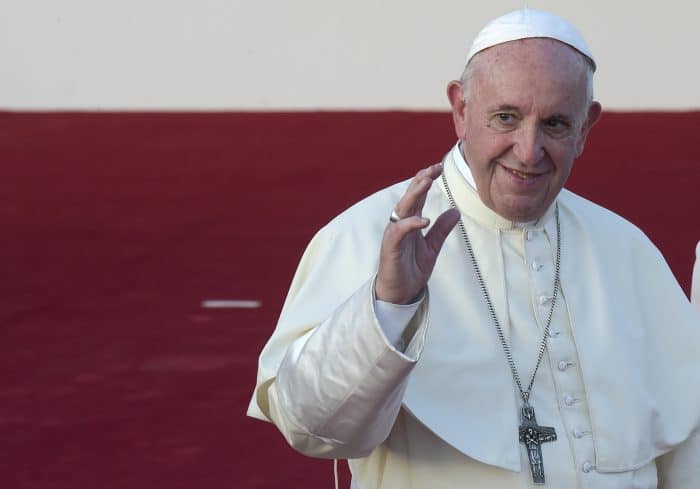 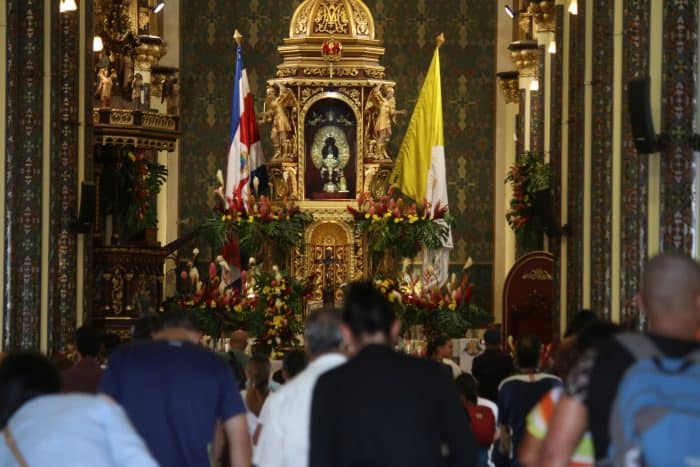 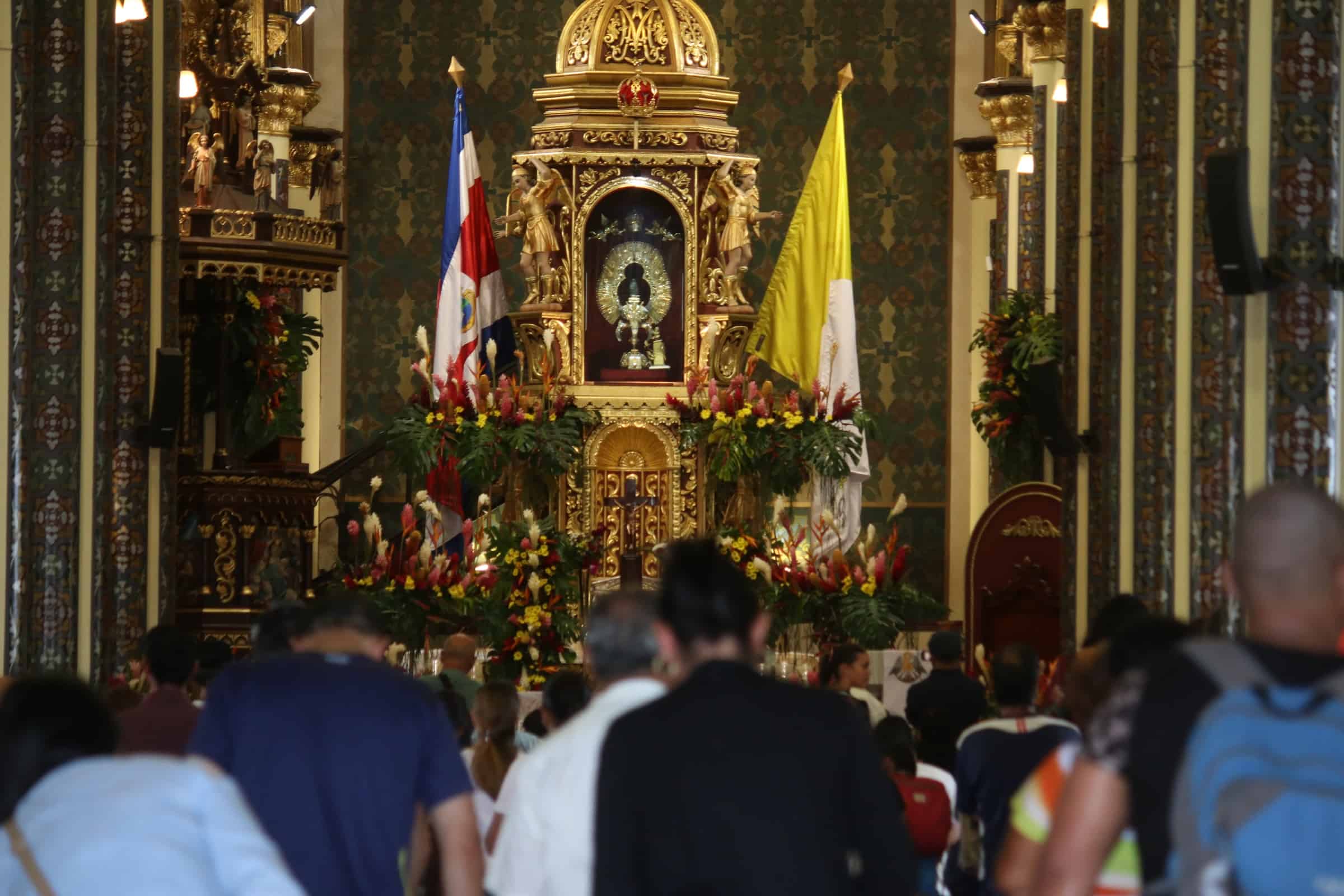 Pilgrims at the Basilica of Our Lady of the Angels in Cartago, Costa Rica on Aug. 1, 2018. (Photo by Jonathan Jiménez)

Many walk the 22-kilometer distance from San José to the church, and some choose to complete the last few hundred meters on their knees. Pilgrims, or romeros, come from all over Central America. A few romeros have already begun the journey.

The history of the pilgrimage begins nearly 400 years ago.

On the morning of Aug. 2, 1635, a young indigenous girl named Juana Pereira went to collect firewood as she did every morning. She was walking barefoot through the brush near a spring when she was surprised by a figure of a woman holding a child in her arms. The figure was on top of a rock, and the young girl brought it back to her house and stored it in a trunk.

The next morning, Juana went out to get wood again, and when she went by the spring, she saw the same figure on the same rock. She took it home to put it with the one she had found the day before. But when she opened the trunk, it was empty.

The same thing happened the next two days.

Then, on the fourth day, Juana brought the figure to the Parish Priest Alonso de Sandoval, who decided to keep it in the church’s sanctuary. When he went to check on it the following day, the figure was gone.

Juana found it near the spring again the following day.

That’s when they realized that figure was staying there, in an area called La Puebla de los Pardos, or as it’s known today, Los Ángeles de Cartago. That’s where they built the church and since then, the figure has been called by different names: La Virgen Morena, La Virgen de los Pardos, La Reina de Cartago and Our Lady of the Angels. While the name has changed, the legend has stayed the same for hundreds of years. In 1926 the image was canonically crowned Our Lady of the Angels.

Some Catholics give the Virgin Mary the title of co-redemptrix for her role in helping redeem mankind. They believe she helps advocate for them and deliver their prayers to God.

That’s why Costa Rican Catholics display gratitude, respect and devotion to the Virgen de los Ángeles with a pilgrimage to the Basilica of Our Lady of the Angels in Cartago. The pilgrimage is known as the “Romería.” Pilgrims often bring an item that represents what they’re going to pray for and leave it in the basilica’s museum. The original stone where the figure — also known as “La Negrita” — was found is also in the museum. The rock where legend says the image was originally found. Photo by Jonathan Jiménez

Since the middle ages, Catholics have completed pilgrimages to places they consider holy, like the Way of Saint James, which is a pilgrimage to the shrine of the apostle Saint James the Great in the cathedral of Santiago de Compostela in Galicia, Spain.

In Costa Rica, people from every corner of the country make the pilgrimage to Cartago. People in San Jose have to walk about 25 kilometers to the basilica, while people from Pérez Zeledón make a 130-kilometer trip.

The spring that Juana walked by barefoot nearly 400 years ago is now a basin for holy water where pilgrims fill up water bottles shaped like the Virgin Mary. A pilgrim drinking water from a basin in the Basilica of Our Lady of Angels. Photo by Jonathan Jiménez

A version of this story was first published in 2018.