Snakes in Costa Rica: A hidden enemy – the terciopelo 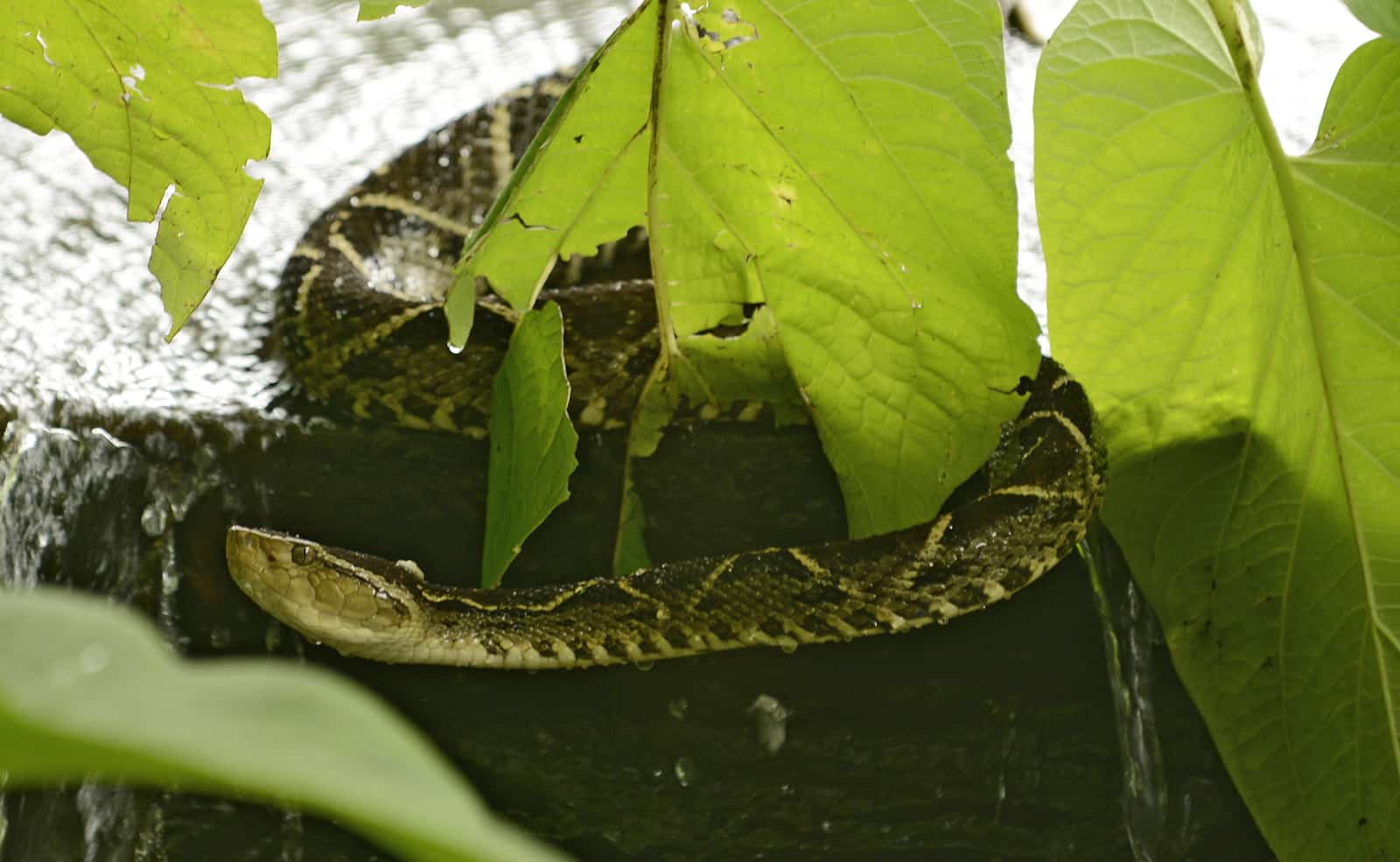 A fer-de-lance (terciopelo) crawls out of a bush in La Fortuna. (Lindsay Fendt/The Tico Times)

J began to black out from the pain and loss of blood about an hour after the terciopelo bit him on his right foot. He was a just a boy (name withheld by request) walking around the family’s farm in flip-flops when the accident happened.

His father drove him directly to the public hospital in Puriscal, eschewing the ambulance, saving time.

A medical intern at that hospital started administering antivenom and J’s heart was pounding as if it wanted to escape his chest. Before he fainted, J saw that his leg was swelling like a balloon and parts were turning black. Then he suffered a heart attack.

J woke up in a bed at the San Juan de Dios hospital in San Jose. He had been transported there after doctors determined he needed advanced treatment beyond the scope of their facility. It was a rough ride, but luckily not slowed by natural disaster or traffic.

A nurse at the new hospital introduced herself and pulled off a loose mountain of gauze, exposing a wide-open canal in his leg. Surgeons had sliced J’s leg down to the bone, running from heel to knee, displaying red meat where it wasn’t black. He was heavily sedated and unaware of the dead, rotted flesh she scraped off with a brush.

“I’ll be doing this until your body stops necrotizing,” the nurse said. “We hope to save your leg.”

J was lucky. His leg responded to treatment, and two months later the hole was patched with a graft from his buttocks. But for those deep in the country, the current protocol is planned failure.

“After a snake bite, you have a two-hour window of opportunity,” Dr. Abraham Chavarría of the Puriscal public hospital explained during an interview.

Normally, the 911 call of an anxious resident from an obscure town is routed to operators in San José. Then the victim’s information and location is transferred to the proper Red Cross station.

More precious time is wasted because the ambulance arrives to the victim without antivenom or a doctor on board to begin treatment.

The driver transports the victim to a public clinic (EBAIS) or a provincial public hospital (CAIS). An hour or two may have already passed since the snakebite. That’s an hour or two for the poison to circulate in the bloodstream destroying everything it touches.

The victim’s “two hours of opportunity” are slipping away. Though efforts are made to stabilize the victim at the local medical facility, some victims arrive in such delicate condition that they’re transferred immediately through the mountains to San Juan de Dios in San José. Landslides, traffic-slowing accidents, or road maintenance leading to gridlock on Highway 27 into the city can prove fatal.

I’ve interviewed caring professionals who complain that the system doesn’t work. A Red Cross driver of thirty years, Juan Elizondo, has had bite victims die in the ambulance.

The first option for most bite victims is their local clinic. But the EBAIS clinics are closed more hours than they’re open. They also shut down for nine consecutive days during Holy Week. When closed, victims are driven past life-saving medicine.

My doctor at the EBAIS, Dra. Ana, impatient with my interest in snakes and the numbers of bottles of anti-venom in the refrigerator, wondered why I “worry about something that hasn’t happened yet.”

It’s no surprise that I’ve seen many venomous snakes in the forest. But then I almost stepped on a 2-meter terciopelo in my backyard. It was coiled, with its head knee-high in ambush position.

Following this unexpected encounter on my home turf, I decided to research the species and interview local residents and medical professionals to counter my fear with knowledge.

I began my study by requesting public snakebite records, both nationally and locally.

Philippe Mora, Legal Counsel of the Puriscal CAIS, drafted a request to Yessenia Madrigal Mora, Chief of External Consultations, for data regarding snakebite admissions since 2015, when they began collecting data digitally. I asked for an account of amputations and deaths. These patients would have arrived from my Central Pacific zone; an area scientists constrain to be densely populated by terciopelos.

I received a half page document listing one bite victim in 2015, eight in 2016 and seventeen in 2017, treated at either the CAIS or one of sixteen local EBAIS. Treatment outcomes were not indicated.

By then, having interviewed close to one hundred residents in the area, each with another tale of snake bite horror, so few cases seemed unlikely. Red Cross volunteers spoke of transporting victims weekly.

The head of the local Red Cross, Gaudi, offered to share local and national data, but when I returned for it, she said there was none.

This seems confirmed on the website of the world-class Instituto Clodomiro Picado/UCR, “… an undetermined number of people are left with permanent damage.”

The records from the country’s public health system, the Costa Rican Security System (CCSS, or Caja), reveal that this health issue is concentrated in a few rural regions, not in the metropolitan area. The terciopelo is responsible for the bulk of the cases; the Caribbean canton of Limón has the highest number of cases, while Turrubares, a tropical canton downhill from the mountain town of Puriscal, is second.

Clearly then, the resources to best treat snake bites should be concentrated where people are bitten, not in urban San José at the Hospital San Juan de Dios.

For many residents and workers in rural Costa Rica, their home is a paradise contaminated by “mobile landmines.”

I especially fear for my neighbors who live among farm animals that require feed, the feed attracts rodents, the rodents attract these particular snakes.

I’ve asked many farmers about this. Do they realize their danger?

“Yes, of course, but what can we do? God willing.”

Most snakebite victims are not famous and fashionable. They’re mostly farmers living with more horses than cars. Their boots are caked with mud and cow pies. Some are undocumented.

I believe that Costa Rica, a world leader in venomous snake research and the production and sale of antivenom, must better focus resources to help citizens in high-risk areas. By law, they have a constitutional right to equal access of healthcare. The time from bite to the first drop of antivenom needs to be minimized.

I submit a better way to help people. It is economically sound, especially compared with the lifelong medical costs paid by the CCSS to any victim:

This could prove to be a winning strategy for Costa Rica’s progressive image, its citizens, residents and tourists, and a model for the developing world.

Kevin Kichinka chose to live in a high, wild place, reforesting the land while white rivers of clouds stream through the valleys below. He watches the silent night lightning caress the mountaintops with a dozen fingers. Kichinka works to maintain the natural beauty of Costa Rica.