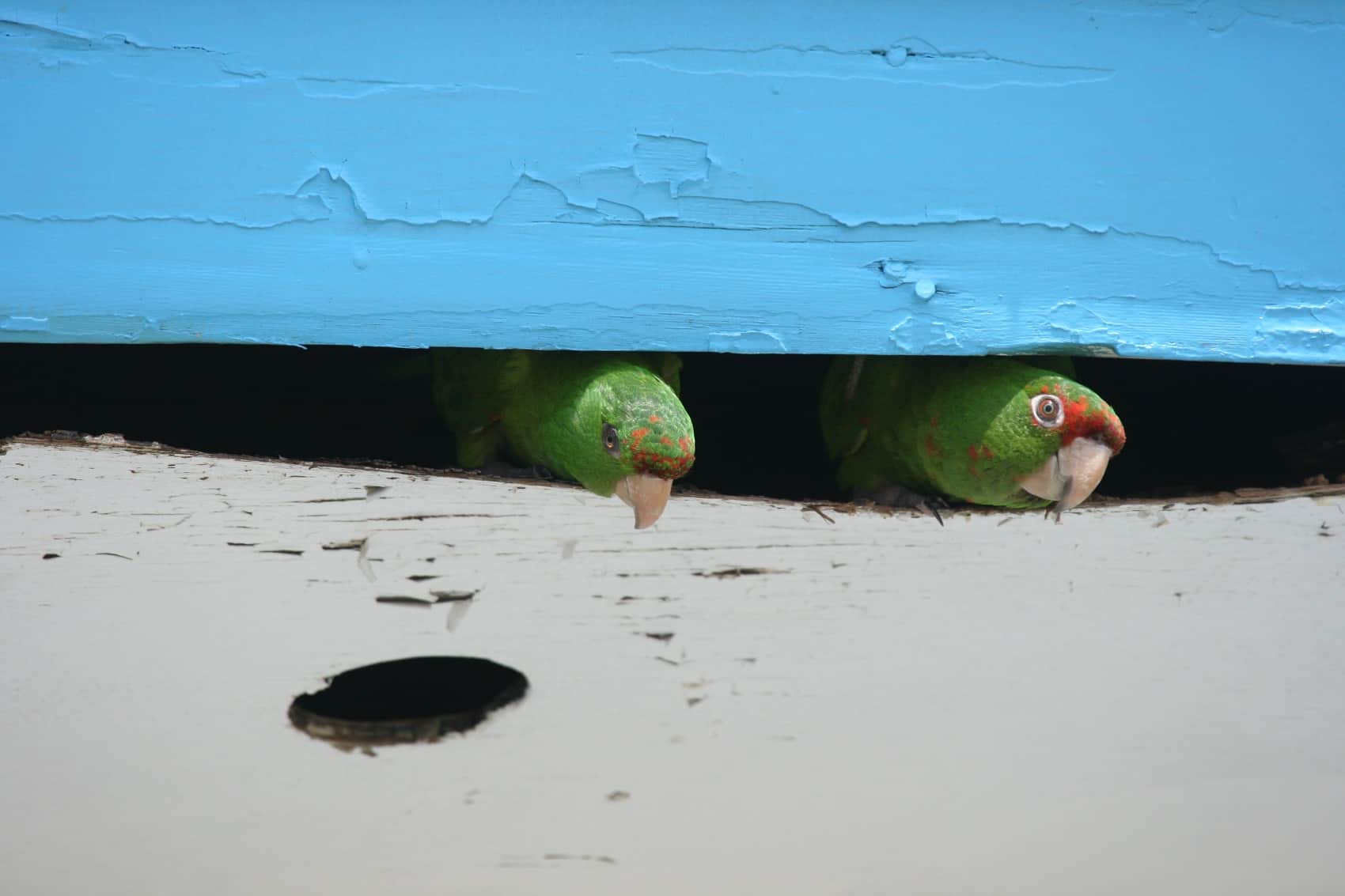 Crimson-fronted Parakeets are a common sight (and sound) in San José. ((Courtesy of Jonker/Innemee Cityparrot.org))

We continue this month with a look at five more birds that are common in the trees, telephone wires, rooftops, and sidewalks of San José: Crimson-fronted Parakeets on the UCR campus in San Pedro. In Costa Rica, this species can be identified by its long, pointed tail and a variable amount of red on the forehead. (Courtesy of Jorge Solís Campos)

A few parrot species can be found in San José, but the Crimson-fronted Parakeet is by far the most common. These birds are an energetic bunch, flocking in groups to building eaves and trees with an incessant chatter that can be deafening if you find yourself next to a tree full of them. Here’s the sound of a flock flying overhead (some taxonomic authorities refer to this species as Finsch’s Parakeet/Aratinga finschi):

Although this species is abundant in San José, it’s actually quite special in that it’s a regional endemic: its entire range extends only from Nicaragua to western Panama. It belongs to the Psittacidae family, along with parrots and macaws. The Rufous-collared Sparrow can be distinguished from similar birds by its gray-and-black crested head. (Via Rodolfo Walker/Flickr)

You can’t walk very far down a sidewalk in San José without running into a pair of Rufous-collared Sparrows hopping around on the ground or flitting between bushes. Like most members of its family, this species has a conical bill ideal for cracking seeds and grains, hence its local name Comemaíz. It belongs to the Emberizidae family, along with finches, buntings, and other New World sparrows. Its vocalizations include a whistled song: The Tropical Kingbird can be distinguished from similar birds in Costa Rica by its notched tail. (Via James Diedrick/Flickr)

Like the Great Kiskadee we described in Part I, the Tropical Kingbird belongs to Tyrannidae, the tyrant flycatcher family, and is one of about a dozen birds known as pecho amarillo in Costa Rica. Flycatchers are known for, well, fly catching. Like many of its relatives, the Tropical Kingbird frequently hunts flying insects by making quick flights known as “sallies” and returning to the same perch, as this bird is doing: The Rufous-tailed Hummingbird is distinguished from other Costa Rica hummers by its combination of a rufous (reddish-brown) tail and green breast. (Courtesy of Raul A. Vega Vega)

Costa Rica is home to about 50 of the roughly 340 known hummingbird species, and this one is the most common in the gardens and open areas of the Central Valley. The Rufous-tailed Hummingbird is highly aggressive and territorial at bunches of flowers, readily chasing off other hummers. They have a variety of vocalizations, including this song:

Hummingbirds make up the Trochilidae family, and occur only in the Americas. As one might expect from the size of their feet, they can’t really walk, but can shuffle sideways along a perch. The White-winged Dove can be told apart from similar doves and pigeons by its white wing stripe, which is usually visible on the folded wing. (Via Laura Gooch/Flickr)

This species is about the same size as the common city pigeon (Rock Pigeon) and much larger than the Inca Dove. Like many other doves and pigeons – which collectively make up the Columbidae family – the White-winged Dove forages for seeds, grain and grit largely by walking (not hopping) on the ground, its head bobbing. Its throaty call is often transliterated as ‘who-cooks-for-you’: