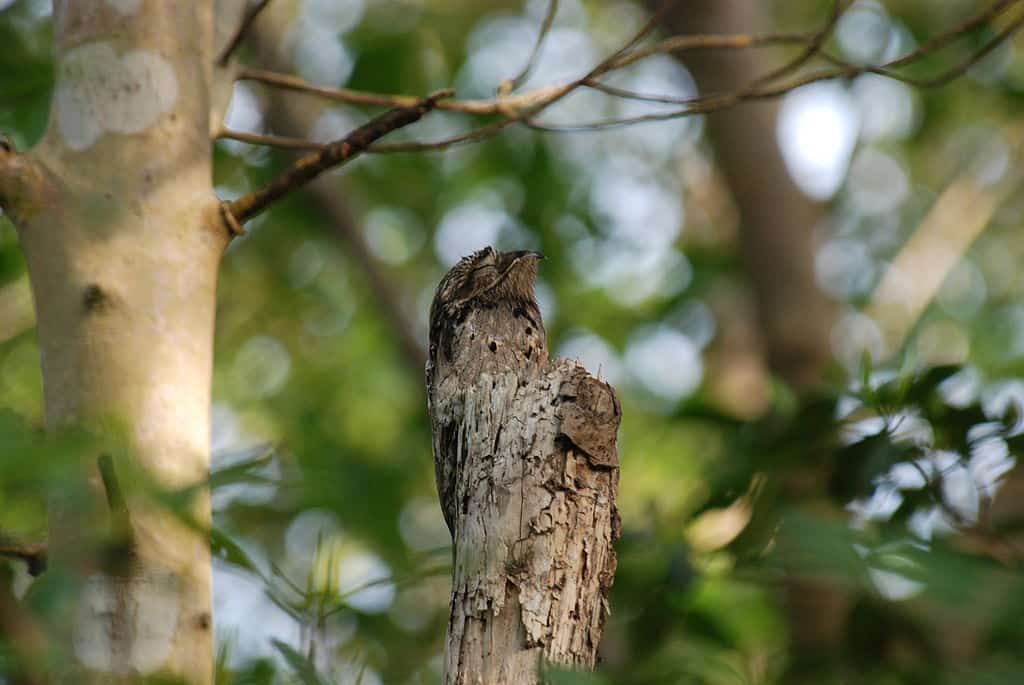 Costa Rica's three species of potoos use their cryptic-colored feathers and a "freeze" posture to blend in with tree branches and stumps. ((Courtesy of Wikimedia Commons))

The jungle can be a scary place, and even for some of the fiercest of Costa Rica’s creatures, sometimes the best defense is just to hide. Fortunately, these six animals have figured out a way to hide out in plain sight. Potoos will stretch out their necks and freeze when predators are near so that they blend into the stump they are perched on. (Courtesy of Flickr Creative Commons)

A dead, bare tree stump might not seem like the best place to seek out wildlife, but if you are trying to spot one of Costa Rica’s three species of potoos, that’s exactly where you should look. As nocturnal insectivores, potoos rarely fly during the day. Instead, they perch on top of thin tree stumps. With their dark, speckled plumage, the potoos blend in with the dead trees. When they detect danger, they freeze, extending their necks upward so that they appear to be part of the tree. Potoos also use this technique to protect their unhatched eggs. Rather than constructing a nest, potoos lay a single egg on a branch or stump. The male and female potoos then take turns sitting on the egg to camouflage it from monkeys and other egg predators. Parent potoos continue to sit on their young to camouflage them for two months. Once the baby potoo is too large to hide under its parents, it will adopt the same freeze behavior as its parents. With their white feathers, the baby potoos often look like fungus to predators. Some leaf-mimic katydids have such detailed camouflage that you can find what look like leaf veins on their skin. (Courtesy of Wikimedia Commons)

To conceal themselves from birds and other predators, several species of katydids have evolved camouflage that resembles leaves. The wings of the bug are often crinkled to resemble actual leaves, and some katydids’ camouflage is so detailed that you can see what look like leaf veins on their skin. There are both brown and green variations of the insect that take on the appearance of either living green leaves or dead brown ones. Silky anteaters hide out in kapok trees where they resemble the fuzzy balls formed by the flowering fruits. (Courtesy of Wikimedia Commons)

Though the silky anteater is not very rare, it is almost impossible to spot due to its excellent camouflage. The nocturnal anteater hides out in the branches of kapok trees during the day, curling up into a ball to sleep and blending in with the kapok tree’s pods, which are of similar color and texture to the anteater’s fur. The golden morph of the eyelash pit viper can only be found in Costa Rica where it often hides out in trees with yellow palm fruits. (Courtesy of Wikimedia Commons)

Though smaller and less aggressive than some of Costa Rica’s other venomous snakes, the eyelash pit viper can still be lethal to humans, and with its variations of vibrant colors, the eyelash pit viper is as beautiful as it is deadly. In Costa Rica, eyelash pit vipers come in brown, gray, light blue and rust-colored. There is also a bright golden morph of the snake that can only be found in Costa Rica and aids the viper in blending in with palm fruits. The snake’s “eyelashes” are a small row of scales over its eyes that biologists believe the snake uses to distinguish its profile from other snakes and aid in camouflage. The Celerio Sister caterpillar employs elaborate camouflage to protect itself before it becomes a butterfly. (Courtesy of Wikimedia Commons)

Before morphing into a beautiful orange, white and black butterfly, the Celerio Sister caterpillar camouflages itself to blend in with mossy tree trunks. The caterpillar dwells in Costa Rica’s rain forests and cloud forests, and has antennae near its head that look like mossy plants.