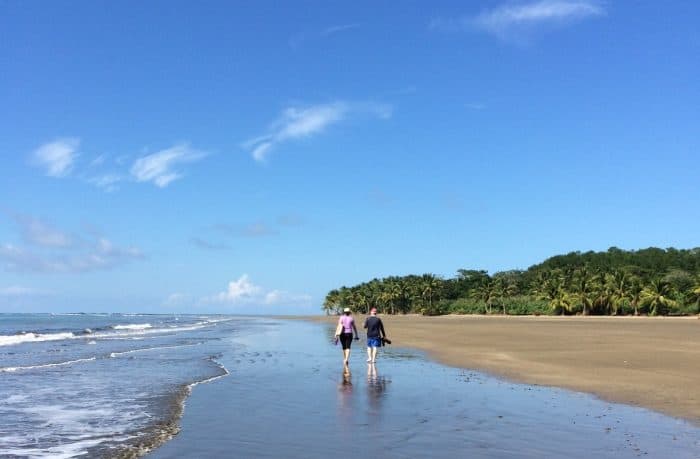 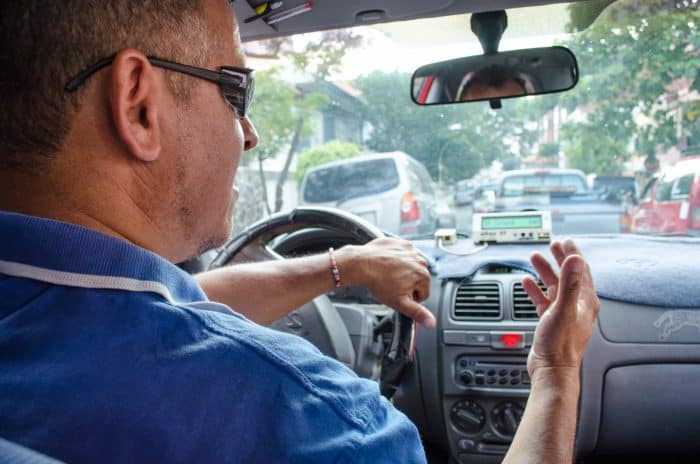 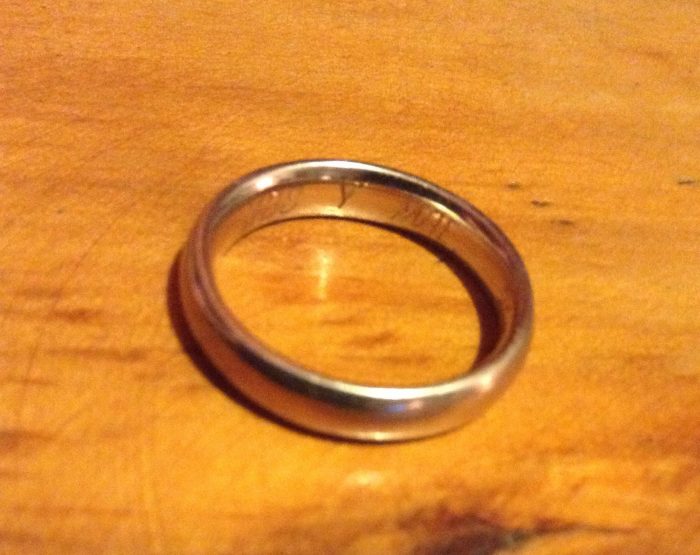 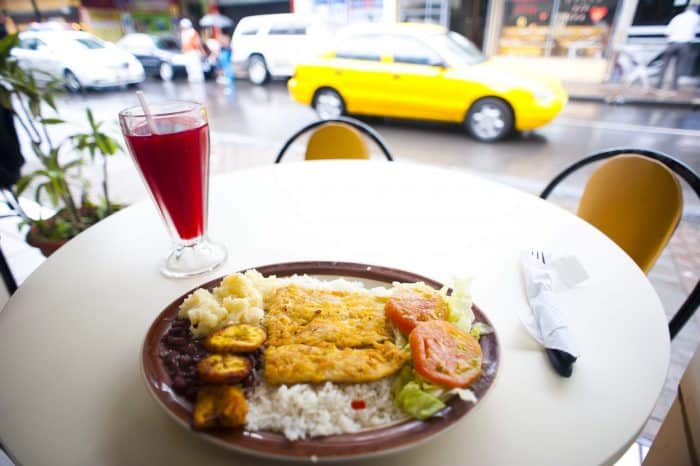 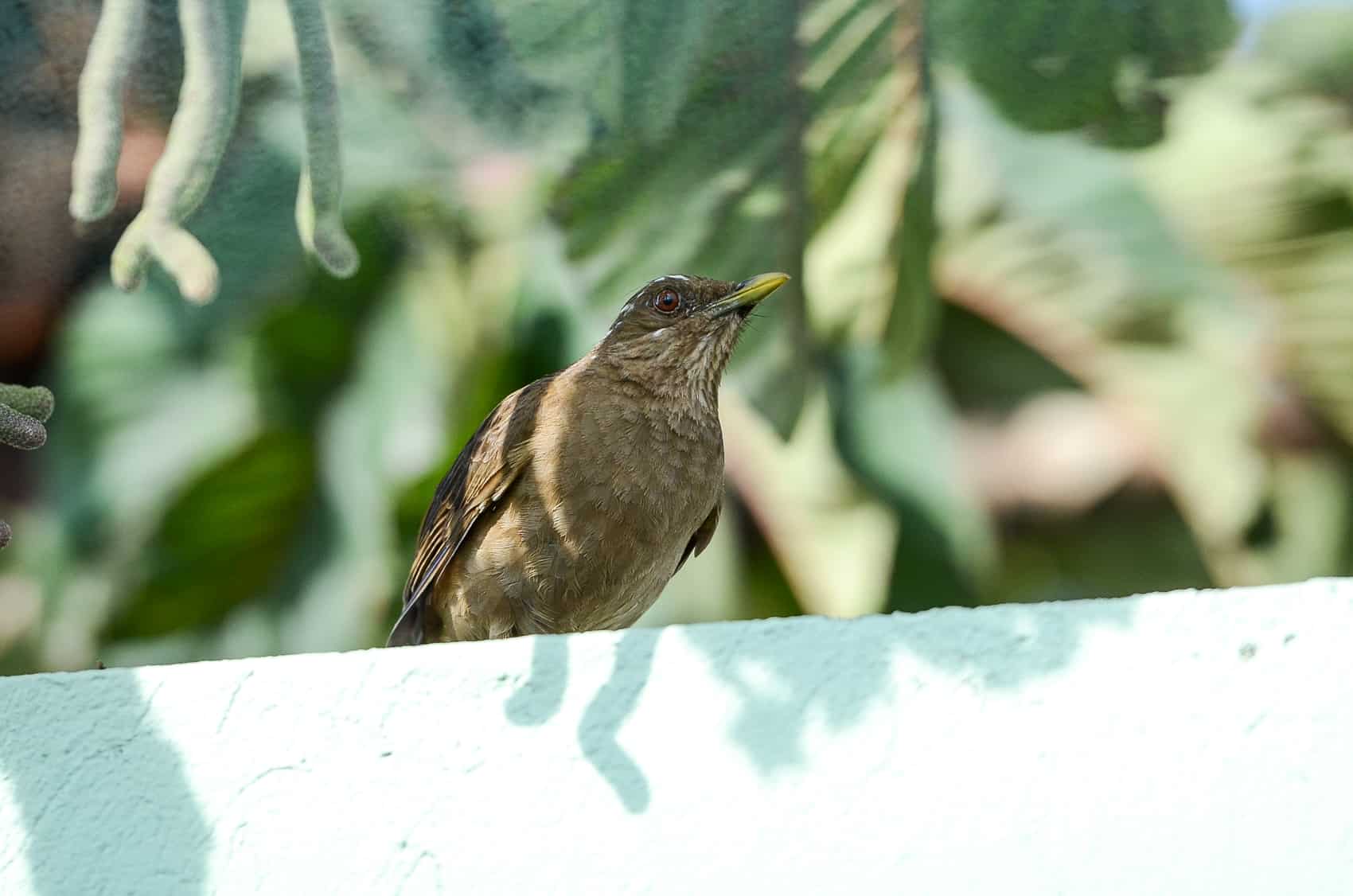 Should you take an umbrella? Just ask a yigüirro. (Alberto Font/The Tico Times)

It was still pitch black when I sat up in bed, thoroughly annoyed.

“What is that damned noise?” I asked my husband, on whom the incredible din outside our window seemed to have absolutely no effect.

“The national bird of Costa Rica,” he murmured, his pride waking up even before he did.

In response, he uttered a sequence of vowels that were unintelligible to me at the time, but which I know in retrospect must have been “yigüirro.”

“Why is it making so much noise at night?”

Costa Rica is home to any number of spectacular, jaw-dropping birds, but it’s not the scarlet macaw or gorgeous toucan or lovely motmot who’s calling the shots: It’s the clay-colored thrush, a plain gray bird whose unremarkable appearance is matched by its unfortunate scientific name, Turdus grayi. I like to think that Costa Rica’s choice of the yigüirro reflects the country’s practical nature. Surrounded by so much feathered beauty, they went with the bird that knows what’s going on. They say that una golondrina no hace verano (one swallow does not a summer make) but Costa Rica does have a single bird who makes winter. At least, that’s how it feels.

Every year as summer winds down and the rains approach, like clockwork, much more reliable than any groundhog, the yigüirro and its unique song “ask for rain.” María Mayela Padilla, in her book “Dichos y Refranes de los Ticos,” writes that according to one veterinarian she consulted, the birds actually sing at this time of year because it’s their time to mate – but she goes on to question that conclusion because the birds look so content when the rain does arrive and they splash around in the puddles.

At any rate, while I’ve made a happy avocation of listening to the words and phrases on Costa Rican lips, one of the sounds that would remind me of Costa Rica most quickly, years and miles hence, wouldn’t be human at all. It’d be the unmistakable, slightly spooky annual reports of the country’s best weathermen.

That said, there’s a whole host of words and phrases to learn when it comes to Costa Rican weather. In honor of the rainy season now (possibly) nearing its end with some massive November downpours, I’d like to offer up a few. First and foremost, it’s important to understand that rain is not necessarily rain. Allow me to explain. I once went to a conference in Toronto and, when it ended, arranged with a Panamanian colleague to split a cab from our hotel to the airport.

On the morning of our departure, she called my room to ask whether we should leave earlier than planned. “I checked the forecast, and it says it’s going to rain,” she said. I glanced out the window at a nondescript, heavy, gray day, and told her no, we’d left plenty of wiggle room. Later, as our taxi pulled away from the curb, a light rain was falling.

“I thought it was going to rain,” she said, gazing out towards the CN Tower.

I burst out laughing, not at her, but at myself, for forgetting. How many times had my husband and I had the same conversation? “Está lloviendo,” I’d say, it’s raining, and he’d correct me. This isn’t rain. It’s hair of the cat (pelo de gato), or llovizna, or está garuando. Rain, real honest-to-God lluvia, is a serious affair. Rain means that every pothole or crevice in sight – that is, thousands – overflows. Rain means that the umbrella you optimistically hold overhead keeps water away from your face, but not from the rest of your body, because sheets of water are blowing in horizontally. Rain is a plans-changer, a car-swamper, a water-oozing-down-your-walls event.

When it’s really a proper show-stopper, it’s an aguacero or a chaparrón or even a baldazo – a bucketful. So when a Costa Rican gazes skyward and tells you, “Está de agua,” or “Se puso de agua,” or “Ya viene el agua,” or you’d better pay attention, ‘cause things could get real. (You might also hear “Se vino la doña de los frescos” – literally, “The lady who sells drinks is here” – in which case you should grab your umbrella, not your milk money.)

How to beat the rainy season with kids

Costa Rica may have only two seasons, differentiated by factors that, to a person used to ice storms and leaf piles and dog days, might seem slight. But those two seasons don’t mess around. Not only does rain come by the bucketful, but the seasons also come and go with panache, like divas given a dull script but determined to bring it to life through sheer force of will.

Summer goes out with intense heat that leaves you gasping, droughts that leave the Guanacaste plains a spiky brown. Winter, or the rainy season, leaves you drowning by degrees in endless umbrella puddles, fantasizing about afternoon walks and Christmas breezes. What’s more, both seasons, while sashaying out the door, throw in some apocalyptic events for good measure. Mild-mannered birds wake you up in the night. Little earthquakes abound, as if to toss us into the next season by the scruffs of our necks. Everyone gets terrible colds (“Ah, it’s the change of the weather,” the pharmacist will say). Volcanic ash is falling? Seems par for the course. I wouldn’t be that surprised if frogs or locusts showed up, too.

I miss autumn, as I say frequently. I miss long summer nights and hot cocoa after snow and the first shoots of spring. But I’ve found that learning another weather is just like learning another language, with the same broadening of perspective, the same opening of the soul. It’s humbling to be instructed in the specific amount of precipitation that constitutes pelo de gato. It’s satisfying to feel the coming of a real aguacero. It’s comforting to find familiarity in what was once very foreign: the expressions that capture a particular feel of water on skin; the phrases that connote the sound of a storm coming at you across a thousand tin roofs; the birdsong that tells the story, without any words at all, of the ominous press of heat, the heaviness of clouds, the silence of a country at night, waiting for a change.

Katherine Stanley Obando is The Tico Times’ managing editor. Portions of this column originally appeared on her blog, “Love in Translation,” where she writes about Costa Rican language and culture, and raising a child abroad. Her book by the same name was published by The Tico Times Publications Group in 2016 and is available for purchase worldwide.