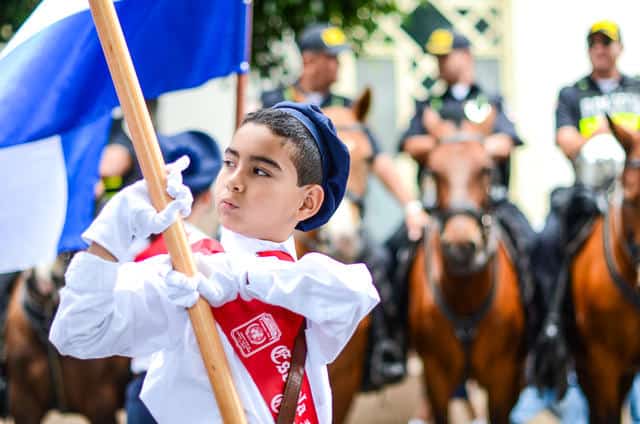 Costa Rica's colors are on display every year in Sept. 15 parades to mark Independence Day. (The Tico Times)

This column was published last year to reflect on Costa Rica’s unique path to independence and democracy. It is still relevant today.

Most societies celebrate important dates. For the countries of the Americas, one of the most important, without a doubt, is the day in which independence was declared from their European colonial masters. In the case of most of the countries now considered part of Latin America, that day signifies independence from Spain.

For some of these countries, the date coincides with their birth as a nation state. That is not the case for Costa Rica. On Sept. 15, 1821, Guatemala declared its independence from Spain, following what Mexico had done on Feb. 24 of the same year. It wasn’t until Oct. 13 that the news of that independence arrived in Costa Rica by messenger. (As a colony, Costa Rica was administered by Guatemala.)

After some brief deliberation, Costa Rica ratified the declaration. Independence was thus not gained as a result of warfare. There was no war of independence. Costa Ricans became owners of their own destiny by simply ratifying Guatemala’s declaration.

If those are the historical facts, what significance should we give to the 15th of September? For Costa Ricans, the importance of this date is that it represents the beginning of the process through which we started to define ourselves as a nation. During this process there were times when we had to fight to maintain our independence, such as occurred during 1856 and 1857. But by the turn of that century, Costa Rica had firmly defined itself as a liberal, independent state, with a vision for the future.

The significance of the date can be found in what Costa Rica has come to be as a nation and a society. Within a Central American context, or even within all of Latin America, Costa Rica clearly stands out by the success with which it built its sovereignty. This success is the result of many factors, but one stands out above the rest: its political and social democracy.

In fact, since the beginning of the last century, Costa Rican society has made great strides to further refine the definition of who we are as a people, in the context of being a true political democracy. Starting in the 1940s, this political platform began to be complemented by a social democracy in which the state plays an important role in the distribution of income.

This political and social democracy is, without a doubt, a cornerstone of who we are that has guided the development of a consolidated, cohesive nation. It has given us a degree of social cohesion and political stability that has led to what today is a politically, socially and economically viable entity.

This is of particular significance in today’s world. The celebration of our 193rd year of independence serves as an opportunity to reflect upon some of the challenges that we face as a people that could potentially threaten this hard-fought social and political democracy.

The value of a democratic political system rests in its ability to legitimize the government’s ability to exercise its power based on the will of the people. Therefore, a democracy faces problems when its leaders are not able to make decisions that address the biggest challenges that confront the nation as a whole.

We are currently facing, as a social democracy, one of the greatest challenges that threatens our security as a nation and as a people. It threatens our very existence, and our ability to maintain what we have for so long strived to be. Our system of guaranteeing our security as a society is the primary instrument by which we manage the distribution of income among Costa Ricans. Our social democracy is key to our political stability and cohesion as a people. Its weakening threatens the basic tenets of who we are.

Our system of social democracy not only affects the distribution of wealth among social classes, it also affects, and is thereby affected by, the regional distribution of wealth. Increasing inequality in a regional context is perhaps the greatest danger we currently face as a nation. It is an inequality that punishes some regions in particular, including the Atlantic coast, Guanacaste and the southern Pacific coast.

Perhaps the most worrisome aspect of this threat is that it could weaken the ability of the state to govern its own territory. The Atlantic region is most at risk. Inequalities have become exacerbated, both economically and socially, which result in greater poverty and fertile ground for drug trafficking. Drug cartels represent a direct threat to the state and its ability to maintain its control throughout the country. One only has to look to Mexico to see where this might lead.

Clearly, these challenges to our society are critical, as were those that faced the colonial government that dealt with Guatemala’s unilateral declaration of independence 193 years ago. It was their moment, at that time, that set in place the process that has led to what is now Costa Rica, and has made us who we are as Costa Ricans. That process overcame incredible obstacles, any of which could have stopped it in its tracks. We have every reason to believe that we are still the same people, still able to confront and resolve any obstacle placed in front of us.

Julio Jurado Fernández is a Costa Rican constitutional lawyer and a Tico Times board member.