Costa Rica Breadfruit at a Glance 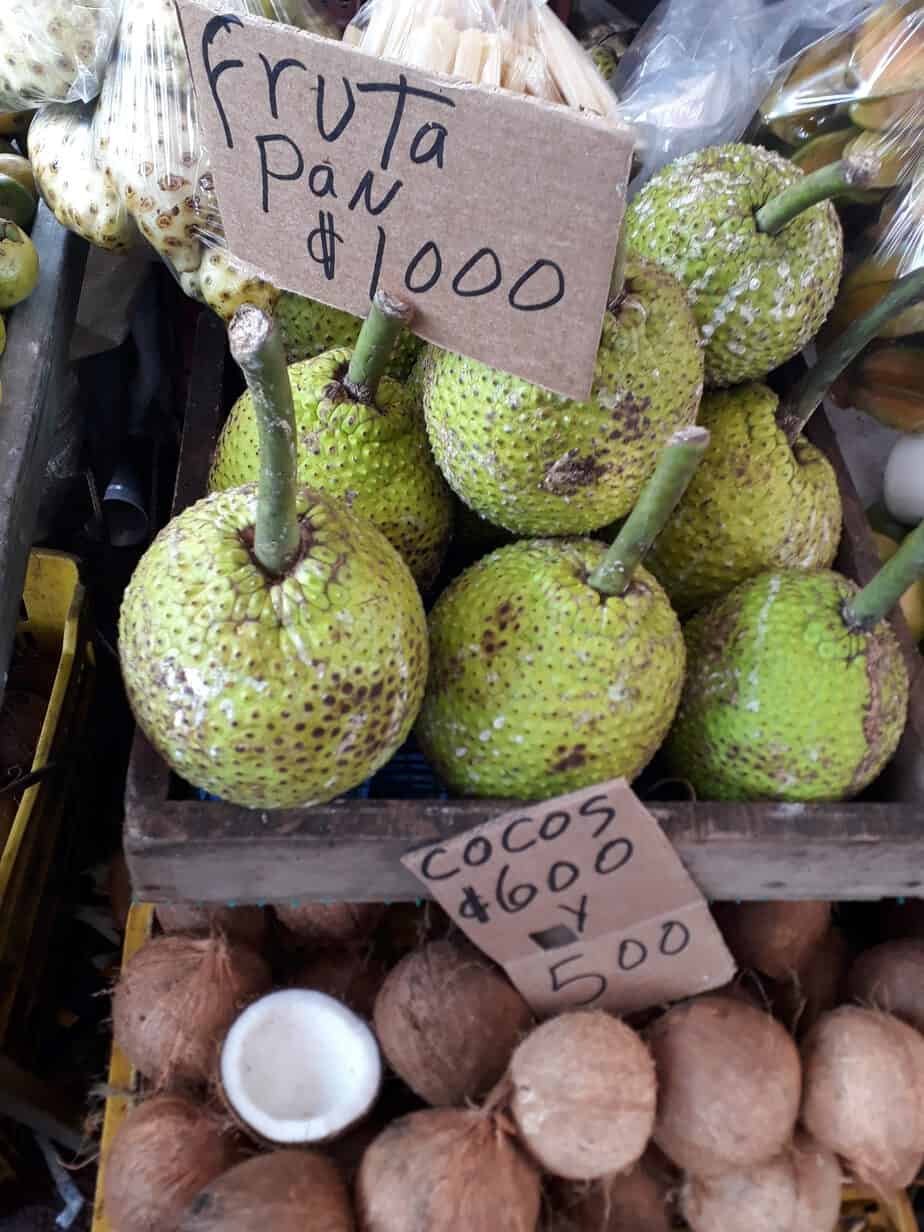 Breadfruit for sale at the Guadalupe feria. (Photo via Krystal Porter. )

Breadfruit is called fruta de pan, árbol de pan or pan de pobre in Spanish. The seeded variety is known as breadnut, or castaña or ramón in Spanish.

The breadfruit is believed to be native to a vast area extending from New Guinea through the Indo-Malayan Archipelago to western Micronesia. It is believed to have been distributed in the Pacific area by migrating Polynesians. Hawaiians say it was brought from the Samoan island of Upalu to Oahu in the 12th century. The Spanish were the first to transplant the breadnut tree from the Philippines to Mesoamerica.

The story of Captain William Bligh’s first voyage to Tahiti on the Bounty in 1787, and the loss of his cargo of 1,015 potted breadfruit plants because of the mutiny of his crew, is well known.

He set out again in 1791 and delivered 2,126 plants of five different varieties to Jamaica in February 1793. Later, immigrants from this island distributed these trees in the Caribbean coastal region of Central America. The breadfruit is more commonly found in coastal regions, while the breadnut has adapted to both the coastal and midrange regions.

The breadfruit tree is a handsome, fast-growing tree from six to 25 meters tall, often with a smooth, gray trunk buttressed at the base. The leaves are evergreen, ovate, 23-90 centimeters long, and 20-50 cm wide, entire at the base, then more or less deeply cut into five to 11 pointed lobes.

The upper surface is bright green and glossy, with conspicuous yellow veins, and the underside is dull, yellowish and coated with minute, stiff hairs. It is difficult to distinguish between the two types of trees; however, the breadfruit has a soft, white pulp with no seeds, while the breadnut contains many seeds.

The fruit is spherical in shape, five to 30 cm in diameter, with a pattern of conical cells on the surface. It starts out green, turning to yellow-brown when ripe.

The ripe pulp of the breadfruit is eaten raw, baked or steamed, while the chestnut-like seeds of the breadnut are boiled or baked and peeled to provide a nutritious meal. Breadfruit flour contains 4% protein, 77% carbohydrates and 331 calories per 100 grams.

The seedless breadfruit is low in protein compared to the breadnut, which is considerably higher in protein (13%). Both are valuable food crops that can be grown in the orchard.

Older, dried leaves of these trees are used to prepare a tea for the treatment of kidney stones and bladder infections. In Trinidad and the Bahamas, a decoction of the breadfruit leaf is believed to lower blood pressure, and is also said to relieve asthma. Crushed leaves are applied on the tongue as a treatment for thrush.

The leaf juice is employed for earaches. Ashes of burned leaves are used on skin infections. A powder of roasted leaves is employed as a remedy for enlarged spleen. Toasted flowers are rubbed on the gums around an aching tooth. The latex is used on skin diseases and is bandaged on the spine to relieve sciatica.

Preparation: One large leaf is shredded and boiled in four liters of water for 30 minutes. Dosage: One to three cups of tea per day.

Notes: These trees can be particularly useful for gardeners in the coastal and midrange zones of Costa Rica; however, because of their large size, they are not recommended for small home lots.

The breadfruit tree can be propagated only from new vegetative shoots that arise from the roots of the mother tree, which is why they are so rare and difficult to acquire. On the other hand, the breadnut is very common in Costa Rica, and the fruits or seeds can often be found in local farmer’s markets, and can be used for planting.

Plant one seed in a plastic nursery bag with fertile soil and water frequently. Young seedling trees prefer partial shade for the first year of growth; then they can be transplanted to permanent sites. Rich, fertile, soil with wet to moist conditions, such as riverbanks, are best for these trees.

It is also important to note that livestock love to eat the leaves, so fencing is essential to protect them in their early stages of development.