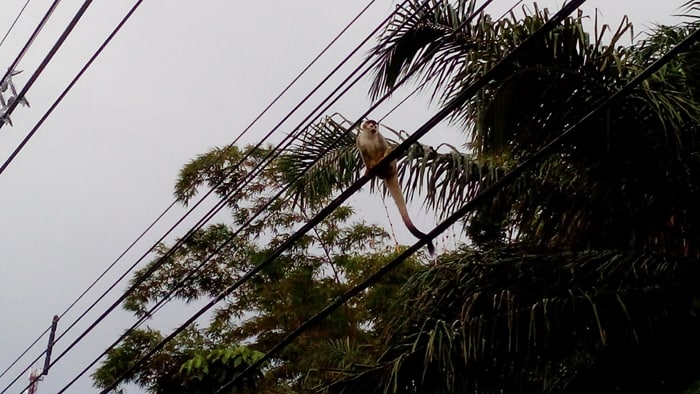 No one knows how many monkeys and other wildlife are killed by electrical infrastructure, but the government admits it’s a problem. Will it be fixed? (Karl Kahler / The Tico Times)

In this two-part series, Helene Engler looks at the danger that power lines pose to Costa Rican wildlife, the debate surrounding the issue, and the activists trying to fix the problem.

In Costa Rica, monkeys travel across unprotected power lines as naturally as they would the vines and branches of the rainforest — and they often have no other choice. As property developments expand and habitat becomes segmented, primates in search of their feeding and resting trees are frequently left to depend on the wires as a bridge to cross roads or cleared land, or to move between isolated forest patches.

It can be a deadly decision. As monkeys thread their way between wires en route, their bodies can form a connection between two parallel wires, completing the circuit and causing a sizzling electrocution. They face additional risk from high voltage transformers attached to the wires.

The result can be harrowing: Dead howlers, hanging from an overhead wire, or orphaned infants with electrical burns on their hands, feet, and tails, sometimes with fingers singed entirely off, still clinging to a mother’s corpse.

No one knows how many monkeys and other arboreal wildlife are killed by such electrical infrastructure — though some estimates from the National University of Costa Rica and a 2014 study suggest the numbers run in the thousands per year, with mammals having the greatest risk. And experts say the problem is especially notable in Costa Rica, where the vast majority of distribution lines run overhead and where many have been left uninsulated for cost reasons.

“Look at where [the monkeys’] home is,” says Vicki Coan, who founded the SIBU Sanctuary in Costa Rica’s Nicoya Peninsula. “Their home is not on the ground. Their home is in the canopy.”

In response to the problem — and to the continued efforts of wildlife activists seeking to force change — Costa Rica’s Ministry of Environment and Energy (MINAE) met last month to sign a “Guide for the Prevention and Mitigation of Electrocution of Wildlife in Power Lines.” The document is described as “the first national effort to work together in proposing alternatives to prevent electrocution” — and the ministry laid out the problem in comprehensive terms.

“In Costa Rica, hundreds of animals die each year from electrocution on power lines, many of them suffering serious injuries that limit their activities, with a significant impact on populations and ecosystems,” the document states. The electrocutions also cause problems for people, including power failures, high costs for repairing damaged equipment, and economic losses related to such events, according to the statement.

The official gesture was welcomed by activists — though it is in no way clear that the government shares their sense of urgency. The proposed electrocution protection guide has just been officially released to the public, and some attendees at the meeting, while heralding progress, said that most of the discussion there involved explaining the roles of the agencies and utilities involved in drafting the document.

They also expressed concern that while guidelines recognize the electrocution problem and make recommendations for improved protection of live electrical wires and transformers, they do not require it, nor do they provide any means for enforcement.

“I do not think that there will be significant changes in wildlife electrocution incidents,” said Rafael Ángel Quesada Rodríguez, a former engineer for the Costa Rican Electricity Institute (ICE), which owns roughly half of the nation’s power lines.

Quesada, who retired from the company in 2012, has since been an outspoken crusader for better protecting the country’s power lines. The problem, Quesada noted, is that power companies are still not obliged to carry out any sort of prevention and mitigation actions.

Tune in on Thursday to read about the debate surrounding the issue and what some activists are trying to do to mitigate the problem.

Helene Engler is an educator, science writer, and editor, and published author based in Austin, Texas. She received her Ph.D. studying tropical butterflies and has written for Nature, The Journal of Chemical Ecology, and The Refresh, among other publications.

This article was originally published on Undark. Read the original article.