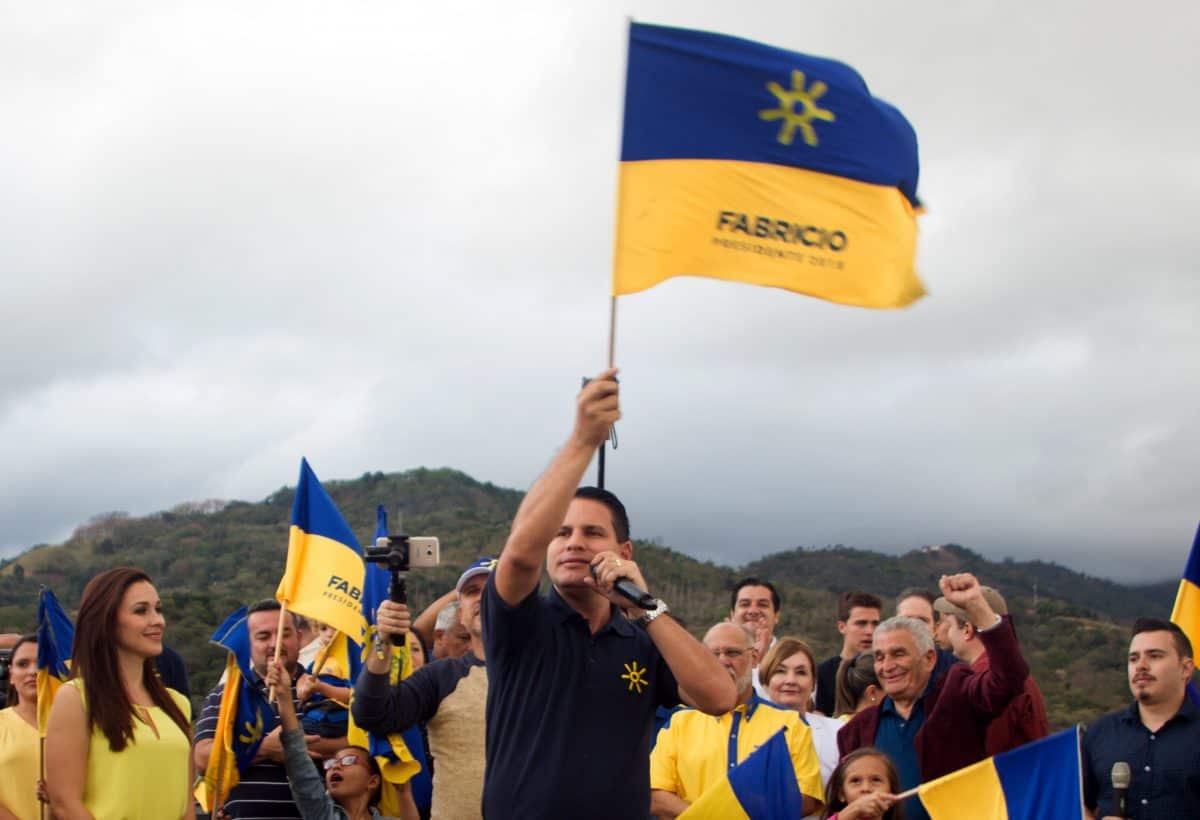 Music has been at the center of Fabricio Alvarado’s life: he learned to play the guitar in his childhood, and went on to become a popular singer within Costa Rica’s evangelical community. Today, he is using the microphone for a different purpose: as a presidential candidate in Costa Rica, representing a party born out of the Pentecostal movement.

Running for the conservative National Restoration Party (PRN), linked to the country’s Neo-Pentecostal churches, Fabricio Alvarado is neck-and-neck in the polls coming up to tomorrow’s elections against Carlos Alvarado (no family relationship).

Fabricio Alvarado, 43, is a journalist and evangelical preacher who until now was best known for more than a decade’s work as a TV reporter, and then for his term as a member of the Legislative Assembly, representing the PRN. He resigned that seat to dedicate himself to the presidential campaign.

Married to Laura Moscoa and with two small daughters, Alvarado comes from a middle class household led his mother, Dulce María Muñoz, after his parents separated.

With a smooth, emotional speaking style, Alvarado has traveled the country giving his message of “manos limpias” (“clean hands”), seeking to create a contrast between himself and his opponent’s Citizen Action Party (PAC), which has seen several members become embroiled in a high-profile corruption scandal over the past year.

His success in the current election cycle was unexpected, as was his entry into Costa Rican politics as a legislative candidate for the PRN in 2014.

‘I was not going to be a candidate’

Alvarado said in an interview with the TV network Teletica that he became a legislative candidate for his party in 2014 after the previous candidate withdrew from the race one week before the party convention.

“I was not going to be a candidate of anything,” recognized Alvarado, who says he accepted his party’s invitation to jump into the race “after consulting God, my wife and my pastor”.

With no academic degree or political experience aside from his incomplete legislative term, Alvarado has shot back at critics who point to his lack of capacity to govern, repeating in debates that “people with experience have left us with bad experiences. I fully trust God, and if I’ve gotten here, it’s because I am capable.”

Attracted to TV in his adolescence, he began studying communication at the University of Costa Rica (UCR), though he did not graduate.

It was television that made him into a known figure in the country, as a news reporter and news presenter for the Repretel network.

While in high school, he experienced the most traumatic moment of his life with the separation of his parents, which the candidate remembers as “a violent separation with agressions between them.” He says this affected his self-esteem for years.

Alvarado says that in 2003, as a TV journalist, he was able to overcome the trauma of that separation when he joined the evangelical Ríos de Alabanza church and received “counseling and healing” that allowed him to approach his father, from whom he had distanced himself after the separation.

In that church he met Laura Moscoa, whom he’d marry on a special date: July 7, 2007, chosen because seven is considered a Biblical number of perfection.

Two years after journalism he turned away from full-time journalism work to dedicate himself to Christian music and preaching. However, he continued doing some independent communications work, and was hired by the PRN to produce promotional videos.

The party later recruited him for a bigger role as their 2014 legislative and 2018 presidential candidate.

Sociologist and theologian Alberto Rojas, from the National University (UNA), says that the founder of the PRN, the evangelical pastor and former legislative representative Carlos Avendaño, saw political potential in Alvarado.

“Fabricio was born in politics because of Carlos Avendaño,” Rojas told AFP.

His presidential candidacy, the party’s first, was originally intended to help the group increase its number of seats in the 57-member legislature. (On Feb. 4, it did just that, electing 14 legislators instead of just one in the previous period; that presidential candidate also topped a field of 13 to make it through to the second round.)

However, his real rise in the polls would take place after gay marriage became the focus of the campaign in early January.

Alvarado recognizes that his threat to withdraw Costa Rica from the San José-based Inter-American Court of Human Rights (IACHR) in retaliation for its ruling in favor of same-sex marriage was the factor that boosted him to the top of the polls.

“The ruling from the Inter-American Court of Human Rights was a breaking point, and it would be shabby not to recognize it,” Alvarado said. “But it also benefited the government’s party.”