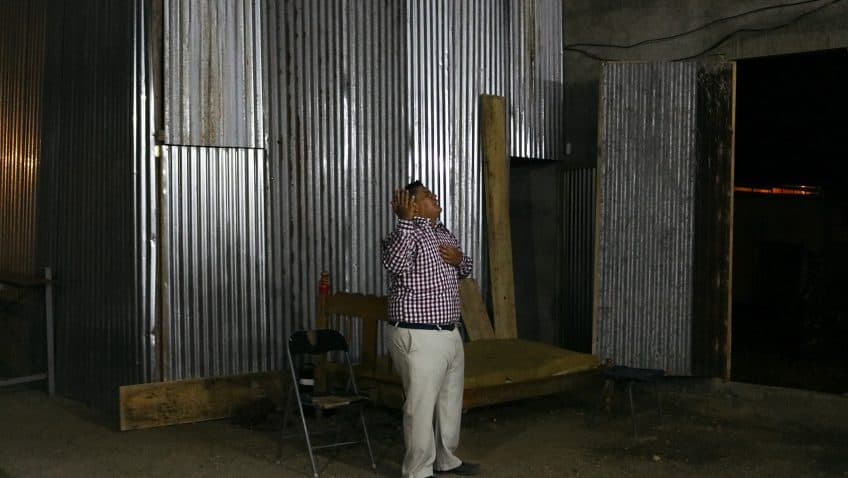 This Pocora, Limón church, the Path to Heaven Christian Center, depends on donations from congregants for its infrastructure and has been in the process of building its own facility for 1.5 years. (David Bolaños / Radioemisoras UCR)

On Feb. 4, 2018, Fabricio Alvarado – a presidential candidate who just weeks before was at only three percent in some polls – capped off his upward surge by winning the first round of voting in Costa Rica’s national elections.

In no community did he receive a higher percentage of votes than in Pocora, Guácimo, in the province of Limón.

The Tico Times is pleased to translate David Bolaños’ in-depth feature, originally published by Radioemisoras UCR and the weekly Semanario Universidad examining the factors that led to Alvarado’s massive support in Pocora. Part I of IV.

“It’s not the same mentality of certain candidates for the presidency who aren’t Christians, as that of a person who has Christ in his heart. A difference that marks Fabricio is that he has Christ; he’s a son of God.”

Pastor Rocío Thomas spoke these words to a dozen listening congregation at the Christian Pentecostal Sendas of God Church, one recent Saturday night in the center of Pocora, a small district of the canton of Guácimo in the province of Limón.

That same day, congregants listened to their leaders’ messages in 15 similar churches in the district.

At first glance, Pocora is no different from many of the towns that sprung up next to the Atlantic railway in the province of Limón at the beginning of the 20th Century and those that, in the railroad’s eventual absence, grew alongside Route 32.

However, during the elections of this past Feb. 4, Pocora stood out from the rest of the country: this was the district that voted the most heavily for the National Restoration Party (PRN) candidate Fabricio Alvarado.

See the audiovisual chronicle of this report.

While Limón was in general a huge source of support for Alvarado, an evangelical journalist, preacher and former legislator, Pocora stood out even in that PRN-heavy province: 55.5 percent of valid votes, which is a fourth of the population in that area. No other party was close to that proportion of victory in other regions.

The other districts from Limón that had similar margins for the PRN are the canton of Matina: Carrandí (54.5 percent) and Matina (51.8 percent).

The second-place party in said locations was the National Liberation Party (PLN) with an average of barely 17 percent of the valid votes, after years of dominating the entire province.

Besides the abundance of evangelical churches, Pocora, Carrandí and Matina share the characteristic that their inhabitants live in the shadow of abandonment cast over their region by a political system focused on the capital.

Those communities also turned out like no others for a party that before 2014 only existed in San José and that was almost invisible, electorally speaking, in Limón before now. Likewise, they were motivated by a candidate who spent the majority of his life in Desamparados, an urban municipality just south of San José.

What created this connection between towns such as Pocora and a politician like Fabricio Alvarado? "Here, people go to church and trust a lot in God, and Fabricio is promising that. We think that because he's a Christian person and goes to church, he's not going to change paths," says Yanory, a resident of Carrandí. David Bolaños / Radioemisoras UCR

With its 5,200 inhabitants, Pocora is far from being one of the most populated settlements in Limón. That’s why that 55.5 percent of support for Fabricio Alvarado translates to only 1,548 valid votes.

However, the rest of the parties obtained miniscule numbers in comparison. For example, the Citizen Action Party (PAC), who is now competing against the PRN in the two-man presidential runoff that will culminate on April 1, only received 265 votes in favor of said district (9.4 percent), coming in third in Pocora overall.

This political scenario was vastly different from the 2014 elections, when the National Liberation Party, the left-wing Broad Front (FA) and the Libertarian Movement (ML) led in Limón.

Jairo Adams, business manager and collaborator of the Church Created to Adore in Pocora, considered that his community turned its back to the parties from four years ago because “they didn’t show results.” “I was surprised in the elections because people voted for Liberation, and I said: ‘How is it that people keep voting for Liberation?’ I went to work with them because a friend asked me to do so; if not, I wouldn’t have gone,” explained a resident Venecia, Carrandí, who asked to be identified only as Yanory.

Ubaldo Urtecho, a former union member from Matina, said that he voted for Liberation even though the evangelical congregation he goes to, the Shekinah Apostolic Mission, “agreed” to vote for the PRN.

The pastor from that church, Pedro Cubero, admitted that he has promoted the PRN.

“Since one has the opportunity to speak to many people from here, one can tell people that if we want a change, we’ll try it. It’s telling others: ‘I believe this is the one’ – take it or leave it,” said the pastor, whose congregation in Matina comprises 80 people, in addition to 70 other followers in the next district, Batán.

Urtecho said that the church promoted the production of of shirts and flags of the PRN for Election Day.

Article 28 of the Political Constitution establishes that “clergy or laypeople” cannot make political propaganda “invoking motives of religion and using themselves as a medium of religious beliefs.”

Stay tuned for Part II in this series, which examines some of the problems facing these communities and their hopes that a Fabricio Alvarado presidency will address these challenges.