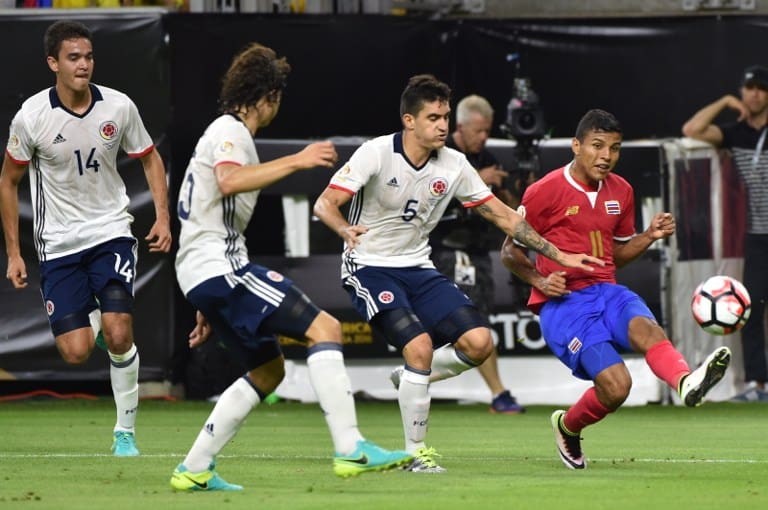 HOUSTON, Texas – It took less than two minutes for Costa Rica to prove to the world that it still had some fight left in it.

Young striker Johan Venegas spun around in front of the box and struck in a beautiful goal to the top right corner to start the scoring for La Sele in the second minute of its 3-2 win over Colombia Saturday night at NRG Stadium in Houston, Texas.

Even with its Copa América fate decided, the Costa Rica men’s national team had by far its best performance of the tournament, washing out the bitter taste as it now heads home after failing to advance past group play.

Venegas’ goal was the fastest score in this year’s Copa América, but Colombia answered right back minutes later with a goal of its own when defender Frank Fabra broke through La Sele’s defense.

Venegas, starting at striker in place of the injured Marco Ureña, looked extremely comfortable in that role and gave Costa Rica a consistent attack it hasn’t had with Ureña or Álvaro Saborío. The 27-year-old who usually plays on the wing then came back in the 34rd minute to give La Sele its second goal when he juked the life out of Felipe Aguilar and sent a cross in the box that bounced off Fabra and into the net for an own goal. Midfielder Celso Borges added Costa Rica’s third goal in the 58th minute when he booted in a beautiful cross pass at the center of the box.

In the midfield, La Sele was quick to cut off passing lanes and prevent Colombia from creating many meaningful possessions. On the counter, Borges and Christian Bolaños were aggressive and more accurate with their passes than in the two prior Copa América games.

The impressive showing against the world’s third-ranked team was a complete turnaround from the ugly 4-0 loss Tuesday to the United States and gives this team something to lean on going forward.

Granted, Colombia did rest its best players in anticipation of the quarterfinals, including its best two defensemen for the game and key attackers Juan Cuadrado and James Rodríguez for the first half.

But Costa Rica, too, was empty-handed and without injured defenders Óscar Duarte, Cristian Gamboa, as well as forwards Ureña and Saborío.

Defender Bryan Oviedo, who surprisingly didn’t start over the less experienced José Salvatierra, entered the game after the half to take Salvatierra’s spot on the right wing and try to neutralize Rodríguez. The Everton winger played well in his first action for La Sele since an October friendly against the U.S., helping to stall the ever-potent Colombian attack that came alive in the waning minutes and threatened to tie.

The always dangerous Cuadrado made a gorgeous assist to Marlos Moreno for Colombia’s second goal in the 72nd minute.

Venegas nearly had his second goal minutes later when he just missed the target on a header following a precision cross from Bolaños. Costa Rica then went defensive as it desperately avoided a late-minute barrage from the Colombian attack.

Before the match began, Costa Rica was already eliminated from advancing past the group stage when the United States beat Paraguay 1-0 to secure the second qualifying spot behind Colombia.

Still, Costa Rica picked up the pieces from its shattering 4-0 loss Tuesday to the U.S. and bid a fond farewell to an otherwise disappointing Copa América.