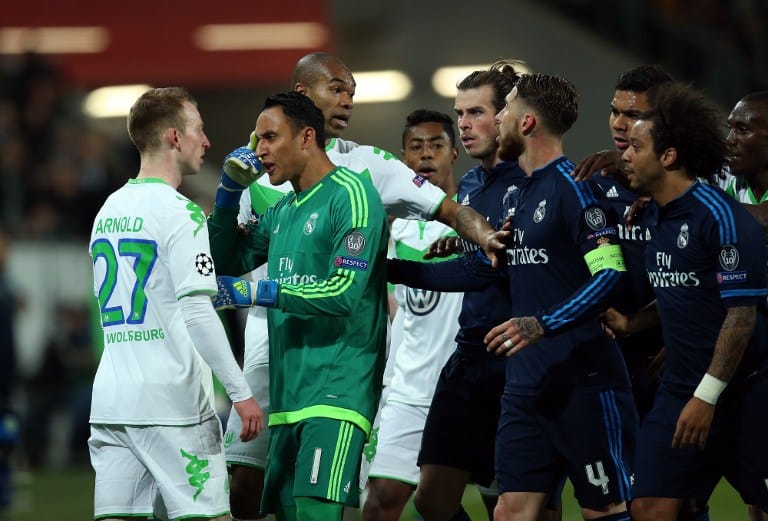 Going into Wednesday’s game against Germany’s Wolfsburg, Navas had played in nine Champions League games without giving up a score. His 10th game, however, went up in flames as Real Madrid’s defense looked disoriented and slow once again in a 2-0 loss to Wolfsburg. Following up an inspired win over Barcelona on Saturday, in which the defense played superb against Barça’s world-class trio, Real Madrid came out flat and has now severely damaged its chances of getting to the tournament’s semifinals.

Casemiro was called for a penalty in the box early on, allowing Ricardo Rodríguez to convert the penalty kick against Navas. Then, in the 25th minute, Wolfsburg’s Maximilian Arnold blew by defender Sergio Ramos right in front of the net to tap in a second goal for the Germans.

Throughout his career, Navas has built up a reputation for being especially good against penalties. In 15 tries against him in Spain’s La Liga, he has only allowed seven conversions, where the normal goal-scoring rate on penalty kicks is more than 70 percent.

That stat didn’t matter much when Rodríguez paused and kicked the ball into the left side of the net as Navas guessed wrong and dove to the right.

His scoreless mark keeps him second all-time behind German legend Jens Lehmann, who went 853 minutes without conceding a goal in Champions League play.

At the end of an amazing run, this article wouldn’t be complete without showing the Costa Rican keeper doing something amazing. During a recent promotional training session, Navas showed off his athleticism by making a “scorpion kick” save on teammate Marcelo.

Despite the underwhelming game, Navas made a key block of a Max Kruse shot in the 89th minute to prevent Wolfsburg’s third goal, which would have given Madrid an even bigger hill to climb in the second and last quarterfinal leg.

Navas and Real Madrid now have a two-goal deficit to overcome as they go back home to play Wolfsburg on Tuesday. With their La Liga title hopes all but gone, if Los Merengues fail to advance to the tournament’s semifinals it will go down as another disappointing season under owner Florentino Pérez. On Saturday, Real Madrid returns to league action as it hosts ninth-place Eibar.