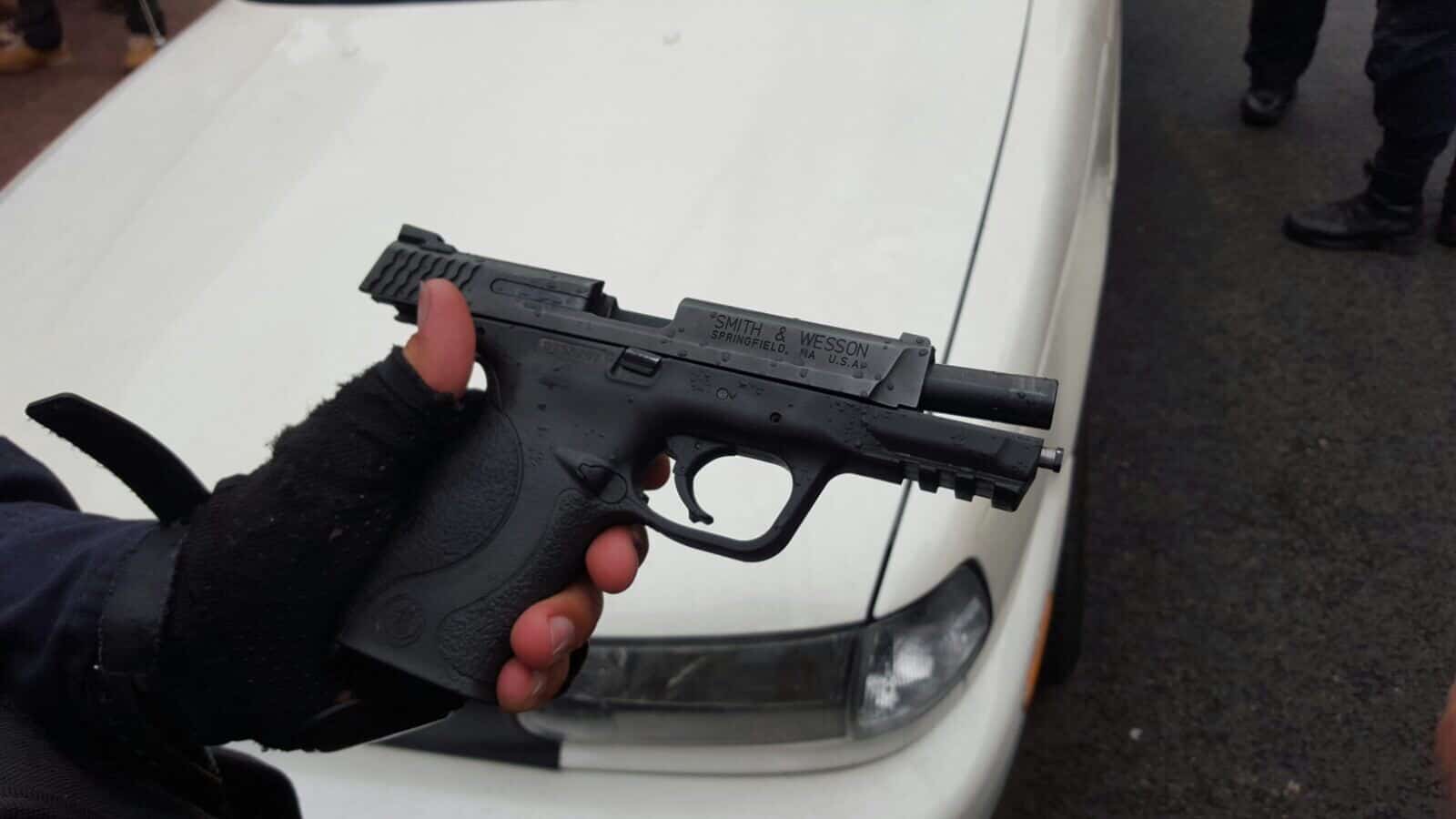 One of the weapons confiscated during police sweeps in western San José on Oct. 15, 2015. (The Tico Times)

Costa Rica hit a troubling milestone over the weekend, surpassing the country’s previous homicide record for a given year.

After several years of decreasing or stable homicide rates, the number of killings spiked in 2015, leading law enforcement officials to call for more aggressive prevention, investigation and prosecution of organized crime.

Last Friday, Costa Rica’s Judicial Investigation Police (OIJ) reported 527 homicides to date in 2015, matching the previous record in 2010. Over the weekend, at least three more homicides occurred in San José, Alajuela and Siquirres, bumping the total to 530 as of Monday. That brings Costa Rica’s rate to 11 per 100,000 people, based on a population estimate of 4.8 million from the National Statistics and Census Institute.

Authorities have blamed organized crime for Costa Rica’s dramatic increase in killings this year. That led Public Security Minister Gustavo Mata to call for a more coordinated approach to fighting organized crime in October, when the number of homicides was 426. Mata called for the creation of an organized crime task force that would be housed at the OIJ and would allow police, investigators and prosecutors to more closely collaborate.

When newly elected OIJ Director Walter Espinoza was sworn in on Nov. 24, he told reporters that fighting organized crime would be a focus of his efforts at the helm of the investigative police. Espinoza said OIJ would conduct a study to determine the specifics of an organized crime task force.

Costa Rica already has surpassed its previous record for homicides, but the year isn’t over yet. Beyond organized crime-related homicides, the holidays can see a spike in other criminal activity. Workers with annual Christmas bonuses often are targeted, and the victim of one of the three homicides reported over the weekend was a lottery vendor selling tickets for the annual “Gordo Navideño” cash drawing. In November, the National Police announced bulked-up patrols as a preventive measure ahead of Christmas and New Year holidays.

According to a 2013 report by the United Nations Office on Drugs and Crime, the global average homicide rate was about 6.2 per 100,000 population that year, with Central America having rates over four times higher. The highest rates occurred in the so-called “Northern Triangle” countries of Guatemala, El Salvador and Honduras.

Costa Rica’s 10 percent jump in its homicide rate over last year is disappointing, but the country still is one of the safest countries in Central America, a region marked by exceptionally high levels of violence. In 2014, El Salvador had the highest homicide rate in the region with 68.6 homicides per 100,000 inhabitants, followed by Honduras with 66, and Guatemala with 31.5, according to local news reports in each country. Panama’s homicide rate that year was 15 per 100,000, and Nicaragua had the lowest on the isthmus at 8.7, according to figures from the United Nations and reported by the daily La Prensa.

In a another report, the Washington, D.C.-based Wilson Center notes:

Central America as a region – and its Northern Triangle countries in particular – have suffered from extreme violence and shifting drug trafficking patterns between South America and the United States for nearly a decade. Several complex and often inter-related problems have coincided to make the countries of the Northern Triangle among the most violent in the world, with one city (San Pedro Sula, Honduras) recording the world’s highest homicide rate for a non-war setting in 2013.

The UNODC also noted that “not all homicide in the Americas is linked to other criminal activities.” According to the U.N. agency, the number of interpersonal homicides in Costa Rica is nearly evenly matched with homicides attributed to other criminal activity, at 47 percent in 2012. The report added that “intimate partner/family-related homicide has the greatest intensity in the Americas,” and other types of interpersonal homicide include “property disputes or revenge-type killings.”

One example is the brutal slaying last week in Costa Rica’s capital of a 45-year-old U.S. woman. The primary suspect in that case is believed to be a scorned Costa Rican lover, investigators told The Tico Times.