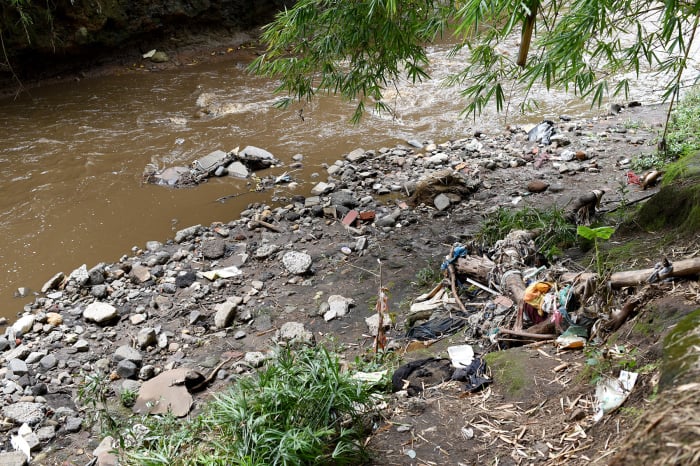 After the body of Franciny Bermúdez Romero was found on the bank of this river by the Children's Museum in northern San José in September, 2015, investigators said they again began to consider another victim found in the area in April of that year as linked to the serial killer. (Alberto Font/The Tico Times)

A ninth victim is now thought to be linked to a Costa Rica serial killer who targets impoverished, drug-addicted women in San José.

Karen Elena Briceño Juárez, whose body was found on April 12 in an abandoned lot in Barrio México, northwest of downtown San José, is yet another victim who investigators say could have died by the hands of a killer who is targeting prostitutes in the city’s poorest slums, known in San José as bunkers.

Law enforcement sources say the death of 35-year-old Briceño is retroactively being considered part of the string of killings by “Mata Indigentes,” or “Killer of the Poor.”

When OIJ Assistant Director Luis Ángel Ávila talked to The Tico Times in August he said investigators have struggled to find physical evidence because many of the bodies were in an advanced state of decomposition when they were discovered. Though The Tico Times had obtained a document from OIJ listing Briceño as a possible victim of the San José serial killer, Ávila denied that any bodies found north of the southern sectors of Hatillo or San Sebastián were being considered as the killer’s victims. In the span of four months, from April to August, seven bodies were found in those poverty-stricken districts south of the city.

But when investigators last found a body they believe to be connected with the serial killer on Sept. 7, it was at the Children’s Museum on the northern edge of the city, not far from where they found Briceño. That victim, found alongside a pile of trash by a river, belonged to 18-year-old Franciny Bermúdez Romero.

All of the victims showed signs of pre-mortem rape, though it is possible the killer agreed to sex with the prostitutes before killing them, Ávila said. According to authorities, the subject is believed to be someone from outside of the slums who contracted a disease from a prostitute in the area’s bunkers, providing a motive with which to kill up to nine women who all fit the same profile. Besides being drug addicts and prostitutes, all of the women have spent significant time away from their families, complicating the investigation that has had to rely on other addicts and homeless people in the bunkers to get leads on suspects.

“We believe the killer is someone who knows the areas very well and may want to be taking vengeance against these women,” said OIJ Homicide Director Hugo Monge in September. “He’s always able to gain the victims’ trust because he’s familiar with the area and the women might know him. It doesn’t seem like he’s a stranger.”

On Friday, an OIJ spokesman said that police have identified a suspect based on DNA evidence collected from three of the victims’ bodies. Investigators are still working to determine whether the suspect is connected with any other killings, he said. Authorities have yet to name that suspect.

Records show that Briceño was married to an Egyptian man when she was killed and that she left behind one child, a 15-year-old girl.