How to stop cow burps from warming the Earth 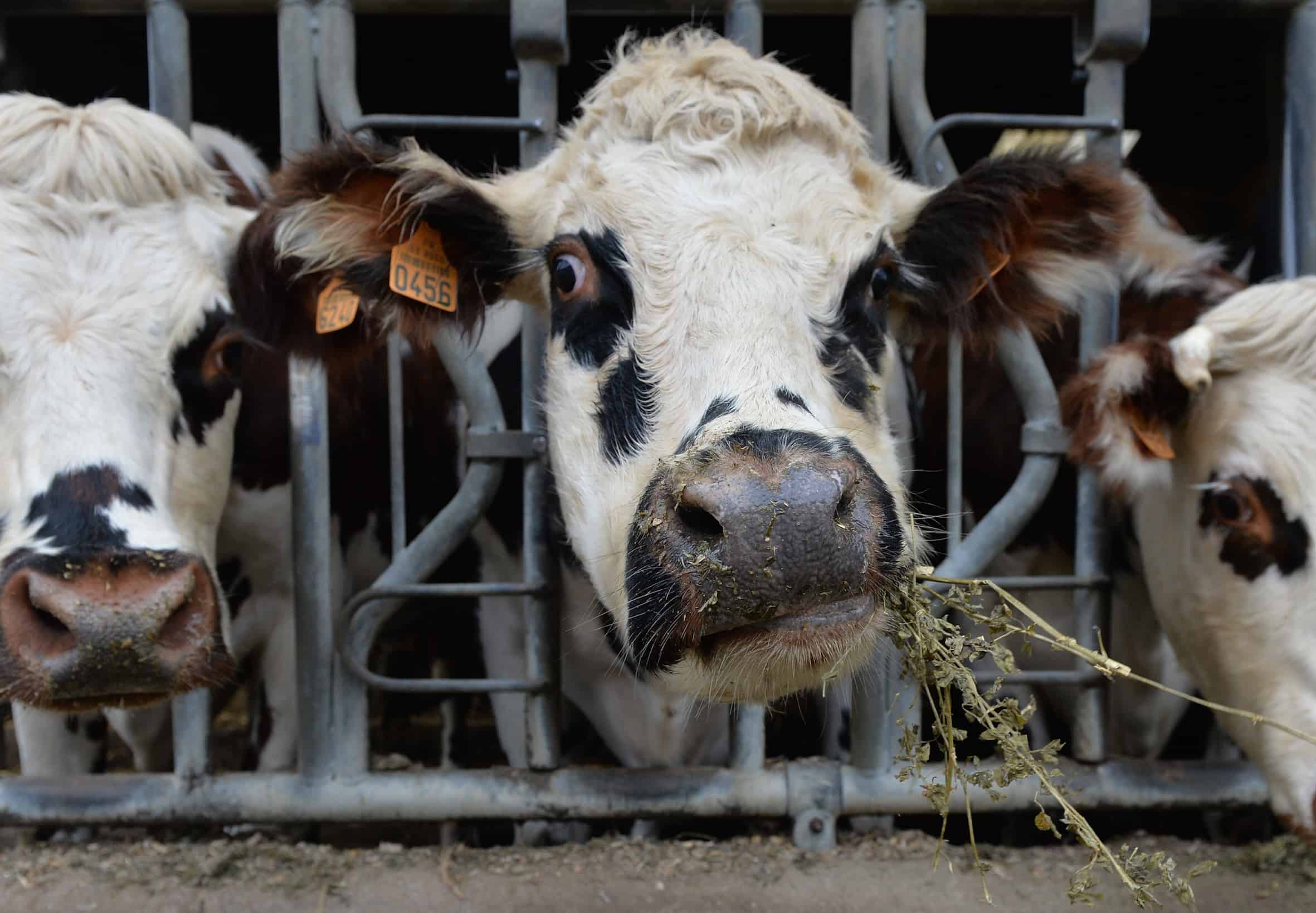 Normandy cows feed on alfalfa before milking on Oct. 23, 2015 at a farm in Courcité, northwestern France. At her farm nestled in the green hills of northwestern France, Marie-Francoise Brizard is helping to curb a planet-wide menace: farting and belching cows implicated in global warming. (Jean-Francois Monier/AFP)

COURCITÉ, France — At her farm nestled in the green hills of northwestern France, Marie-Francoise Brizard is helping to curb a planet-wide menace: farting and belching cows implicated in global warming.

So far this year, Brizard says she has cut methane emissions from her herd of 40 Normandy cows that are equivalent to 32 tons of climate-changing carbon dioxide.

That is equal to the carbon pollution spewed out in a 470,000-kilometer (292,000-mile) car journey, according to a computer tracker provided to Brizard by a French initiative that promotes lower methane output from farms.

She does it by feeding the cattle more grass but less maize and soy, cutting down on the cattle’s output of methane, which comes mostly from belching but also from flatulence.

Ruminant animals emit methane, a gas that is more than 20 times more efficient than carbon dioxide in trapping the sun’s heat.

Agriculture contributes an estimated 20 percent of global greenhouse gas emissions, which the world’s governments hope to curb in a climate pact to be negotiated in a November 30-January 11 conference in Paris.

As his wife leads the cattle to milking at the 100-hectare (250-acre) farm in Mayenne, a district of the Pays de Loire region, Luc Brizard sets out to sow seeds: alfalfa and other fodder rich in proteins alternating with cereals.

Dried alfalfa allows the couple to feed the cattle in winter without recourse to industrial maize- and soy-based feed which makes up a fifth of the diet of an average herd in France. The cattle also get a small supplement of linseed grown on site.

Legumes such as alfalfa and oilseeds such as linseed and some beans enrich the milk with Omega-3 fatty acids, which are claimed to have health benefits for humans but which also suppress the bacteria that produce methane. The cows thus emit less of the gas.

Alfalfa crops, rich in nitrogen, help the couple to improve the quality of the soil while their fields lock away carbon.

“The story is almost too good. But it is based on a principle of stunning simplicity: cows are made to eat grass,” said agronomist Pierre Weil, joint founder of the “Bleu-Blanc-Coeur” (Blue-White-Heart) initiative, which promotes food products with higher levels of the valued Omega 3 protein.

The scheme has been certified as a bona fide method of lowering greenhouse gas emissions by the French national institute for agricultural research and by the U.N. Framework Convention on Climate Change.

Under a “business as usual” scenario of greenhouse gas emissions, average global temperatures are predicted to rise by about 4 degrees C (6.4 F) by the end of the century, leading to more droughts, deadly superstorms and higher seas, according the U.N.’s top science panel.

Methane emissions from cattle can be cut by as much as 65 percent depending on the feed, according to the French initiative, which aims for a more modest reduction of 20 percent so as to achieve the best balance between economic constraints, milk quality and animal health. Farmer Marie-Francoise says that although the Eco-Methane project hasn't brought any extra money to her family, they don't regret their decision to feed their cattle and soil naturally. Jean-Francois Monier/AFP

Every month, milk produced on the Brizard couple’s farm is analyzed to ensure it meets the Bleu Blanc Coeur standards. Savings in greenhouse gas emissions are tracked each month on their computer with an ‘Eco-Methane’ counter.

Not all the 600 French farmers in the Eco-Methane project go as far as the Brizards.

“A farmer who only uses maize can just add a bit of linseed. You don’t have to change everything,” Weil said.

Despite saving on feed purchases, however, the financial benefits are meager for the Brizard family.

Dairies in the area are not specialized in collecting Blue Blanc Coeur milk, which is available as a separate product in only a dozen dairies across France. So the dairies just pay the basic price and mix it with standard milk.

Despite the tons of greenhouse gas that are saved, the farm does not receive any carbon credits either because there is too little demand from businesses or cooperatives to offset their greenhouse gas emissions. Only a dozen farms in the Eco-Methane initiative get extra money this way, though Weil says such contracts may be signed soon with a group of local rural district authorities.

The couple and their four children, hard hit by a slide in milk prices, thus live on the sale of beef, which is also rich in Omega-3 proteins.

But they are not regretting their decision to feed their cattle and soil naturally.

Marie-Francoise’s father, who started out as a battery hen farmer, moved to organic farming in the 1970s.

“One day he told us: ‘I don’t want to sell to others what I would not give to my own children.’ I was 12, that shaped me,” she remembered.