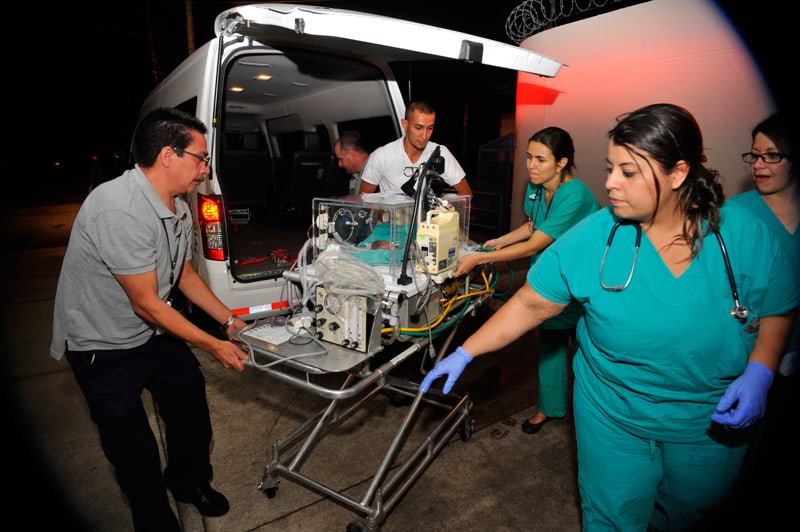 One of the sextuplets arrives at the Women's Hospital shortly after birth. ((Courtesy Diana Méndz and Gabriela Solís / La Nación))

Gabriel González, the youngest of Costa Rica’s first set of sextuplets, who were born prematurely in May, died Saturday night in San José’s Hospital de la Mujer. Gabriel is the fifth of the sextuplet siblings to die from complications.

Doctors told daily La Nación that Gabriel had been taken to the hospital last week to undergo surgery. After returning to neonatal care at the Hospital de la Mujer he caught a cold, which resulted in his sudden death.

The sextuplets’ mother, Silvia Villegas, had complications during the birth of her first child. She and her husband, Juan González, lost the child several hours after his birth. After that, Villegas had trouble getting pregnant so the couple turned to artificial insemination and fertility treatments for their most recent pregnancy. The couple did not rely on vitro fertilization, which is still illegal in Costa Rica due to court challenges.

The birth of so many babies at once put a strain on Costa Rica’s healthcare system. Not one medical facility in the country had the capacity to deal with so many premature babies at once, forcing the siblings to be delegated to different hospitals throughout the capital. The sextuplets’ birth spurred new guidelines from Costa Rica’s Human Fertility Commission. The guidelines are designed to decrease the chance of having multiple babies through artificial insemination to 10 percent.

Valentina, the only surviving sextuplet, left the hospital on August 10 after two months and 23 days in the hospital and remains at home.