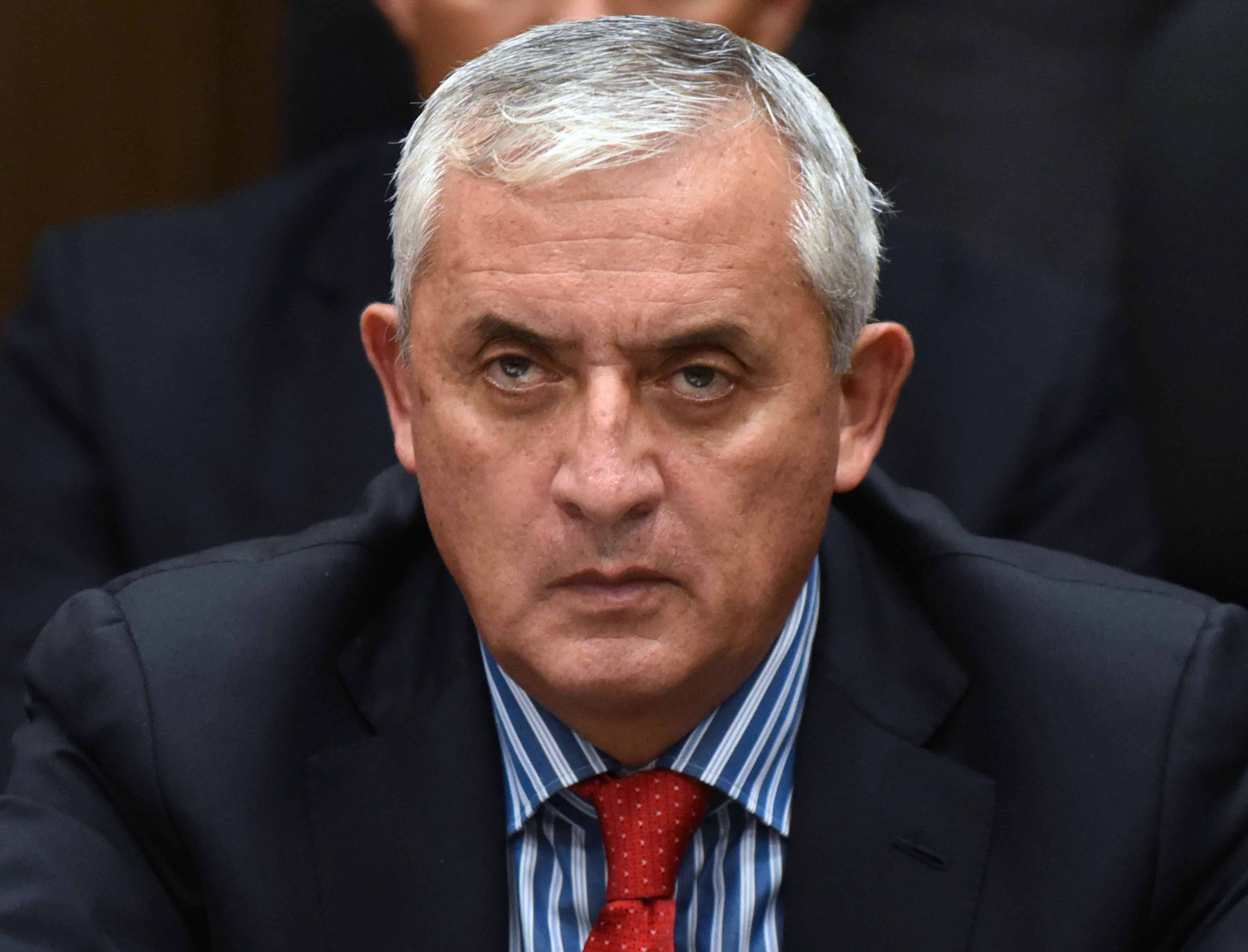 GUATEMALA CITY, Guatemala — Many Guatemalans and interested observers were glued Friday to live feeds of disgraced ex-President Otto Pérez Molina’s second appearance in court. The white-haired, hawk-nosed former general, who faces potential jail time for his alleged participation in a massive corruption scandal, appeared composed but refused to answer questions regarding the origin of his vast personal fortune and his ties to the ringleaders of the customs fraud network known as “La Línea.”

Pérez Molina stepped down on Sept. 2 after Guatemala’s Congress voted to strip him of his prosecutorial immunity and a criminal court issued a warrant for his arrest. He is accused of masterminding a huge customs fraud network in tandem with his former Vice President Roxana Baldetti.

Baldetti has been formally charged with customs fraud, illicit association and bribery and is currently under preventive detention in the Santa Teresa women’s prison in Guatemala City.

The embattled former president could suffer the same fate and his future looks increasingly grim after the court heard 15 wiretap recordings that allegedly prove his involvement in La Línea.

The recordings indicate that Pérez Molina had a close relationship with Salvador Estuardo González Álvarez, known as “Eco,” who was allegedly La Línea’s second in command. González, a publisher who owns two major Guatemalan newspapers, Siglo21 and Al Día, was arrested on April 16 along with several top government officials. He is currently in prison.

According to Guatemalan daily elPeriódico, González’s father, former Defense Minister Marco Antonio González Taracena, was Pérez Molina’s direct superior when the former president served in the intelligence wing of the presidency and helped Pérez Molina design his national security strategy after the latter was elected president in 2011.

A former Siglo21 reporter quoted by elPeriódico claims that after González took over the media conglomerate that owns Siglo21 and AlDía, in 2013, he pressured editors to publishing articles that cast Pérez Molina and Baldetti in a favorable light.

In addition, following Pérez Molina’s arrest another alleged member of La Línea, Giovanni Marroquín Navas, told the court that Pérez Molina attended a meeting organized by González to discuss a plan that was supposed to improve Guatemala’s tax collection services, which reported huge shortfalls throughout the Pérez Molina administration.

Pérez Molina blamed record-low tax collection on contraband and responded by sending the army to the country’s major customs offices in 2013, purportedly to stamp out corruption. However, after the fraud scandal was uncovered it became clear that the reason for the massive tax revenue shortfall was that La Línea was pocketing at least $328,000 per week.

The secret meetings at PP headquarters

A three-part investigation published by online news site Plaza Pública explains how the probe into La Línea was like pulling a single stray thread that unraveled an entire ball of yarn. The investigation, conducted by the U.N.-funded International Commission Against Impunity in Guatemala (CICIG) and the Guatemalan Public Prosecutor’s Office, began in May 2014 with an investigation into a Chinese importer named Miao Miao. His phone was tapped and he was overheard talking to another importer, who turned out to be Julio César Aldana — a key player in La Línea — about a tax evasion scheme.

Tapping Aldana’s phone and hacking into his email accounts led them to uncover the names of other members of the network as well as their meeting places. One of them was a clothing store called Boutique Emilio, owned by Luis Mendizábal, a businessman also linked to the bizarre 2009 murder of lawyer Rodrigo Rosenberg. Mendizábal is currently wanted by the police. Another meeting place was the headquarters of Pérez Molina’s Patriot Party (Partido Patriota, PP).

At a birthday party attended by members of La Línea on June 4, investigators spotted González, the publisher. Tapping his telephone led them to former Vice President Baldetti’s private secretary, Juan Carlos Monzón Rojas. Monzón disappeared on April 16 when the customs fraud scandal hit the headlines. He had been accompanying Baldetti on an official trip to South Korea. He is currently wanted by Interpol.

PHOTOS: A look back at how Guatemalan citizens demanded justice – and won

On Friday the court heard evidence intended to establish that Pérez Molina met with González at the PP’s headquarters on March 26. The evidence included wiretap recordings referring to someone as “the President,” “the big chief” (el mero mero) and “the owner of the finca.” Presidential security guards were also seen around the building during the alleged meeting.

Of all the recordings, perhaps the most incriminating is a conversation between former Vice President Baldetti and González on March 27. “Look, I was talking to the head of last night’s meeting and he was telling me about the figure you discussed,” Baldetti told the publishing magnate. “I don’t think the pres, Mr., Mr., the head of the company ought to pay for that,” she is heard saying.

Pérez Molina continued Friday to deny his participation in the fraud ring, but he failed to answer key questions about his relationship with La Línea’s leaders. In his defense, the former president said that when notorious Mexican drug lord Joaquín “El Chapo” Guzmán Loera was arrested in Guatemala in 1993, he unsuccessfully tried to bribe Pérez Molina with amounts that far exceeded the sums that the former president allegedly received from the customs fraud sceme.

Regarding the incriminating photographs, he said that “hundreds of thousands” of people that he’s never met have had their photograph taken with him. “On a personal level, I feel very said, not just because of all this [evidence of La Línea] but because of what I’m going through right now,” he said.

Prosecutors have frozen the former president’s assets and are investigating the origins of his personal wealth, which includes a $2 million farm located in the department of Chimaltenango, 60 kilometers west of Guatemala City. According to an investigation published by elPeriódico, some properties owned by Pérez Molina and Baldetti were purchased after the two were voted into office using a network of front businesses owned by Monzón, Baldetti’s former private secretary.

In the only interview that Pérez Molina has given to the press since he stepped down, he told the AP that the investigation was based on “hearsay,” not solid evidence. He also said prosecutors were trying to “boost their egos.”

Unlike Baldetti, who has been known for her histrionics since being implicated in the fraud case, (she wrote the Lord’s Prayer over and over again in her notebook during one court appearance), Pérez Molina appeared tired but composed during Friday’s hearing. At times he glared intensely at prosecutors.

Pérez Molina’s defense attorneys are César Calderón and Moisés Galindo, both of whom have defended former government and military leaders accused of wrongdoing. Calderón defended Mauricio Rodríguez Sánchez, former head of intelligence under dictator Efraín Ríos Montt (1982-1983), during his first trial for genocide in 2013. (Rodríguez was acquitted but he and Ríos Montt are now facing a retrial).

Galindo has defended a long list of retired army officers, including Byron Lima Oliva, who was convicted of the 1998 murder of Bishop Juan Gerardi.

Pérez Molina’s next court appearance is scheduled for Sept. 8, two days after the general elections. Since he is in custody, the former president will not be allowed to vote.

Recommended: How Guatemala’s Otto Pérez Molina fell from grace and what it means for upcoming elections