Presidential downfall: How Guatemala’s Otto Pérez Molina fell from grace and what it means for upcoming elections 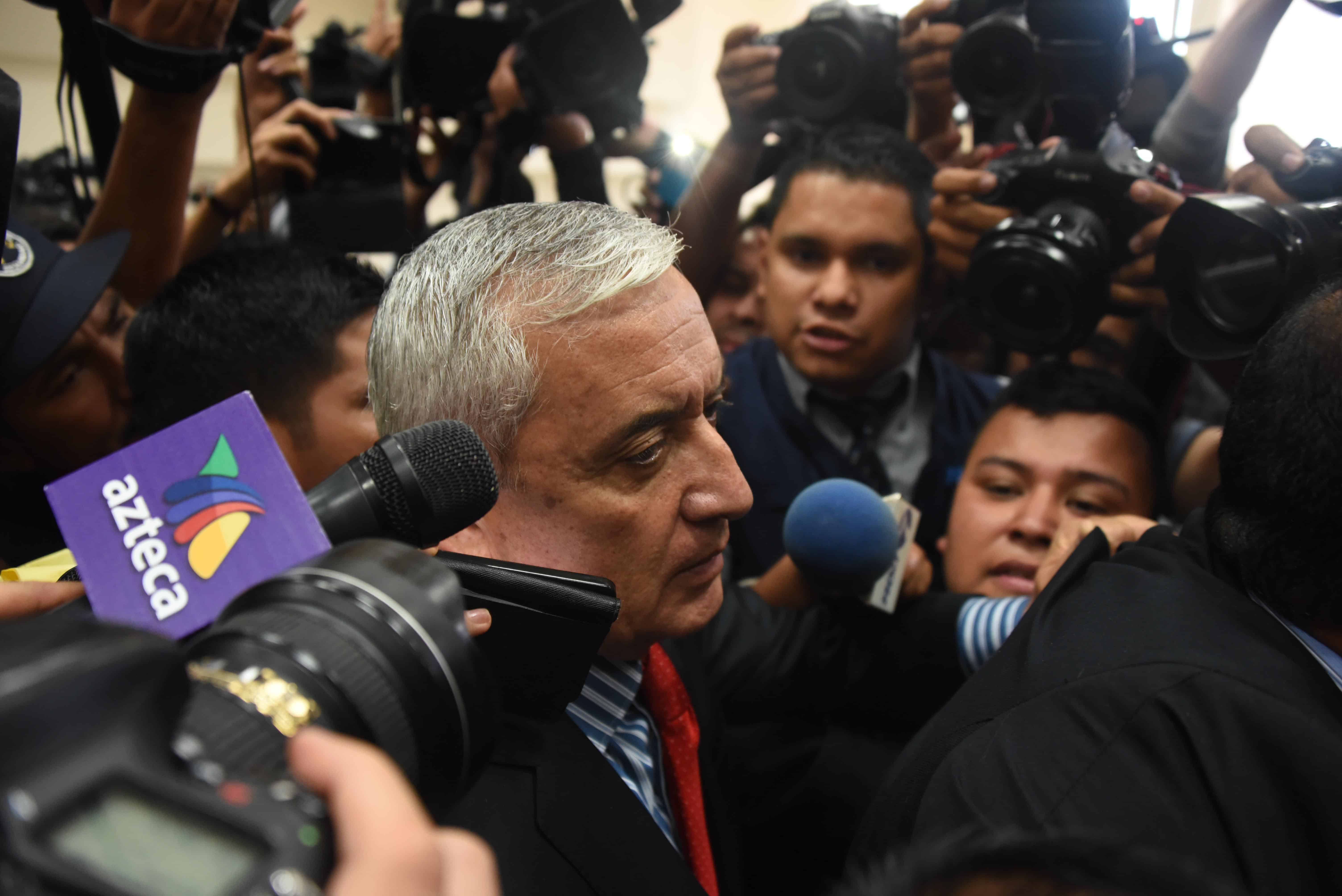 Otto Pérez Molina arrives at the Tribunal of Justice in Guatemala City, on Sept. 3, 2015 to face corruption charges. (Johan Ordóñez/AFP)

A Guatemalan judge on Thursday afternoon ordered ex-President Otto Pérez Molina held in provisional prison pending the continuance of a criminal hearing on Friday at 9 a.m.

Judge Miguel Ángel Gálvez said Pérez Molina should remain in the Matamoros military prison in Guatemala City because the ex-president is considered a flight risk ahead of his pending corruption trial. Read more here.

GUATEMALA CITY – The faces of jubilant protesters erupting into cheers outside the Guatemalan Congress on Tuesday afternoon has become an iconic image for a Central American country’s extraordinary crusade against corruption.

Under intense pressure from civil society, a majority of Guatemalan lawmakers voted that day in favor of stripping then-President Otto Pérez Molina of his prosecutorial immunity so that he could be tried for corruption. On Wednesday evening, a judge issued a warrant for his arrest. The same night, dramatically, and just three days away from elections to choose his successor, Pérez Molina sent his resignation to Congress just before midnight.

On Thursday morning, he sat before a court in the first hearing of a far-reaching graft probe that has already landed his former vice president in jail.

Lawmakers met Thursday morning to officially accept Pérez Molina’s resignation, and as this story goes to print, they were expected to convene an emergency session to swear in Vice President Alejandro Maldonado, who will hold power until an elected successor takes office on Jan. 14. Maldonado, a 79-year-old lawyer and former Constitutional Court judge, only assumed the vice presidency in May, the AFP reported.

Exasperated Guatemalans fed up with corruption erupted in celebration outside the Supreme Court early Thursday on the news of Pérez Molina’s resignation.

“Otto, you thief, you’re going to Pavón!” they chanted, referring to one of the country’s main prisons. Guatemalans celebrate in the streets after then-President Otto Pérez Molina was stripped of his immunity. Orlando Sierra/AFP

History in the making

Pérez Molina, 64, has been accused of masterminding a massive customs fraud network known as “La Línea” in tandem with his former Vice President Roxana Baldetti, who has been formally charged for corruption and is awaiting trial.

At mid-afternoon on Tuesday, tensions were rising outside Congress as anti-government protesters clashed with members of one of the only two labor unions that had continued to support the embattled ex-president.

In a desperate attempt to delay the inevitable and prevent lawmakers from voting on whether or not to strip Pérez Molina of his prosecutorial immunity, the president’s last remaining loyalists blocked the entrance to the building. Some used children as human shields in order to prevent the police from forcibly removing them.

Anti-government protesters branded them as acarreados, a term used to describe impoverished voters in marginal urban and rural areas who are herded like cattle to the polls in exchange for a meal or a bag of fertilizer.

When legislators began to arrive that day, protesters formed a human wall to allow them to enter the building, chanting “105 votes for Otto to be ousted!” The number 105 referred to two-thirds of the legislature, the minimum number of votes needed for Pérez Molina to have lost his immunity. Guatemalan lawmakers before voting to strip Otto Pérez Molina of his immunity from prosecution on Sept. 1, 2015. Johan Ordóñez/AFP

A white rose for peace

Some protesters gave each lawmaker a white rose symbolizing peace and transparency as they entered the legislative chamber.

It was the second time in three months that Pérez Molina had faced impeachment proceedings in Congress. The first attempt was thwarted after Pérez Molina’s dwindling Patriot Party negotiated a deal with Líder, the country’s main opposition party, which further outraged protesters.

But this time round, timing played a critical role. Four days before Guatemala’s general elections, lawmakers could not afford to give Pérez Molina a pass, since many of them are seeking re-election. In the end, 132 legislators voted to strip Pérez Molina of his immunity, far exceeding the 105 votes needed.

Among them were members of the ex-president’s own party. David Jerez Escobar, an activist from Resistencia Ciudadana, one of the many protest groups that have sprung up since the La Línea scandal hit the headlines on April 16, told The Tico Times, “They had no other choice,” referring to the eight Patriot Party lawmakers who voted against their leader. “There was no way they could play the villains. What we are saying now is that this is our victory, not theirs.” Outside Congress, the crowd cheered as the votes were tallied, and as the rain began to fall, several protesters spread out a plastic sheet and shielded police officers from the downpour as a gesture of gratitude for deterring government loyalists from provoking violence. Others held umbrellas over the police officers. One woman thanked each one with a kiss on the cheek.

As the final vote was announced, protesters, following the events inside on the radio and through word of mouth, began singing the national anthem. Others exploded fireworks in the street. Then, despite the heavy rain, they celebrated in Guatemala City’s central square for hours.

Later, prosecutors banned Pérez Molina from leaving the country. Attempts by his attorneys to block the congressional vote were rejected by justices of the Constitutional Court, the country’s highest legal authority. The retired army general – whose rise and fall from political power spanned the past 15 years – had played his final remaining card and lost.

On Thursday morning, after clinging to power through months of unprecedented protests, Pérez Molina finally bowed out hours before a court hearing where he currently faces being remanded in custody — a decision that would have automatically removed him from office under Guatemalan law, according to the AFP. With practically every candidate on the electoral ballot now tainted by corruption allegations, the discontent of voters continues to grow by the day, and a record-low turnout is expected for Sunday’s general election.

Some believe political motives contributed to Pérez Molina’s downfall: “It was obviously a strategy to divert attention towards Pérez Molina and away from the elections,” said Jerez Escobar. “The message was that everything is OK, and the system works – it doesn’t. The struggle continues and this is just a step.”

Líder candidate Manuel Baldizón led the polls before Thursday’s events, but his popularity has fallen dramatically since the U.N.– supported International Commission Against Impunity in Guatemala (CICIG) revealed in July that his running-mate, Edgar Barquín, allegedly was involved in a massive money laundering operation while president of the central bank. Although Baldetti and Pérez Molina have been the main targets of Guatemala’s anti-corruption demonstrations, protesters have also carried images of Baldizón with a pirate’s eye patch, and many believe his administration would be as corrupt as Pérez Molina’s.

On Aug. 7, electoral authorities banned Baldizón’s Líder party from further campaigning, because it had exceeded the $6.7 million spending limit allowed under Guatemalan law. Líder disregarded that ban and continued campaigning.

Last weekend, Baldizón’s detractors were further angered after an audio recording was leaked to the media in which he urged mayoral candidates to mortgage their homes and vehicles to shuttle as many poor voters as possible to the polls. In this country of 15 million, 53.7 percent of Guatemalans live in poverty.

And in a derogatory reference to demonstrators who have taken to the streets week after week since April, he said, “Let them continue arguing and doing their thing in the square. We could fill 50 squares if we wanted to. But we’re not going to fall into that temptation, we’re going to remain firm, and as I’ve said in each of my speeches, we have a powerful weapon of war called the vote. We’re going to use votes to kick their ass.”

Baldizón is competing with comedian Jimmy Morales, of the tiny National Convergence Front party, or FCN, who has proven to be the dark horse in the race and has benefitted from his status as a newcomer to the political sphere. But while he has risen in the polls thanks to his popularity among urban, middle-class voters, analysts say he lacks the necessary resources to mobilize supporters.

However, a poll published Thursday found that Morales could now be the leading candidate, AFP reported. The poll gave Morales 25 percent support, ahead of Baldizón (22.9 percent), and Sandra Torres (18.4 percent). The three candidates will likely battle it out for the two spots in a runoff on Oct. 25. Guatemalan ex-President Otto Pérez Molina gestures during a hearing at the Tribunal of Justice in Guatemala City, on Sept. 3, 2015. Johan Ordóñez/AFP

National Unity of Hope (UNE) candidate Sandra Torres, former first lady to Álvaro Colom (2008-2012), has dropped to third place in the polls and has been dogged by another CICIG investigation into the alleged involvement of her sister, Gloria Torres, in money laundering.

The climate in Guatemala is jubilant but tense heading into Sunday’s elections, which will also choose the members of the 158-seat legislature and 338 mayors. The U.N. warned Wednesday there was a risk of violent protests on voting day.

Rights groups have reported cases of political party activists attacking protesters, and some 10 candidates were murdered between March and August.

Citing the candidates’ apparent disregard for the law, many Guatemalans now are calling for the elections to be postponed until Congress can pass far-reaching electoral reform, which would, among other things, give electoral authorities the power to enforce sanctions.

Those who oppose the elections moving forward have created a website, NoQueremosElecciones.org, or “We don’t want elections.” They also have uploaded a series of videos on YouTube under the title “Why we won’t vote.”

And on Tuesday, several electoral volunteers resigned, refusing to help count the votes.

“The elections that will be held are illegitimate,” Eleonora Montenegro, one of the volunteers, told local news site Diario Digital. “We realized that these elections are a sham and are being funded by dirty money.”

According to CICIG, 25 percent of the money fueling Guatemalan politics comes from criminal organizations, particularly drug trafficking. At least 10 mayoral and congressional candidates have proven ties to organized crime.

Those who do decide to vote if the election moves forward will do so amid the country’s deepest political crisis in recent history, where every day seems to bring yet another mind-boggling headline from the Land of the Eternal Spring.

Henry Morales and Katell Abiven of AFP contributed to this report.