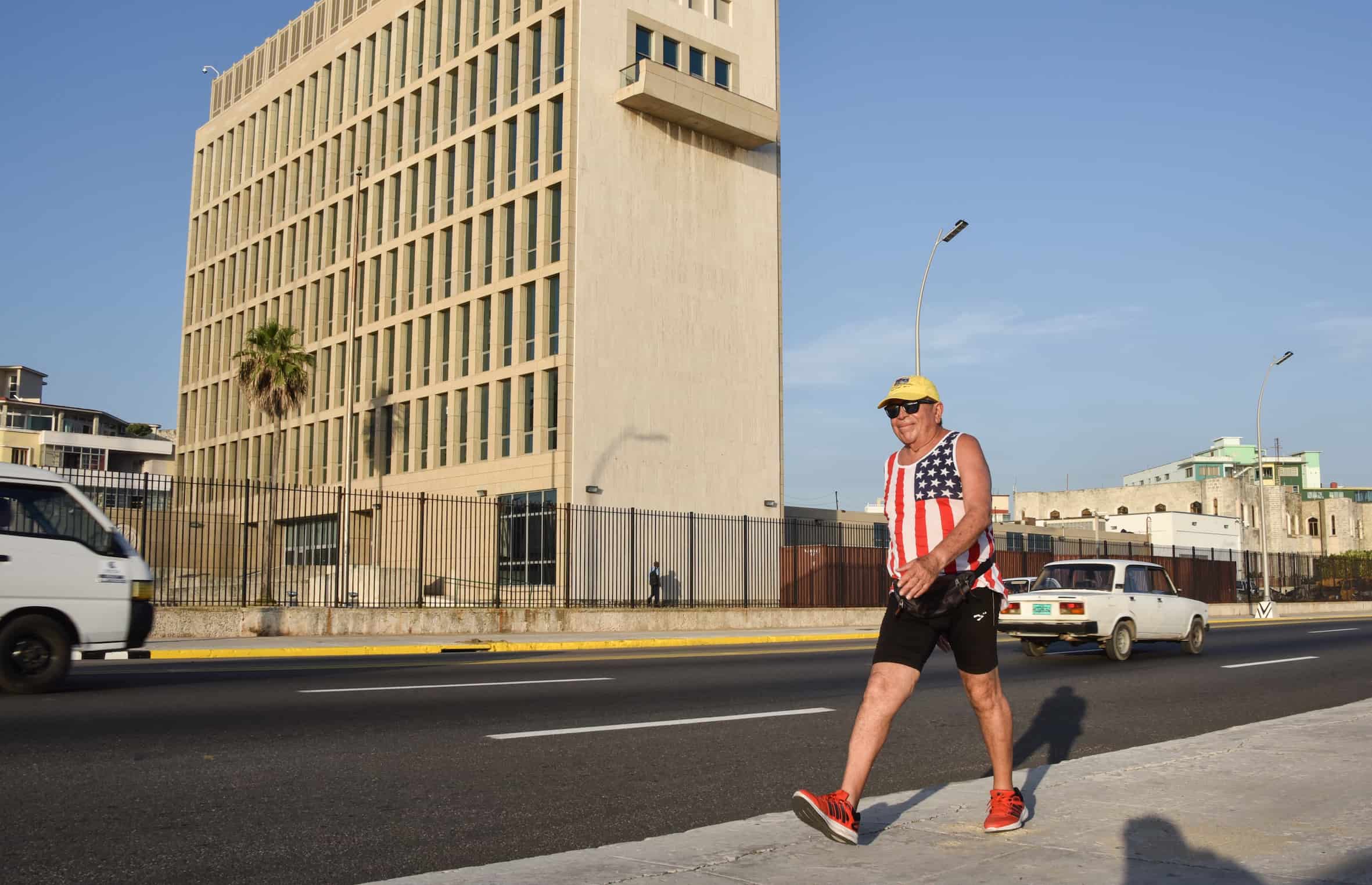 A man wearing a sleeveless shirt with the U.S. flag walks along the Malecón seafront near the U.S. Embassy, on July 20, 2015. (Adalberto Roque/AFP)

HAVANA, Cuba — In nations all over the world where the United States has an embassy, U.S. diplomats promote trade and assist American companies looking to make business contacts.

And now, the United States has an embassy in Cuba. But it also has a trade embargo against the island.

That puts U.S. officials in Havana on an uncharted and complex new course. The United States and Cuba have normal diplomatic relations once more, but their economic and political relations are anything but.

Although most forms of U.S. trade are still banned under the 54-year-old embargo, a limited but growing number of American firms, such as food exporters and technology companies, are eligible to do business here. The online vacation rental site Airbnb has added more than 2,000 Cuban listings this year. Ferry companies and cruise ship operators are lining up to storm Cuba’s ports. A few consumers on the island are signing up for Netflix.

But some U.S. companies that would be otherwise eligible under President Barack Obama’s loosening restrictions still face daunting American regulatory obstacles — not to mention an opaque, state-run economy in Cuba that is no place for novices.

“As a small-business exporter to Cuba, I would like to work with embassy staff who could help navigate the commercial challenges within Cuba,” said Paul Johnson, president of Chicago Foods International and the co-chair of the U.S. Agriculture Coalition for Cuba, an anti-embargo group.

PHOTOS: Cuba as it was – A glimpse of life before the US arrives

Johnson and others say they’re seeking guidance on regulatory compliance as well as networking help. The U.S. Embassy can do that in Cuba, at least in theory.

But practices such as contacting Cuban state firms on behalf of U.S. companies are still foreign territory for American officials.

“We haven’t engaged here in Cuba on a commercial level in a very long time,” said a senior U.S. official, speaking on the condition of anonymity because of the sensitive nature of U.S. diplomacy in Cuba. “But we certainly want to be helpful for Americans who come down here and are looking around.”

Still, the official cautioned, “We’re at the beginning of this.”

Obama has called on Congress to lift the embargo, arguing that expanded trade and travel by U.S. citizens will do more to change the island’s one-party communist system than punitive sanctions.

The large U.S. diplomatic compound along Havana’s seafront boulevard — completed in 1953 — formally returned to being a full-fledged embassy on July 20, more than a half-century after relations were severed.

But other aspects of making the embassy operate like U.S. diplomatic missions elsewhere in the world will take time, officials say.

One of the most sensitive issues involves Washington’s support for opponents of the Castro government’s communist system. Cuba vociferously objects to U.S. democracy promotion, which it considers “subversion.” U.S. diplomats say they will continue to stand up for human rights and “universal values” in Cuba but concede that some U.S. programs could change as the embassy’s role evolves.

There are no specific plans to alter them, the senior official said, but “the programs are always under review.”

An early test will come Aug. 14, when Secretary of State John F. Kerry arrives for a ceremony to raise the U.S. flag over the embassy. The U.S. official could not confirm whether Cuban dissidents will be invited to attend. Cuban government officials have been invited, but they typically boycott diplomatic functions in which Castro opponents are present.

American diplomats say one of the biggest changes in their role will take place outside the embassy, as they are able to travel much more freely around the island. They will be required to notify the Cuban government of their plans but do not require permission to visit areas outside Havana, an arrangement they abide by elsewhere in countries that impose “restrictive” conditions.

U.S. officials are also making plans to expand consular services for Americans in Cuba, as more and more U.S. travelers arrive. A new initiative in Congress is seeking to lift U.S. travel restrictions, an event that would dramatically increase the need for U.S. consular services on the island. Currently, visits are restricted to travelers who have family in Cuba, or who travel with licensed “people-to-people” groups and other forms of “purposeful” travel.

One possibility is that the United States would reopen a consulate in Santiago de Cuba, Cuba’s second-largest city, on the eastern end of the island.

With some 300 Cuban employees and about 50 American staff personnel, the U.S. compound in Havana is the largest diplomatic mission in the country. As a result of the upgrade to embassy status, the United States is planning to send an additional 25 U.S. officers, but the senior U.S. official said that number could increase if federal agencies such as the FBI, the Commerce Department and the Drug Enforcement Administration place attaches in the embassy, as they do in other countries.

The embassy building would be large enough to accommodate them, for the time being. “We have room to grow,” the U.S. official said.

Cuba held a flag-raising ceremony to reopen its embassy in Washington on July 20.

More quietly, it has sent a commercial attache to its embassy, a move that Johnson, the Chicago food exporter, said has been “extremely helpful.” The attache is expected to focus on identifying business opportunities and promoting participation of U.S. firms in Cuban trade fairs and events, with the goal of boosting support for an end to the U.S. sanctions.

“It has opened up a new channel to discuss commercial projects, which can then be navigated through the Cuban system,” he said. “It would be great to see that happen on the U.S. side as well.”

In spite of the diplomatic thaw, trade between the United States and Cuba has been shrinking in recent years.

Johnson said his company has been selling food to Cuba since 2009, averaging more than $1 million in gross annual sales, but business has fallen off “precipitously” in the past 18 months. U.S. sanctions don’t allow exports to Cuba on credit, and Johnson said he and other U.S. firms are losing out to foreign competitors who can offer financing.

In 2008, Cuba imported more than $700 million worth of U.S. goods, mostly foodstuffs, but that number has declined since then and is projected to fall to $166 million this year, according to the New York-based U.S.-Cuba Trade and Economic Council.

Read more stories about the U.S.-Cuba thaw from The Tico Times