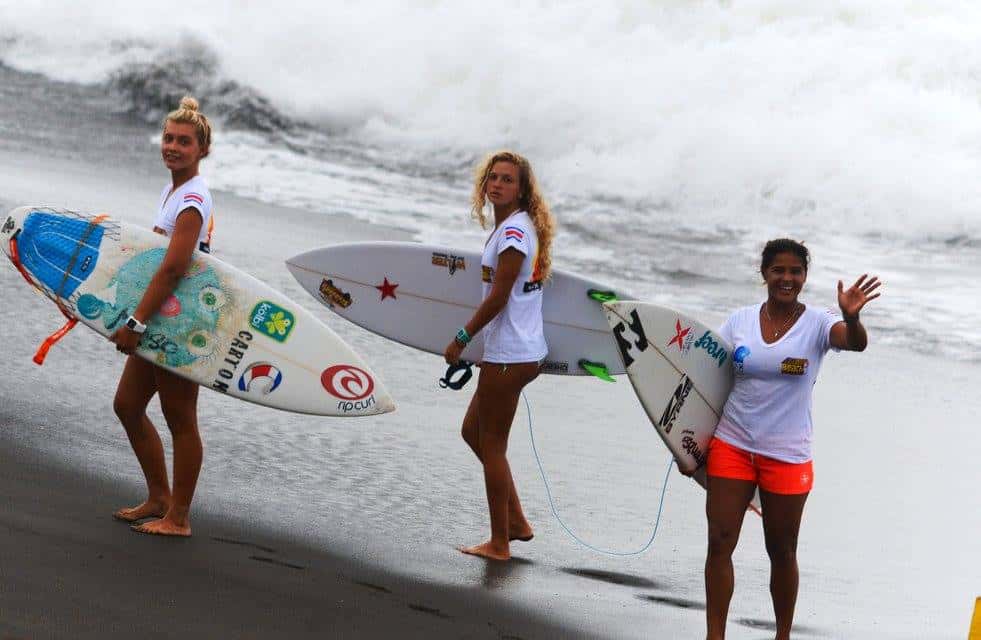 It’s been a long time coming, but after 10 years competing on the Costa Rican national surf circuit, Jason Torres has claimed his first national championship. And it was a nailbiter for the surfer from Jacó at the Reef Gran Finals in Playa Hermosa this weekend.

Although he surfed extremely well during his heats, he fell out of the contest in the semi-finals, leaving his fate in the hands of those surfers who made the open finals. These included Carlos and Alberto Múñoz of Esterillos, Jair Pérez of Jacó and Isaac Vega of Tamarindo.

For most of the heat, Pérez dominated: boom, boom, boom, wave after wave, sharp snaps. With little more than a couple of passing waves from each of the other guys, what seemed to be a less-than-spectacular end to a very exciting weekend of competition changed entirely. Carlos Múñoz came from way behind at 3rd to earn a nearly perfect score on a long right and a seemingly endless series of maneuvers within the final two minutes. Adding tension was the fact that Pérez maneuvered a barrel just after that, at the very end of the time.

Torres joined Carlos Múñoz — then in 1st place — while Pérez and Alberto Múñoz waited for the final score from the judges’ booth. The overall championship would be determined by the best five scores gleaned from the other events on the circuit this year. Torres, ranked No. 1 coming into the Grand Finals, needed Alberto to fall to 3rd or 4th in this heat. Winning the event would be a great accomplishment but not enough to win the national crown.

Then Pérez got his score, enough to stay in 2nd place, with Alberto Múñoz in 3rd and Vega in 4th. When all the mathematics were computed, Torres breathed a sign of relief — and joy.

“This all started last year when I asked my sponsor if I could do the QS (World Surf League Qualifying Series),” Torres explained after receiving his trophy. “They said to stay in Costa Rica and try and win the national title, then they’d see what the future would be. That was the extra motivation to have this title fight.”

“This win is so important to me, I worked so hard for this,” he added. “Thank God for giving me this title, and thanks to my family for supporting me while I did this. I now know I belong on the QS and I want to be there.”

Meanwhile, Lisbeth Vindas of Jacó continued to make history with a 12th national women’s open championship, an astonishing feat. This season, with international superstar Leilani McGonagle of Pavones nipping at her toes at every date, the veteran still managed to maintain her pinnacle position, but not easily. Of this she was acutely aware.

“I’m really happy, but super tired. I did a lot of paddling in this strong current,” Vindas said. “Leilani had such a good left, and I was a little worried. I pulled it out. You know, it was good today and it’s been good for all these years. Today was very important to me because it was the 20th anniversary of my surfing. So it was a very special fight today.”

Next year, Vindas will turn 35, making her eligible for the women’s masters competition on a different circuit. But fans shouldn’t worry, she still plans to make a go at her 13th title on the Kölbi National Surf Circuit when it starts up again in 2016.

McGonagle’s performance earned her a 3rd junior (17 and under) national title.

Leo Calvo became the male junior national champion, the latest win in his climb through the divisions from the time he was 10. The Boca Barranca surfer, who turned 18 at the contest, attributed his focus on winning the championship as key to his victory.

Aldo Chirinos of Playa Negra won the boys (15 and under) national title. Chirinos’ year was full of ups and downs, wins and losses. He even missed two contests, making his performance even more important at those dates he was able to attend.

“I’m really happy for everything, this is my first national title and it’s pretty exciting,” Chirinos said.

This weekend, the Costa Rica Surf Federation took into account that last year the large waves forced the cancellation of the mini-grommets (11 and under) finals and started the categories for the younger kids on the day before the bigger swell was set to arrive.

Malakai Martínez of Tamarindo didn’t need this concession. He’s adept in every size swell. Yet, he made quick work of the grommets (13 and under) category — and participated in boys and juniors, as well — winning the date and the national title.

“When I’m surfing I keep in mind the math, the scores of everyone and the time,” Martínez explained. “I take it step by step, heat by heat. I thank my parents for putting me in this sport, getting me to where I am, and, of course, getting me to the contests. This win was pretty much for them.”

With his five best scores factored together, 11-year-old Samuel Reidy was able to become the mini-grommets national champion, even though he only placed 3rd in Hermosa. Living part time in Dominical, he also spends a lot of time surfing the famous left in Pavones which the youngster thinks made for an easier win.

“I think I had an advantage here on lefts because I surf Pavones, and also because Dominical is a beach break like this one. It cannot get any better.”

When all was said and done and the trophies awarded, surf federation president Randall Chaves had a moment to reflect on the seven months and seven contests of the 2015 national surf circuit.

“The level of the kids is so high,” he said. “You have the mini-grommets doing cuts and airs now. The youngsters are now more competitive as they grow and climb from category to category.”