Football: Spain comes from behind to hand Costa Rica its third consecutive loss 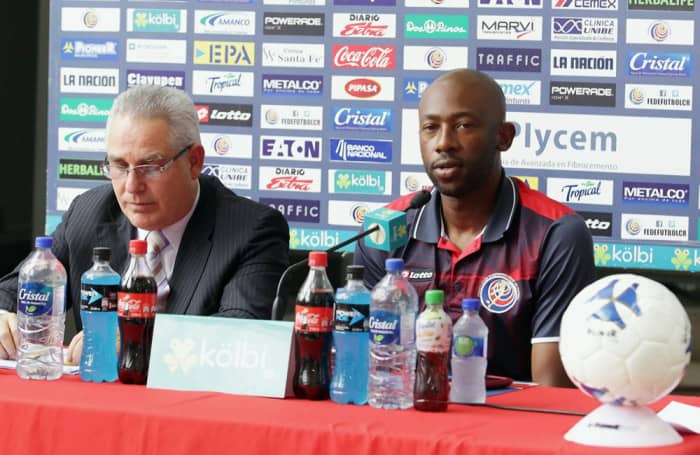 Coach Paulo Wanchope has yet to score a win as head coach of Costa Rica's men national team. (Courtesy of FEDEFUTBOL)

Suffering a disappointing 2-2 draw on Saturday’s men’s national team friendly in Orlando, Florida, Costa Rica’s “La Sele” made an early statement against Mexico only to follow it up with a whimper.

After a second-half breakdown, La Sele will move on to the CONCACAF Gold Cup 2015, from July 7 to 26 in the U.S., still in search of an identity similar to the one that catapulted the team through its last major tournament – the 2014 World Cup.

A record of 0-3-2 to begin 2015 leaves plenty of criticism hanging over new coach Paulo Wanchope, who has yet to recapture the magic his predecessor Jorge Luis Pinto was able to unleash with this team in Brazil.

And just as that cloud of doubts seemed to clear up on Saturday with a comfortable 2-0 halftime lead over Gold Cup favorite Mexico, lightning struck in the form of Mexico’s top two attackers. Giovani dos Santos and Javier “Chicharito” Hernández nabbed two goals within the first 10 minutes of the second half to even the score and make Costa Rica settle into a draw.

La Sele’s first half success against Mexico’s “El Tri” came from a trio of players who weren’t even on the 2014 World Cup roster. Forwards David Ramírez and Johan Venegas were the authors of Costa Rica’s two first half goals, while goalie Esteban Alvarado played an admirable match in place of injured star Keylor Navas.

During a pair of Mexican free kicks in the first half, the ball easily got past Costa Rica’s wall but La Sele remained unscathed thanks to saves from Alvarado. Leaks continuously sprouted in the back lines of both defenses, giving Alvarado and counterpart Guillermo Ochoa plenty of action in goal. Mexico converted on a late goal that would have given them the win, but an offside flag kept it at a draw.

Though Wanchope’s side missed an opportunity to garner momentum before the upcoming tournament, the friendly did serve as an exciting preview of a potential Gold Cup final. Both Mexico and the United States are listed as favorites, while Costa Rica is expected to finish third, according to oddsmakers.

The effort to beat out both Mexico and the U.S. will be more challenging considering the litany of injuries Wanchope has had to deal with in constructing this roster. Not only is Navas sidelined with an Achilles tendon injury, but other key pieces like Yeltsin Tejeda, Bryan Oviedo, and Óscar Duarte are also expected to miss the Gold Cup due to ailments of their own.