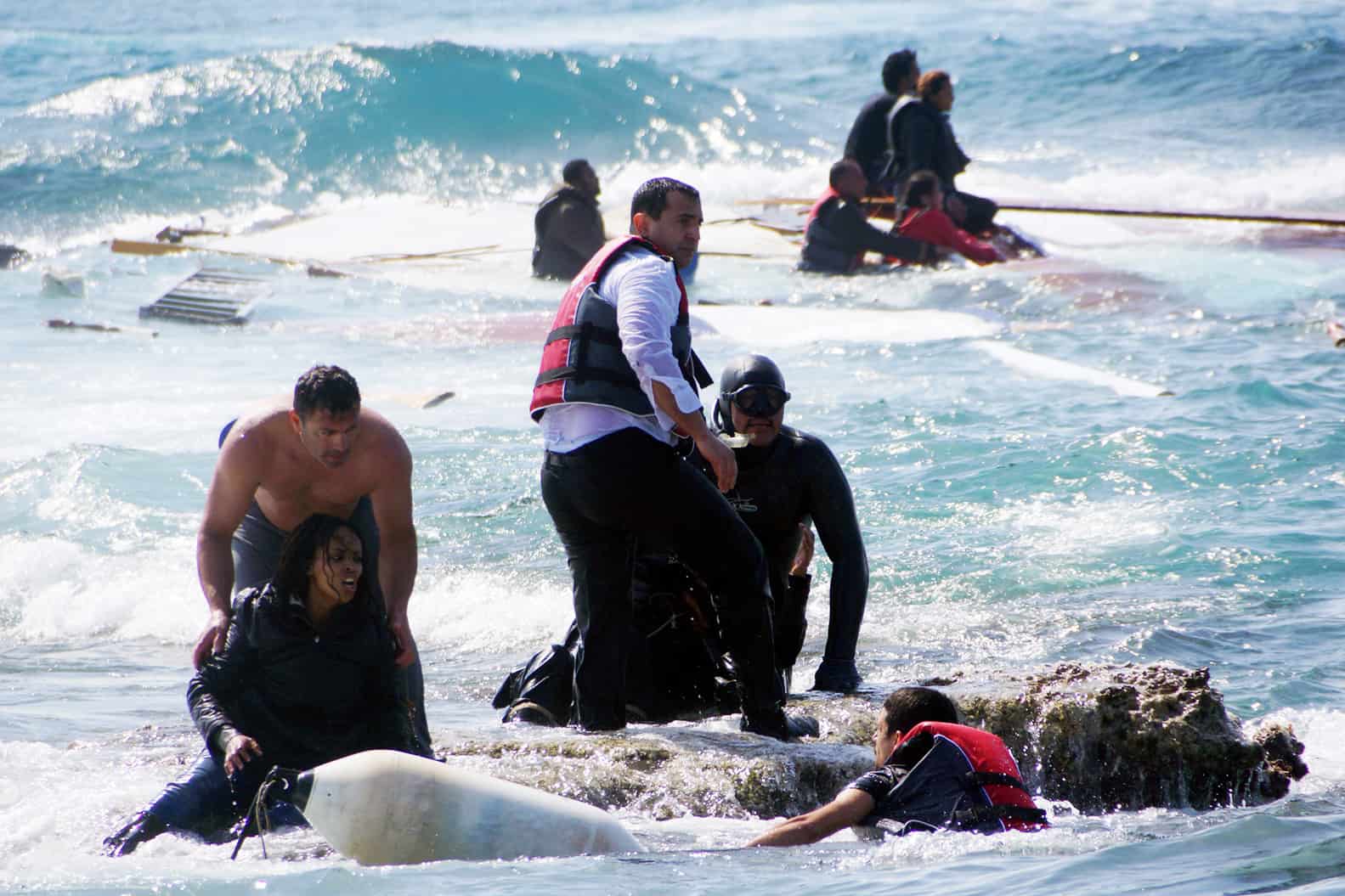 Local residents and rescue workers help a migrant woman after a boat carrying migrants sank off the island of Rhodes, southeastern Greece, on April 20, 2015. (Argiris Mantikos/AFP/Eurokinissi)

LUXEMBOURG, Luxembourg — E.U. foreign affairs chief Federica Mogherini told member states Monday they had “no more excuses” not to act on the Mediterranean migrant crisis as reports came through of another boat sinking with 300 people on board.

More than 700 people were feared dead after a fishing boat crammed with migrants seeking a better life in Europe capsized off Libya on Sunday, with some survivors suggesting nearly 1,000 could have been on board.

As E.U. foreign and interiors met to discuss their response to the worsening crisis, the International Organization for Migration said it had received a distress call from another boat in the Mediterranean carrying more than 300 people, with at least 20 reported dead.

“The caller said that there are over 300 people on his boat and it is already sinking (and) he has already reported fatalities, 20 at least,” the IOM’s Federico Soda wrote in an email.

Soda said the IOM had given the Italian coast guard the coordinates for that and two other distressed vessels, but that they were still tied up with the earlier shipwreck.

“We need immediate action from the E.U. and the member states,” she added.

Italian and Maltese navy boats continued to scour waters off Libya for the victims of Sunday’s disaster — the latest in a string of shipwrecks, which have claimed well over 1,000 lives since the start of 2015. But the outlook appeared grim, with only 28 survivors rescued so far, along with 24 bodies.

One survivor told Italian authorities that there were as many as 950 people on board and that some of them had been locked below deck by the smugglers.

The mass drowning, believed to be the deadliest in the Mediterranean, caused an outcry across Europe, where newspapers called it the “E.U.’s darkest day.”

“European leaders knew full well that the number of victims at sea from African migration would smash records from the spring,” Belgium daily Le Soir wrote.

Chancellor Angela Merkel of Germany, which is the top destination in Europe for migrants, said she was “appalled” by the disaster, calling it “not worthy of Europe.”

“A continent which feels committed to humanity must look for answers even when there are no easy answers,” her spokesman quoted her as saying.

Refugee and rights bodies demanded European governments beef up maritime rescue operations and address the underlying causes of the flood of asylum-seekers and migrants washing up on Europe’s shores.

Malta’s Prime Minister Joseph Muscat urged the E.U. to address the chaos in war-torn Libya, which people smugglers have made the main launching pad for overloaded rickety boats.

“We have what is fast becoming a failed state on our doorsteps and criminal gangs are enjoying a heyday,” he said.

Britain and France led the international coalition that paved the way for the ouster of longtime dictator Moammer Khadafi in a 2011 uprising. Since then Libya has been torn between rival factions fighting it out for control of the oil-rich state.

Mogherini, a former Italian foreign minister, has been pushing the E.U. to be more pro-active on Libya. Just as the Islamist attacks in Paris in January had generated a common response, so this incident should give momentum to finding a common migration policy, she said.

“The main issue here is to build a common sense of European responsibility, knowing that there is no easy solution,” she added.

Some 11,000 migrants have been rescued since the middle of last week alone and current trends suggest last year’s total of 170,000 landing in Italy is likely to be exceeded in 2015. The issue of who handles these migrants — for asylum or repatriation — is hugely sensitive, with Italy complaining that its E.U. partners are not doing enough.

Rome scaled back its Mare Nostrum search-and-rescue operation at the end of last year in protest over its rising cost and it was replaced by a smaller E.U.-led mission called Triton. The recent flood of migrants and the growing loss of life has questioned Triton’s effectiveness but some E.U. member states, especially those not directly affected by the arrivals, have been reluctant to do more.

Sunday’s disaster could change that.

German Foreign Minister Frank-Walter Steinmeier said the scale of the loss of life meant Europe “cannot go back to normal” and called for “an open discussion without taboos” on a common E.U. policy.

The fishing boat capsized most likely as a result of terrified passengers rushing to one side in desperation to get off after coastal authorities in Italy and Malta picked up a distress signal around midnight Saturday, when it was still in Libyan waters.

The deadliest incident prior to Sunday occurred off Malta in September 2014, when an estimated 500 migrants drowned after traffickers deliberately rammed their boat in an attempt to force the people onboard onto a smaller vessel.