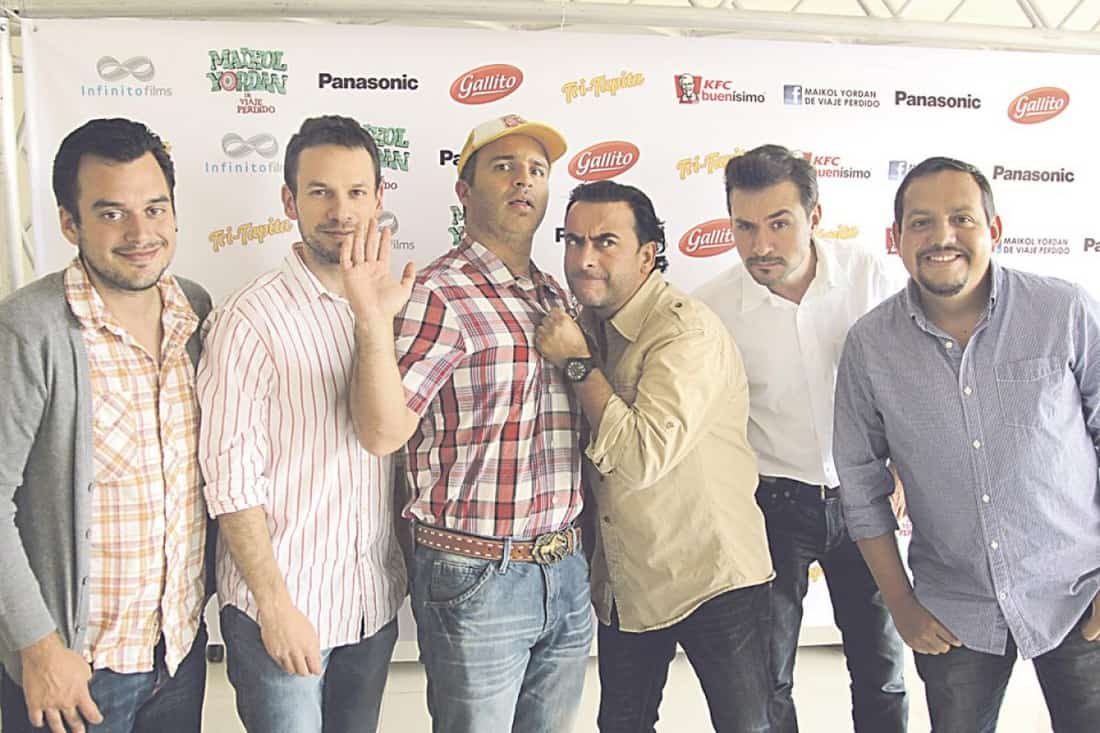 The cast of “Maikol Yordan” pose, with the titular protagonist getting manhandled in the middle. ((Courtesy of La Media Docena))

You can’t drive down a highway or visit a local movie theater without seeing a poster for “Maikol Yordan de Viaje Perdido.” If you’re already a fan of the hit Costa Rican comedy series “La Media Docena,” you have probably been looking forward to their first feature film for a solid decade.

But if you have no idea who Maikol Yordan is, you’ve never heard of “La Media Docena,” and the poster has bewildered you since the film premiered last December, you probably have a few questions – and there is no better time to ask, because this week “Maikol Yordan” just became the most-attended film in Costa Rican history.

Let us clarify that: It’s not the most-attended Costa Rican film in Costa Rican history. It’s the most-attended film, period. You remember those humble Hollywood blockbusters like “Avatar” and “The Avengers”? They’ve been beaten. “Maikol Yordan” even sank “Titanic.” More than 500,000 people have bought tickets for the film so far – about one-tenth of Costa Rica’s entire population.

(Although keep in mind that the most-attended film in Costa Rican history used to be “Ice Age 4.” Quality doesn’t always equal quantity.)

So what’s the deal? Here’s some background.

What is “La Media Docena”?

Literally translated as “Half a Dozen,” “La Media Docena” is a sketch comedy show that airs regularly on Teletica. Unlike live sketch programs like “Saturday Night Live,” the show’s scenes are shot on-location in all kinds of random places, such as airplanes, restaurants, and San José streets. If your first language is English, the show is best described as the Costa Rican “Monty Python.” If you grew up in Latin America, the show is largely inspired by the Argentinian music-comedy group, Les Luthiers. Indeed, the “Media Docena” collective has performed several live shows, including an homage to Les Luthiers.

No. According to creator Daniel Moreno, “Media Docena” has a canon of more than 1,000 sketches, and it is filmed on HD. The show has hosted a slew of prominent guest stars, including former president Laura Chinchilla – twice.

Who is Maikol Yordan?

Dressed in his yellow baseball cap and tucked plaid shirt, Maikol Yordan is a clueless campesino trying to get by in modern Costa Rica. By far the most popular of the “Media Docena” characters, Maikol Yordan spends his time toting a backpack and looking for a job, but he is foiled at every turn, usually through ridiculous misunderstandings.

Why is he named after the most famous basketball player of all time?

There is a common stereotype that small-town families often gives their newborns incredibly creative names. (One mythic example: A pair of Puntarenas parents allegedly saw a ship in the harbor and named their child “Usnavy.”) Some of these names come from famous celebrities. Part of the joke is that Maikol Yordan is clearly in his 30s, so he was born several years before the world knew the Chicago Bulls’ legendary shooting guard.

Wait, isn’t that the guy on all those KFC posters?

Yes. Maikol Yordan is so popular and recognizable that the U.S. fast-food giant bought the rights to use him in their ads.

What is the movie about?

The dignified translation of “Maikol Yordan de Viaje Perdido” is “Maikol Yordan and The Lost Journey,” or something to that effect. But in Tico slang, it basically means “Maikol Yordan is Totally Freaking Lost.” In an effort to save his family farm, Maikol Yordan ends up on a whirlwind tour of Europe – an odyssey that was shot on location in such wondrous places as London, Paris, and Rome.

If you speak fluent Spanish, understand Tico idioms really well, and you are an expert in Costa Rican culture, you may find the movie so funny that you hyperventilate and have to be dragged to CIMA for intensive care. Most expats will miss the dialogue’s subtler references, and if you don’t speak Spanish at all, you’ll probably just squint at the strangely moving lips on the screen.

Should I see it anyway?

Costa Rica has been producing a lot of feature-length films lately, and they all offer a healthy dose of cultural education, from “Caribe” to “Italia 90.” But “Maikol Yordan” holds a special place in the history of Tico filmmaking. Even if you don’t get every joke, most of the people in the movie theater will, and in an atmosphere that upbeat, the experience should feel súper tuanis.