Millions brace for monster blizzard in US Northeast 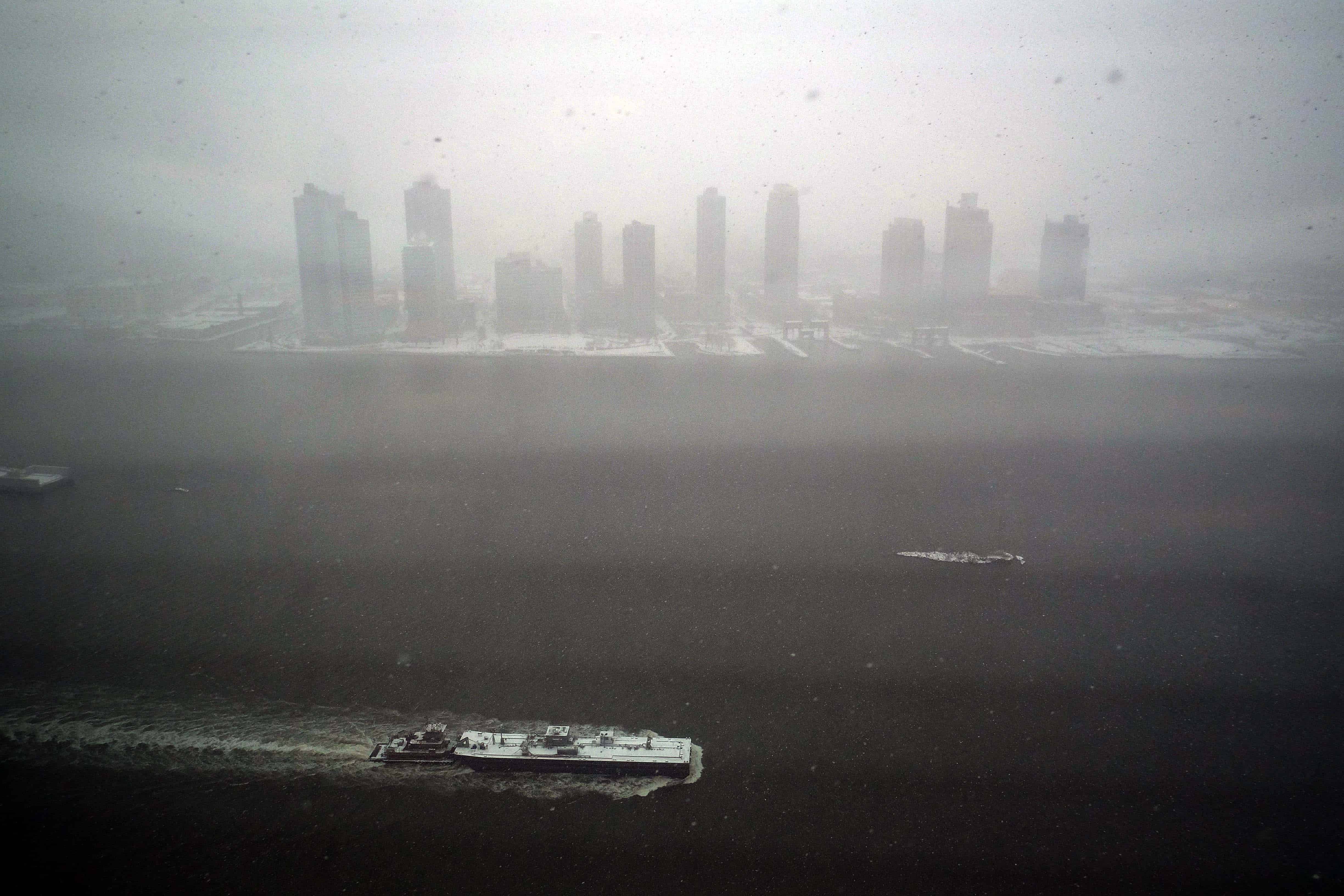 A tugboat sails on the East River during a snowstorm in New York on Jan. 26, 2015. Thousands of flights were canceled as millions of people in the Northeast braced for a winter storm that New York's mayor warned could be one of the biggest blizzards in history. (Jewel Samad/AFP)

NEW YORK – Tens of millions of U.S. residents from New Jersey to the Canadian border braced themselves Monday for a ferocious blizzard that New York’s mayor warned could be one of the worst in history.

Winter Storm Juno is expected to dump up to three feet (around a meter) of snow in parts of the northeast, forcing the cancellation of more than 6,000 flights on Monday and Tuesday.

“It could be a matter of life and death, and that’s not being overly dramatic, so caution is required,” New York state Governor Andrew Cuomo said, as residents stockpiled supplies.

States of emergency were declared in New York and New Jersey, and a travel ban imposed in Connecticut as residents scrambled to get home as quickly as possible and prepare for the worst.

Heavy snow began falling across the region, expected to escalate into a major storm with poor visibility and dangerous winds overnight that will paralyze parts of New York and New England.

The National Weather Service issued blizzard warnings across the northeast. Flood warnings are also in effect, with officials warning against power outages and falling trees.

Cuomo called out several hundred National Guard to be on standby in New York and Long Island.

Commuters poured out of Manhattan offices early, packing out stations as trains laid on extra services to get people home as visibility deteriorated dramatically during the afternoon. People rush to catch their train at Penn Station while a major snowstorm begins on Jan. 26, 2015 in New York City. Andrew Burton/Getty Images/AFP

There will be limited service in the New York subway system after 8 p.m., commuter rail services may close at 11 p.m., and a travel ban could be imposed if weather updates merit, Cuomo said.

Officials said 50 percent of flights at New York’s John F. Kennedy International Airport had been cancelled, but said JFK and the city’s LaGuardia airport would remain open for emergency flights.

Both Cuomo and New Jersey Governor Chris Christie compared preparations for Juno with those for Hurricane Sandy in 2012, which killed more than 200 people and caused months-long power cuts.

New York mayor Bill de Blasio said it would be “most likely to be one of the largest blizzards in the history of New York City.”

“Recognize this as an emergency,” he said. “You can’t underestimate this storm. It’s not a typical storm, its going to pack a real punch.”

From 11 p.m., all non-emergency vehicles were to be banned until further notice, schools will be closed on Tuesday and scheduled examinations cancelled.

The United Nations closed its headquarters early and was to remain closed, forcing the cancellation on Tuesday of an important event to commemorate the 70th anniversary of the Holocaust.

Schools will also be closed in Boston on Tuesday and Wednesday, the city’s mayor said.

Meteorologists said the storm would bring crippling conditions and warned that 28 million people were in the possible blizzard zone.

Christie, a probable Republican candidate for the White House in 2016, said state offices would be closed for non-essential staff and warned that transit systems were unlikely to work Tuesday.

“We’ve had Hurricane Irene, Hurricane Sandy. For better or for worse, we know how to deal with these situations,” he said.

The heaviest snow is likely to be in New England. Thunder and lightning could also accompany the heavy snow, meteorologists said.

Gusts of wind are forecast to reach up to 55 miles (about 90 kilometers) per hour and more than 70 mph in eastern Massachusetts, including Cape Cod and Martha’s Vineyard.

President Barack Obama, on a visit to India, has been briefed about emergency preparations for the storm.

De Blasio said New York had deployed more than 1,800 snow ploughs, and would have 40 percent more ambulances and 500 more fire fighters on duty to cope with the crisis.