Pilot dead as Virgin spaceship crashes in US desert 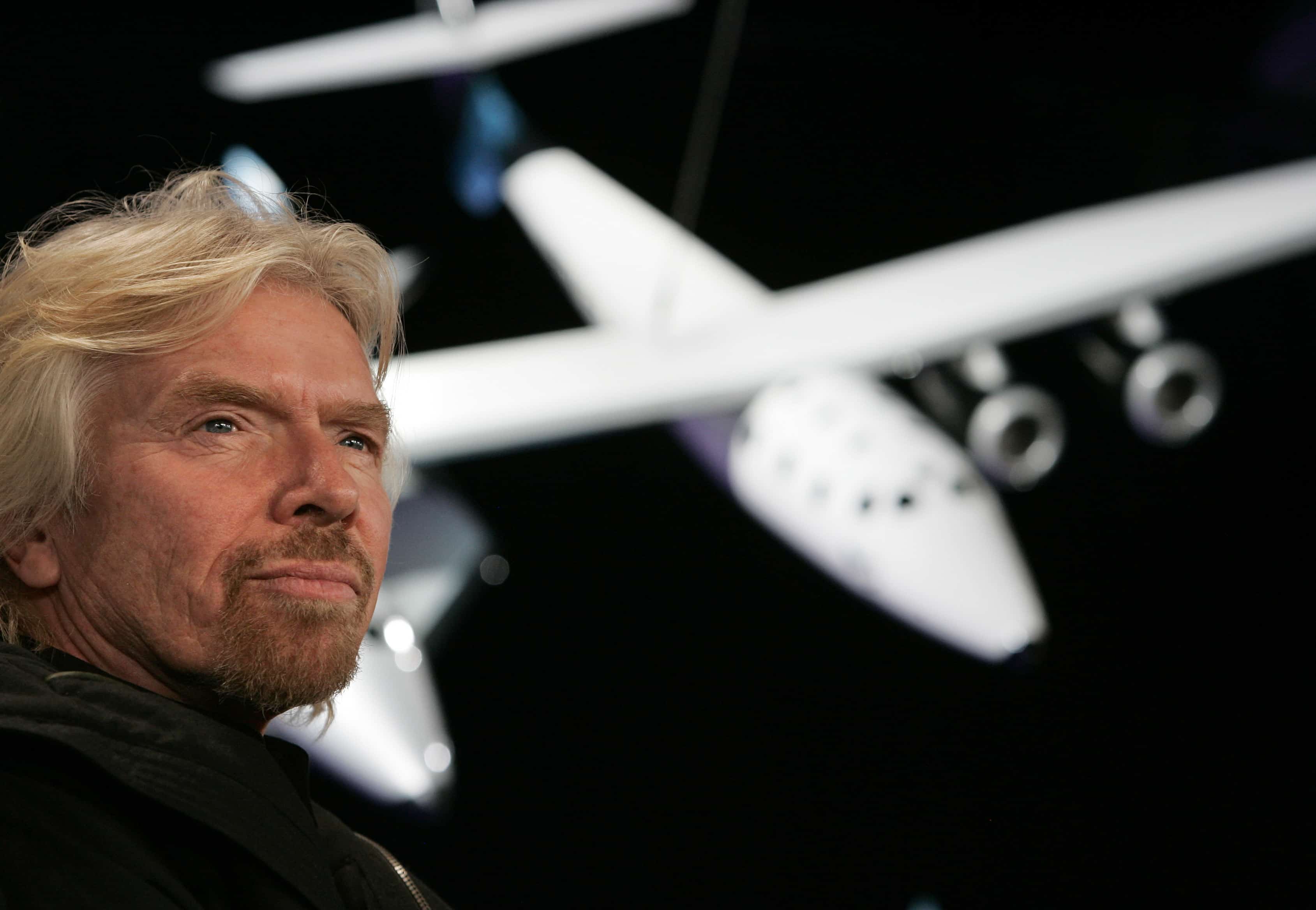 Sir Richard Branson, founder of Virgin Galactic, with a scale model of the Spaceship Two attached to the White Knight carrier aircraft in this file photo from Jan. 23, 2008. (Stan Honda/AFP)

The deadly crash of Virgin Galactic’s spacecraft has dealt a devastating setback to the cause of space tourism, delaying the first commercial flights to the stars by years, experts said Friday.

After several delays, Virgin Galactic had hoped to start ferrying passengers to the edge of space in 2015, ushering in a new era of tourism for those willing and wealthy enough to pay up to $250,000 for the privilege.

But the pioneering dreams of British tycoon Richard Branson were left scattered across California’s Mojave Desert on Friday after the disaster that claimed Virgin Galactic’s SpaceShipTwo and the life of one of its pilots.

“You are not going to see any commercial space tourism flight next year or probably several years after that,” said Marco Caceres, a senior space analyst and director of space studies for the Teal Group, a Washington-based defense and aerospace consultancy.

“This certainly delays any Virgin Galactic commercial flight for at least two years or more.”

He described Virgin as the leader “by far” of the nascent commercial space tourism industry.

Virgin Galactic had already lined up 650 customers for its first flights on the craft, including a slew of celebrities.

The fact that the accident came just days after a private rocket destined to take supplies to the International Space Station exploded shortly after take-off in Virginia on Tuesday will also likely hurt the space tourism industry.

“It will delay this industry and by the same token delay any commercial tourism industry to orbit because the future development of the tourism industry is hinged to suborbital flights,” where passengers experience weightlessness for a few minutes and can enjoy the darkness of the cosmos while admiring the curvature of the Earth, Caceres said.

“[Suborbital tourism] will attract the attention, the excitement of the public and if you delay this, the other of course is going to be delayed.”

Caceres said Virgin Galactic will now need to carry out a far greater number of tests before commercial flights could become a possibility.

“Unfortunately there just have not been enough test flights with this vehicle. This was the downside,” he said.

“They are doing a lot of testing on the ground but they are not doing enough in flight. They need to fly much more before they begin the commercial.”

SpaceShipTwo was carried into the upper reaches of the atmosphere by a four-engine dual fuselage aircraft before being released and blasting off on a suborbital flight for around three hours. The craft is designed to carry two pilots and six passengers.

Branson had vowed to be on the first flight next year along with his son. Virgin Galactic in May obtained authorization from the Federal Aviation Administration to launch its flights from a base in New Mexico to be named “Spaceport America.”

Stars such as Leonardo DiCaprio and Ashton Kutcher had been among those reportedly planning to take Virgin Galactic’s first wave of flights.

John Logsdon, former director of the Space Policy Institute at George Washington University, said the crash would have a sobering effect.

“This will inject a note of sobriety into the enthusiasm of those who would like the spaceflight experience,” Logsdon said.

“There was a whole juggernaut of ground training and private spaceports that were being set up to support an emerging space tourism industry, with a collective burst of maybe unrealistic expectations.

“This will certainly throw cold water on that.”

LOS ANGELES, California – Virgin Galactic’s pioneering spacecraft designed to take tourists into space crashed Friday in California, killing one of the two pilots and scattering debris across the desert.

Television images showed the wreckage of SpaceShipTwo, a test vehicle that flies to the edge of space, amid brush east of Mojave, a few hours’ drive northeast of Los Angeles.

The incident is second disaster involving a U.S. spacecraft this week, after an unmanned Orbital Science rocket carrying supplies to the International Space Station exploded after launch on Tuesday.

It is also a huge blow to British tycoon Richard Branson’s long-held dream of offering the first passenger space flights, which have been snapped up by celebrities including Leonardo DiCaprio.

The Virgin chief said he was heading straight to the site.

“Thoughts with all @virgingalactic … I’m flying to Mojave immediately to be with the team,” he wrote on Twitter. It was not clear where the globe-trotting tycoon was at the time of the crash.

“During the test, the vehicle suffered a serious anomaly resulting in the loss of SpaceShipTwo. Our first concern is the status of the pilots,” the firm said in a tweet.

Virgin Galactic said the fate of the pilots was unknown, but the California Highway Patrol confirmed reports that one pilot had died another was serious injured, and taken to hospital.

“We will work closely with relevant authorities to determine the cause of this accident and provide updates as soon as we are able to do so,” Virgin said.

The spaceship had been carried aloft on a bigger aircraft known as WhiteKnightTwo and then released for a test of its rocket engine above the Mojave desert, the latest in a series of tests.

“SpaceShipTwo has been released by WhiteKnightTwo, and is now flying freely,” the firm wrote in a blow-by-blow account of the flight, adding: “Ignition! SpaceShipTwo is flying under rocket power again.”

The next tweet announced the “anomaly” followed by a series confirming the crash. The company added that WhiteKnightTwo had landed safely after the accident.

The U.S. air safety agency, the National Transportation Safety Board (NTSB), said it was sending a team to the site of the crash.

More than 500 people have already reserved seats — and paid a deposit on the $250,000 ticket price — for a minutes-long suborbital flight on SpaceShipTwo, which can carry six passengers.

It is the commercial version of SpaceShipOne, the first private spacecraft to reach the edge of space in 2004, and which is now on display at the National Air and Space Museum in Washington.

Private companies are rushing to fill the gap left by NASA, which ended its 30-year shuttle program in July with the completion of the final Atlantis mission to the International Space Station (ISS).

Here's how #SpaceShipTwo compared to the 1st @virgingalactic craft and the @NASA space shuttle pic.twitter.com/l44Z4yrT80

DiCaprio and fellow actors Ashton Kutcher and Demi Moore are among those already reported to have booked their place.

Earlier this year, “Titanic” star DiCaprio auctioned off a trip with him into space, raising 700,000 euros.

Friday’s incident is the second involving an American spacecraft this week, after the Orbital Science rocket exploded six seconds after launch on a resupply mission to the ISS.

Initial investigations into that explosion centered on the pair of rocket engines providing its thrust, which were made during the Soviet era and refurbished.

The Ukrainian-designed AJ-26 engines date back to the 1960s and 1970s, and Aerojet Rocketdyne of Sacramento, California, has a stockpile that it refurbishes for Orbital Sciences.

The show, which was commissioned last year, pits contenders against each other to win a flight on the Virgin Galactic spacecraft, according to entertainment industry journal Variety.