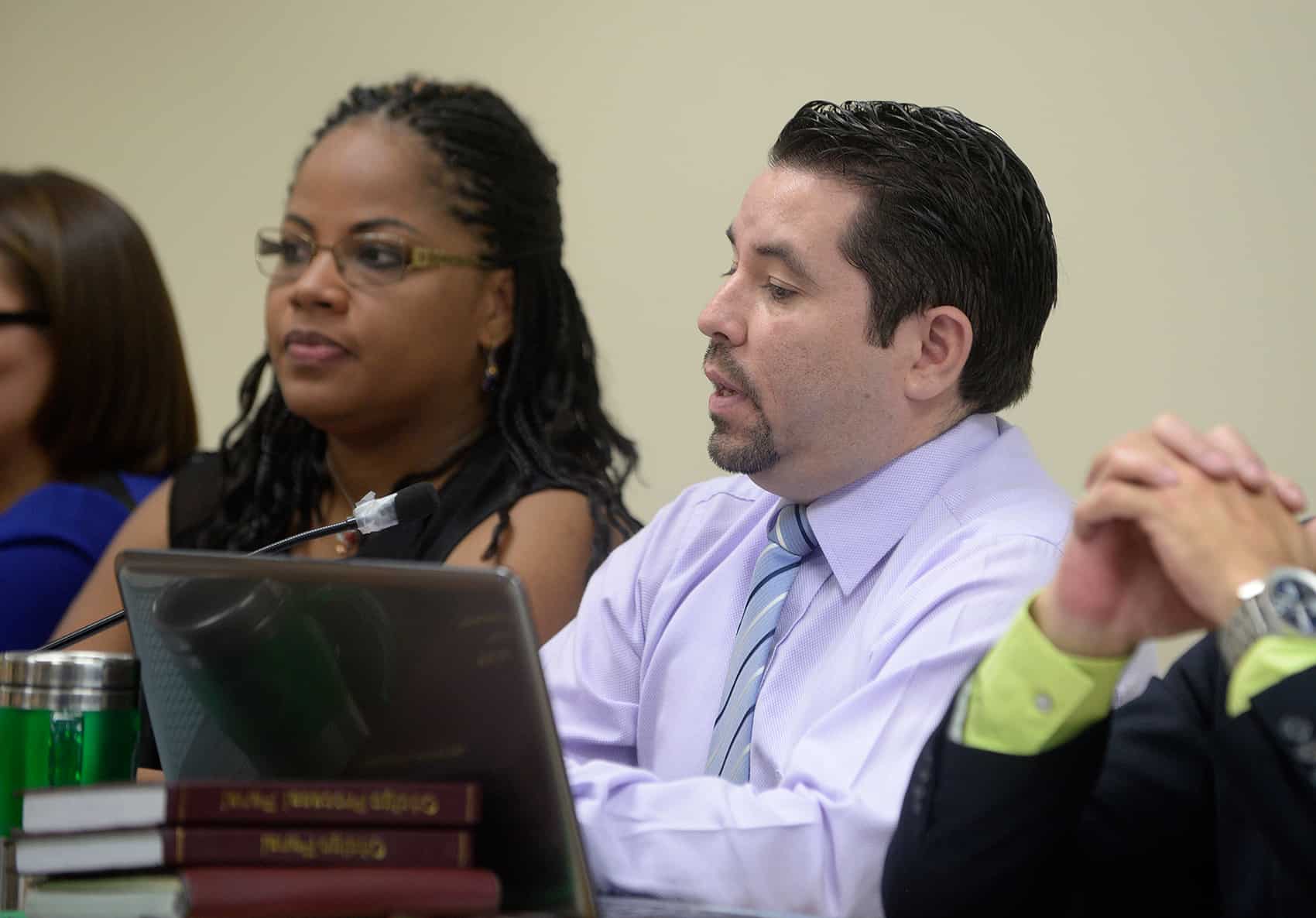 Roderigo Araya, right, an attorney for the family of Jairo Mora, asks judges to delay proceedings until all the defendants are present. The much-anticipated murder trial of seven defendants accused of killing the conservationist last year was slated to begin Monday morning, Oct. 27, 2014. (Lindsay Fendt/The Tico Times)

This story is developing – follow ticotimes.net for updates. For recommended reading, see our special reports: Why Jairo died and Little has changed 1 year after slaying of Costa Rica conservationist Jairo Mora.

LIMÓN – The murder trial for seven defendants accused of killing Costa Rican sea turtle conservationist Jairo Mora last year was delayed on Monday because one of the defendants allegedly is receiving medical care and is unable to attend.

The long-awaited trial in the highly monitored case was to begin early Monday morning in a courtroom in the Caribbean city of Limón, near where Mora was killed in May 2013. But judges delayed the proceedings after Ernesto Enrique Centeno, one of the defendants, failed to appear in court, citing medical reasons. But neither defense attorneys nor judges had specific details about the nature of Centeno’s illness.

“It is a fundamental right for the accused to be present during his trial,” one of the defense attorney’s, Luis Ling, argued Monday morning. “To start the trial without him would violate that right.”

Centeno was among seven suspected turtle poachers arrested in July 2013 and accused of killing Mora, a 26-year-old sea turtle conservationist, on the Caribbean coast’s Moín Beach, north of Limón. The defendants also are accused of kidnapping four foreign women volunteers during the same incident. Mora and the volunteers were patrolling the beach to protect nesting sea turtles on the night of May 31, 2013 when they were attacked, kidnapped and held at gunpoint. Mora was badly beaten and dragged naked behind a car on the beach. The official cause of death was suffocation from sand.

Prosecutors initially asked judges to start the trial without Centeno, but they eventually agreed to a delay after hearing the defense’s arguments.

“For us the most important thing is that this is a clean trial,” said Roderigo Araya, an attorney representing Mora’s family who is collaborating with prosecutors. “We don’t want this case to get thrown out or to force a retrial.”

The court now will consult with prison doctors on Monday afternoon to determine when the trial could continue, possibly on Thursday.

Twenty-six witnesses are scheduled to testify in the trial, which likely will last until early December.

Read all of our coverage of the Jairo Mora case here.