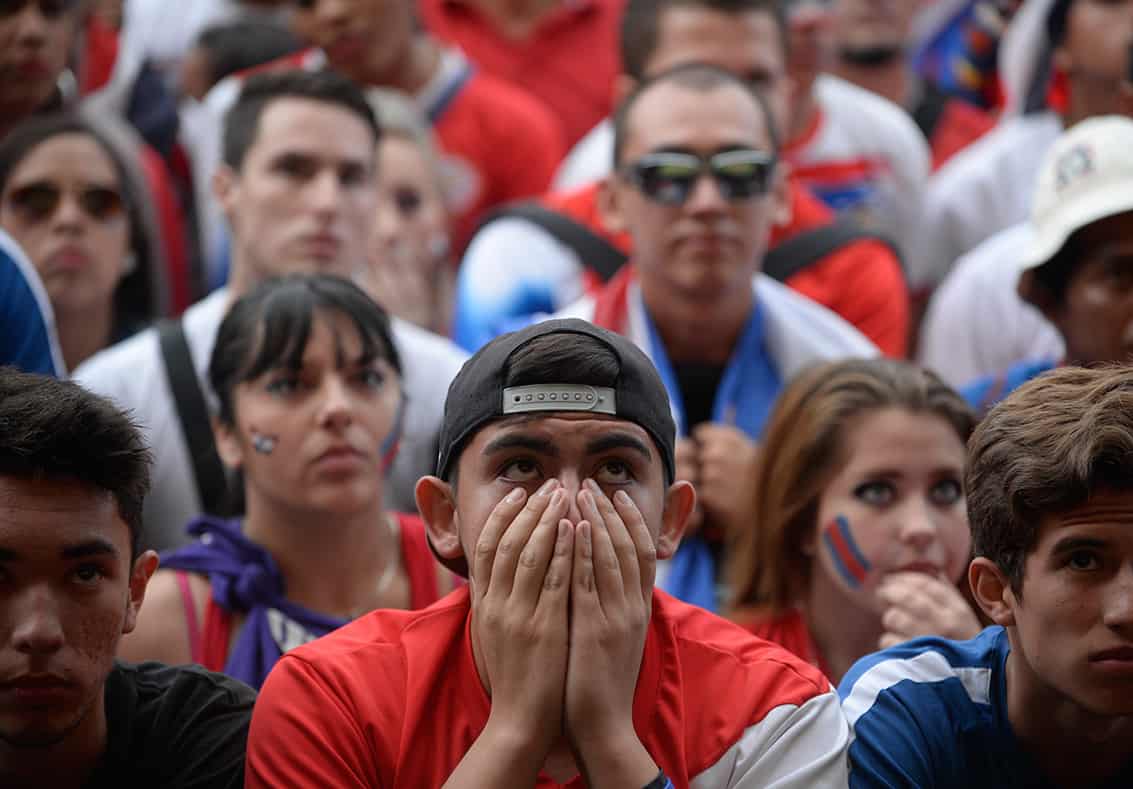 Costa Rica fans watch as their national team heads into penalty kicks during the quarterfinals of the World Cup. The Ticos held the Dutch scoreless throughout regular and extra-time play, losing only in a penalty shootout. (Lindsay Fendt/The Tico Times)

Though the game didn’t start until 2 p.m., San Josefinos in Costa Rica’s capital city woke up to the sound of vuvuzelas. By the afternoon, Costa Rica’s first appearance in the quarterfinals of the World Cup had completely paralyzed the city.

East of the capital in San Pedro, college students from the nearby University of Costa Rica gathered en masse at bar Terra U, where a line wrapped around the block to get in to the already packed two-story building. Overflow from the other bars flooded the streets of San Pedro, blocking cars and taxis from reaching the main road.

“La Sele is getting better every time,” said 25-year-old Alexander Acevedo. “We are making rivals of giants, we are destroying world champions.” Police dressed in full riot gear stood guard at the entrance to the capital’s traditional celebration spot, the Rotonda de la Fuente de Hispanidad, but frequently wandered from their post to stare at a large TV screen facing the road.

Further west, in the city’s center, thousands of fans packed into the Plaza de la Democracia to watch the game on a big screen. A red, white and blue grim reaper stood with his scythe among the crowd, repeatedly shouting for the heads of the Dutch players. Another man in a pirate hat covered in voodoo dolls approached the screen, placing a live rooster on the stage as if offering it to the football gods. Draped in flags and donning red La Sele jerseys, the fans watched as their team battled against a much bigger Dutch squad, holding them scoreless for an incredible 120 minutes of regular and overtime play.

Before the game headed into extra time, violence erupted near the front of the Plaza de la Democracia. Three men fell to the ground after being stabbed by unknown assailants as police in riot gear streamed into the crowd, pushing fans into a wide semi-circle around the injured men.

Most fans seemed unfazed by – or unaware of – the bloodied men laid out in the plaza, and continued cheering as the Ticos headed into a penalty shootout. Others, presumably close to the incident, left the plaza crying. Paramedics arrived on scene to carry out the injured fans on stretchers, and shortly after police retreated, the crowd rushed towards the stage to continue watching the game. As the game passed to penalty kicks, the plaza grew quiet. One fan crossed himself, evoking the divine, as tears silently rolled down his cheeks. As the first goal slid past substitute Netherlands goalkeeper Tim Krul, the crowd went wild. But when Ticos Bryan Ruiz and Michael Umaña missed their penalty shots, and Sele goalkeeper Keylor Navas was unable to add a save, there were loud groans.

Defeated, some left the plaza. Others stood still, shocked. Three men near the stage broke out into tears. Many fans shouted, “¡Viva la Sele!” and then marched to the Rotonda de la Hispanidad to celebrate what has been an historic run.

“It’s too bad that we didn’t win,” said Kevin Mora, 24, “but it’s a great example for future world champions in the next generation to get inspired by what the Sele did today.”