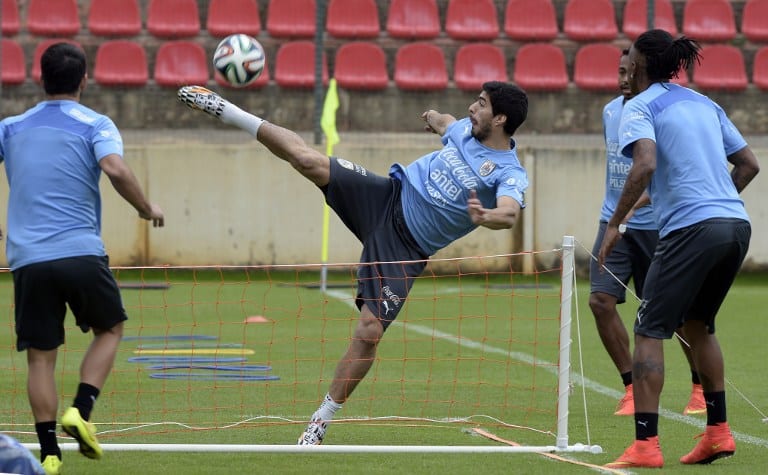 Uruguay's forward Luis Suárez kicks the ball during a training session at the team's training site in Sete Lagoas on Thursday. (AFP)

Suárez underwent an operation on his knee on May 22 and has since been facing a race against time to play any part in the World Cup group stages.

He recently dismissed speculation he would even be fit for Uruguay’s second match against England a week on Thursday in São Paulo.

“Given what he’s said we’re not expecting him to play and we’re working on other options with other players,” said PSV Eindhoven forward Ruiz.

Even if Liverpool forward Suárez is fit, Ruiz, whose parent club is Fulham, says his teammates will be ready.

“I played against him in Holland [when Suárez was at Ajax and Ruiz at FC Twente] and in England and the defenders have been warned about what can happen, about his style of play,” added Ruiz, 28.

Young midfielder Yeltsin Tejeda is one player hoping not to line up against Suárez on Saturday.

“Suárez is a player the whole world knows about, he’s scoring so many goals in England,” said the 22-year-old, who plays for Saprissa in his homeland.

“If he’s not there it will be to our benefit. [But] we can’t just think about Suárez, there’s [Edinson] Cavani and [Diego] Forlán and other players who score goals.”

Veteran forward Forlán also had to sit out of a Wednesday training session ahead of the World Cup because of a digestive problem. The 35-year-old was one of the stars of the last World Cup in South Africa, being awarded the Golden Ball for best player of the tournament.

With Luis Suárez, who has a knee injury, unlikely to be fit for Saturday’s first match against Costa Rica, Forlán is expected to play an important role. He returned to practice Thursday.

Costa Rica suffered a blow earlier with the news that fullback Heiner Mora has had to withdraw from their squad because of a broken heel.

The 29-year-old suffered the injury in a training session on Tuesday at their base in Santos.

Dave Myrie has been called up as a replacement.

Myrie, 26, made his international debut in 2010 but has had a nomadic club career taking in 10 clubs in four different countries.

Meanwhile, Uruguay defender Diego Godín says his side’s only aim at the World Cup is to get through their tough group, which also includes Italy.

“We’re confident and we believe in our potential. We’re dreaming just like the three million Uruguayans are dreaming that things go spectacularly well for us,” he said. “With our feet on the ground, we’re not thinking beyond the match with Costa Rica.