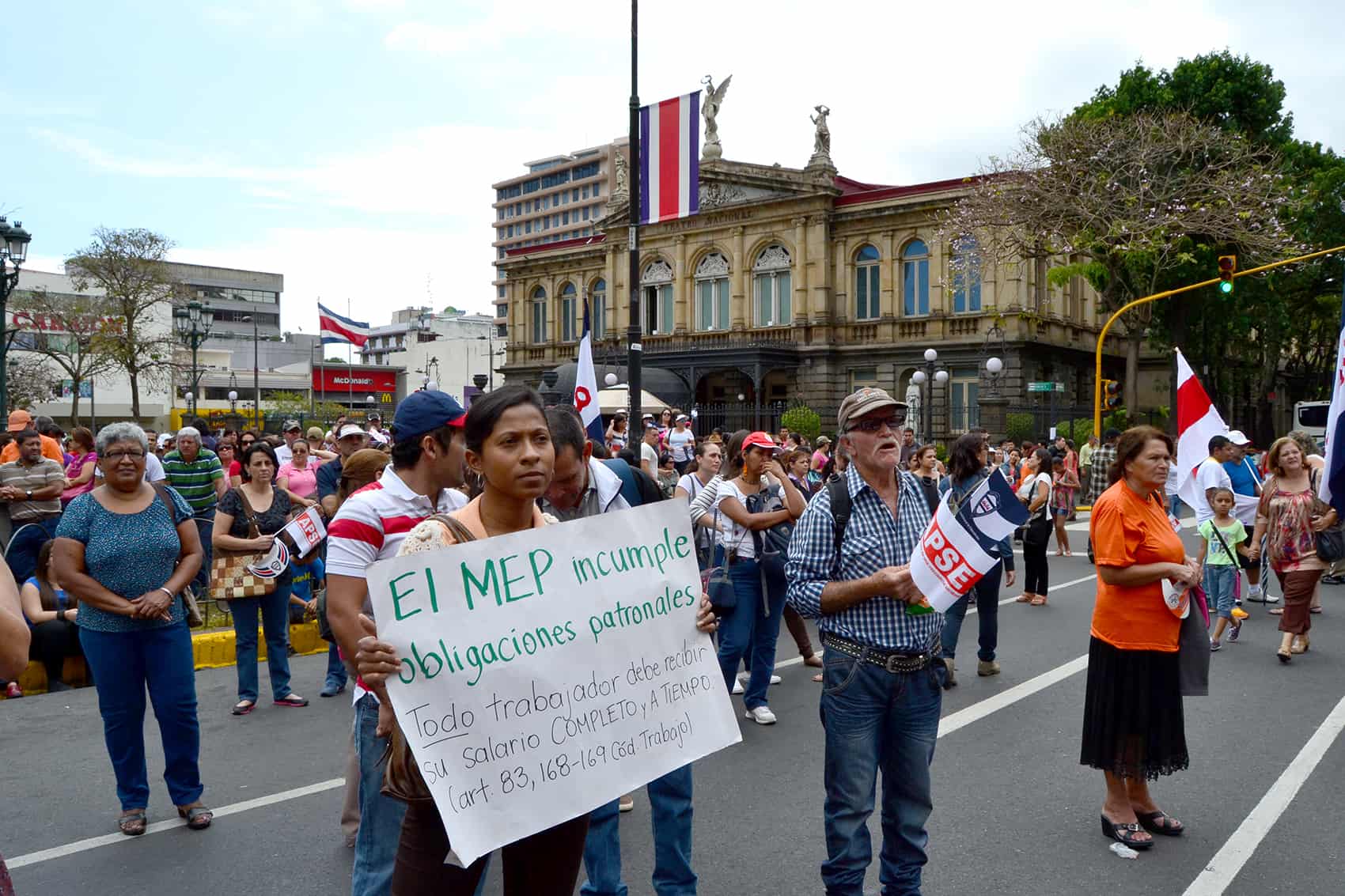 Thousands of teachers march to the Finance Ministry in downtown San José on Monday, May 5, 2014. (Fabiola Pomareda/The Tico Times)

Thousands of teachers filled San José’s Second Avenue Monday, marching from the Parque de la Merced to the Finance Ministry to protest a new government-run payment system that has left them without salaries for months.

An indefinite strike began this week called by several teachers unions, including the National Teachers Association (ANDE), the High School Teachers Association (APSE) and the Costa Rican Educators Union (SEC). Meanwhile, outgoing Education Minister Leonardo Garnier prepared to pass on the fiasco to his replacement in the new administration.

Just three days before incoming Education Minister Sonia Martha Mora takes office, there seems to be no agreement on the horizon, although the Education Ministry [MEP] said on Monday that teachers could be paid as early as May 13. The problem stems from a decision by the current administration of President Laura Chinchilla to begin using a new teacher database system just weeks before leaving office. Due to what officials have described as a “technical problem,” APSE said at least 6,000 educators haven’t received salaries, some since February.

One of the teachers working without pay, Ana María Fernández, from the Colegio Técnico Profesional Carrizal in Alajuela, said she was asked in April to lead 40 one-hour classes per week.

“This mess started with [MEP’s] naming of educators, because it started too late. We were in April and they had just begun naming the teachers. They knew all these kids would be left without classes and they still hadn’t named [teachers]. Those who went ahead and taught, yet weren’t officially named, didn’t get paid,” she said.

To date, Fernández said she’s received only about half of her salary.

“Since the ministry changed its database, we have no idea how many classes we’ve taught, nor if they’re paying us the right amount,” she said.

Fernández, like many, hopes her salary situation will be corrected on May 13.

Delia McCarthy, director of the 15 de Septiembre School in Hatillo, said the school’s 35 teachers haven’t been paid in full either, and they plan on striking indefinitely until the problem is resolved.

“We can’t survive this any longer,” McCarthy said. “Some of us have to pay our children’s high school and college, not all of us own our own homes, we’re in debt, and [banks] won’t lend us more money. How are we supposed to pay our bills?” At McCarthy’s school, the ministry still must name one teacher.

“I’m the school’s director, and I’m teaching classes because [MEP] didn’t issue the names on time. We do what we have to for the kids, but we’re not being paid overtime for this,” she said.

In January 2013, Costa Rica’s Comptroller General’s Office (CGR) reported on the chaotic management of payrolls at MEP. In some cases, teachers were overpaid, and in others, payment was delayed. The Comptroller discovered that MEP had no registry of files sent to the Finance Ministry in order to recover the excessive payments and mistaken overtime pay.

To establish order, MEP decided to utilize a system called Integra II to streamline the process between the two ministries. MEP promised to implement the system before Chinchilla’s term ends on May 8. It began the transfer in April.

But entering data in Integra II was an overwhelming task, and the ministry’s workers were unable to keep up.

John Vega, a social studies professor at an adult education center in Santa Ana, southwest of the capital, and a member of APSE, said that an APSE administrative disputes tribunal has processed more than 1,000 complaints per month regarding back pay owed for bonuses and other salary incentives.

“They said the delays would be resolved by the Integra II system, but really it only created more problems,” Vega said.

MEP asked teachers to email the ministry in order to receive a payment voucher, but several teachers said they’ve sent emails a week ago and have received no response. Others said they received an email with a payment amount due, but no information on the classes being reimbursed, nor for what schools, nor if any deductions have been included.

According to Vega, the strike has three goals: first, that officials “pay workers up to the last colón owed, because no worker should have to wait for an employer to comply with obligations.”

Second, each teacher is entitled “to have access to information regarding what exactly is being paid, because currently no worker knows if they’re being paid a biweekly or monthly amount, or if any amount has been deducted,” he said.

And third, “those who are responsible for this chaos should be punished, because this was provoked by high political officials, and while some of them will leave MEP on May 8, that doesn’t mean that they are no longer responsible,” Vega added. In a press conference Monday morning, Garnier did not discuss blame, saying only that the setback was caused by technical problems and not the lack of a will to solve them. He said that implementing Integra II to manage payrolls was a positive step, because it helped prevent even more teachers from being affected.

At a May 3 meeting with APSE, incoming minister Mora said the payment delay would be the new administration’s problem as of Thursday.

APSE President Ana Doris González called on teachers who haven’t participated in the nationwide strike to do so.

“Any teacher who hasn’t yet joined the strike is sending a message to employers that it’s OK to work for free,” González said.

González told The Tico Times that on Tuesday, a closed-door meeting would be held with leaders of teachers’ union and government officials.