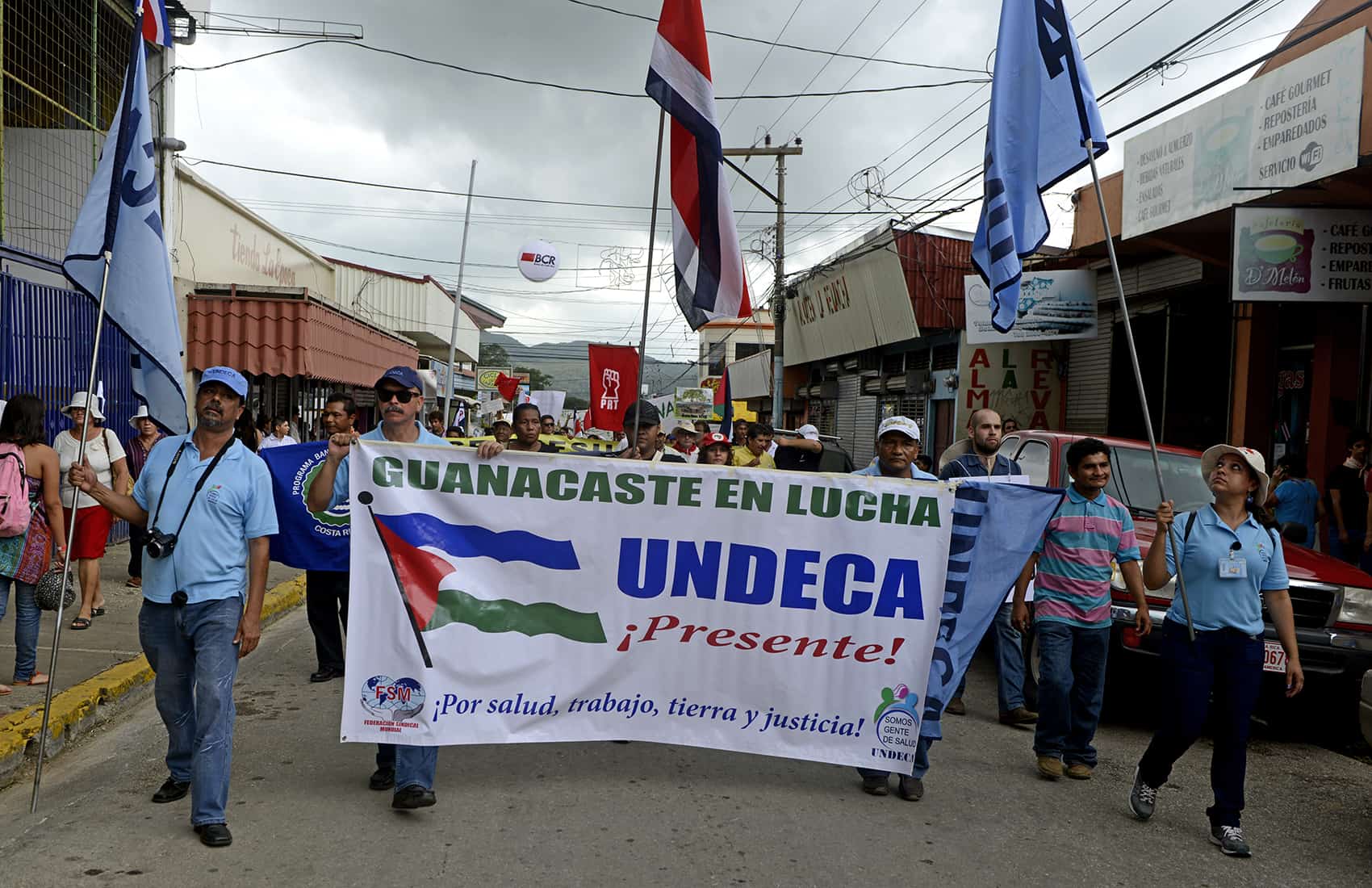 Protesters march during the celebrations for the annexation of Guanacaste last year. Many complained about high levels of arsenic in their drinking water. Two recent reports this week by The Voice of Guanacaste show the problems isn't going away. (Lindsay Fendt/The Tico Times)

Arsenic levels remain dangerously high in the drinking water in the northwestern province of Guanacaste. The Voice of Guanacaste, the province’s bilingual newspaper, reported the results of two new arsenic studies this week.

Water samples taken March 10 from the city of Bagaces showed unsafe levels of arsenic for the city and the surrounding communities of Montenegro, El Chile, Arbolito, El Recreo and Finca San Miguel, The Voice of Guanacaste reported. The results conflict with a May 2013 certificate from the National Water and Sewer Institute that claimed the water in Bagaces was potable.

Another study by the Costa Rica Institute of Technology (TEC), analyzed 20 people from the community of Aguas Calientes, where residents consumed water containing 71 micrograms of arsenic per liter – more than 10 times the amount allowed by the World Health Organization – for at least 18 years.

TEC’s study found that some residents displayed symptoms of chronic arsenic poisoning. One 19-year-old woman showed signs of changes in her skin pigment and skin lesions. Other people showed no symptoms, despite the traces of arsenic present in their urine samples.

Recommended: What is killing the young men of Cañas?

The region is also subject to abnormally high instances of renal failure, a problem commonly attributed to high arsenic levels by the public. However, experts in the field and the TEC study ruled out arsenic as a cause for kidney problems.

From the study (translated by The Voice of Guanacaste):

In the country of Bagaces and the community of Agua Caliente, renal problems cannot be attributed to the ingestion of arsenic in drinking water.

The lack of potable drinking water has been a struggle in Guanacaste for years, with water shortages and high arsenic levels afflicting mostly poor rural communities. In 2013, the Constitutional Chamber of the Supreme Court issued an order to President Laura Chinchilla to resolve the province’s arsenic problem, but little has changed, according to The Voice of Guanacaste, beyond distributing filters containing rusty nails to neutralize the arsenic.

The water issue was at the center of last year’s Guanacaste Annexation Celebrations, when protesters from the People’s Voice Association of Bagaces, an organization created to combat the water and arsenic problem, protested the government’s failure to respond.

“We’re looking for someone who can tell us what is killing us, what is in our water and our environment that is killing us. No one has given us an answer and that’s why we’re angry and frustrated and here today,” Mainor Picado Camareno, of the People’s Voice Association of Bagaces, told The Tico Times at the march last year.