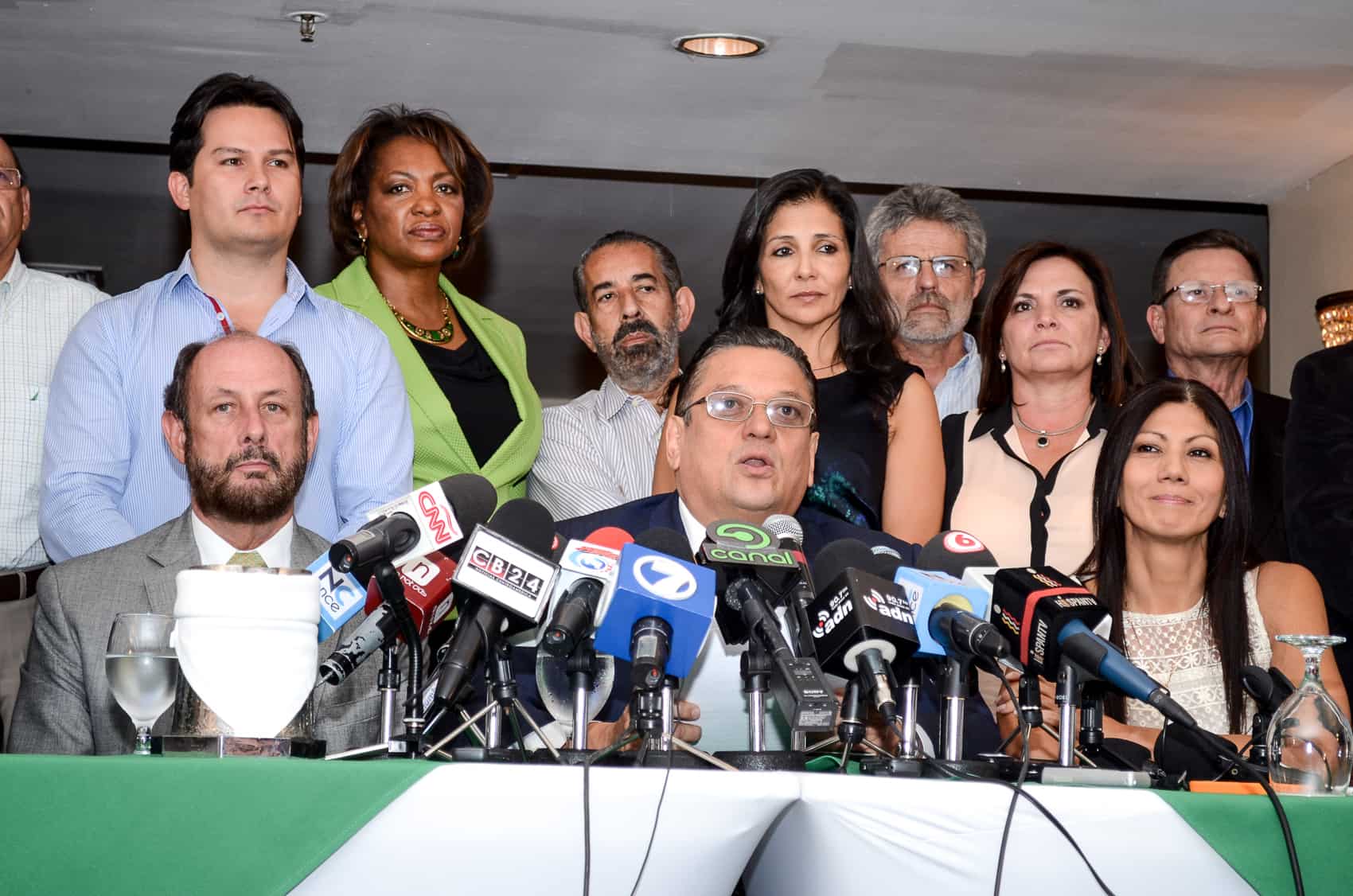 Faced with a 44 percent potential vote deficit in the April 6 runoff, ruling party candidate Johnny Araya, center, announces on March 5 in San José that he is dropping out of the race, leaving Luis Guillermo Solís as Costa Rica’s next president. (Alberto Font/The Tico Times)

At 1:30 p.m. on Wednesday, March 5, the National Liberation Party’s Johnny Araya made history by becoming the first candidate to drop out of a presidential runoff race in Costa Rica.

Araya, 56, made the announcement to a packed Salón Chirripó at Hotel Corobicí, in western San José. Reporters and Liberation party faithful had waited hours for the much-anticipated speech.

“The campaign for the second round of voting is very difficult and full of obstacles. Resources and time are as limited as the work ahead is extensive,” Araya said. “Prudence suggests we shouldn’t spend millions of colones on political propaganda and meetings. … I will abstain from all electoral activities.”

Araya’s decision to drop out of the race followed the first runoff poll, published Tuesday night by the University of Costa Rica’s Semanario Universidad. The poll gave opposition candidate Luis Guillermo Solís, of the Citizen Action Party, a resounding 44 percent lead ahead of the April 6 runoff.

After news of Araya’s pending press conference spread like wildfire in local media and on social media Wednesday morning, Solís canceled a planned trip to Washington, D.C., and remained at his San José home among dozens of supporters to await the announcement.

“Thank you, thank you,” the former candidate, who served as mayor of Costa Rica’s capital San José for more than two decades, said as he worked his way through the crowd.

Costa Rica’s Constitution prohibits a presidential candidate from withdrawing from a second-round vote, and Araya campaign manager Antonio Álvarez Desanti said the electoral campaign would continue until an April 6 vote, but Araya would now focus on holding a “national dialogue” on pressing issues facing the country.

“Since my infancy and youth I’ve been inclined toward public service, inspired by those who came before me,” Araya said. “I reaffirm my commitment to public service and my intention to continue in politics.”

Araya said in coming months he would focus on rebuilding the National Liberation Party, which following half a century of political domination in the country seems to be unraveling, replaced by opposition parties like PAC and the Broad Front Party, whose candidate, José María Villalta, was expected to reach the second round but captured only 17 percent of the national vote.

“I confess to you that there are no adequate words to express my gratitude to all who gave me their hearts,” Araya said, adding, “God pays back so much generosity. … This isn’t goodbye, but rather, so long for now.”

Costa Rica announced 14 new coronavirus-related deaths over the last day for a total of 1,236, according to official data…

The Pan American Health Organization (PAHO) warned Wednesday that misinformation threatens the response to Covid-19 in the American continent, in…